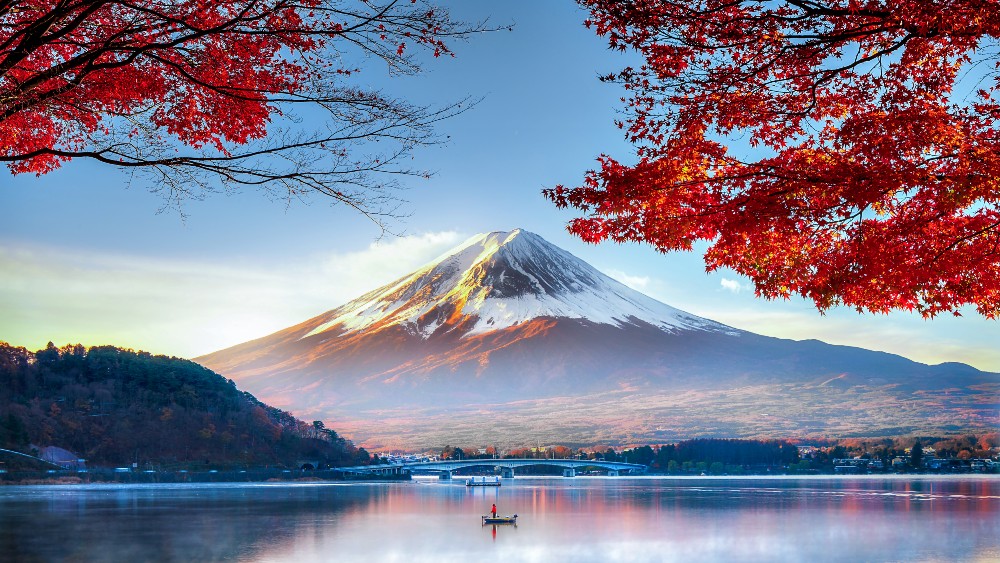 A small, largely off-the-grid hot spring town best known for churning out some of the country’s best wasabi along Japan’s Izu Peninsula, Shuzenji was gearing up to host a series of cycling events for the upcoming Tokyo 2020 Olympics when I happened to pass through on my way back from Mount Fuji in February 2020. A month later, Japan closed its doors for the next two and a half years, and I haven’t stopped thinking about that town: What did they end up doing with all those Tokyo 2020 flags lining the lampposts and storefronts? And why on earth didn’t I try that wasabi ice cream when I had the chance?

So when the news broke that Japan would reopen to travelers from 68 countries including the US, UK and Canada visa-free on October 11, anticipation to return for both first-time travelers and Japanophiles like myself started to mount.

“Since the reopening was announced a few weeks ago, our phones have been ringing off the hook,” says Catherine Heald, CEO of luxury Asia tour operator Remote Lands. “Two and a half years of pent-up demand for luxury travel to Japan has come roaring back.”

Yet it will take some time for numbers to approach pre-pandemic levels. “It felt like I was going back in time to my first trip to Japan in 1989,” says Heald, who recently returned from the country. “With very few tourists, we had the temples and gardens to ourselves, and dinner reservations at coveted restaurants like Jiro were a breeze.”

Recent post-pandemic travel requirements to Japan included booking through a government-approved tour operator and obtaining a visa and ERFS certificate. But with the relaxing of these mandates today, some are anticipating a golden age of travel to the country.

“The rest of this year offers a rare chance to experience Japan before the crowds return in 2023,” says InsideJapan’s Jeff Krevitt. “Japan is always magical, but if you’d like to have the magic all to yourself, 2022 and early 2023 could be a once-in-a-lifetime opportunity.”

Aside from the lack of crowds, there’s also a slew of new openings to explore—from hot spring hotels in Hokkaido to towering skyscrapers in Tokyo and contemporary ryokans in Kyoto. We’ve rounded up some of the splashiest ones to bookmark for your next visit.

Reach for the stars in Tokyo

The sky’s the limit when it comes to luxury hotels in the capital. Occupying seven floors of a brand-new ultra-skyscraper in Ginza, the hotly anticipated Bulgari Hotel Tokyo is arriving in early 2023 with 98 rooms and suites. In the meantime, the sleek Tokyo Edition Toranomon in the bustling Roppongi district—Japan’s first Edition property—has two of the sexiest new spots in town: book a table at The Jade Room and Garden Terrace, then grab a classic cocktail at Gold Bar. Then later this year, Tokyo Edition Ginza will open in the popular Chuo Street shopping district with 86 luxury rooms and suites. Ryokans, or Japanese inns, are a more traditional alternative to skyscraping resorts; for an urban ryokan experience in the heart of the city, check in to the beloved Hoshinoya Tokyo. You’ll receive a complimentary kimono to wear around the property upon arrival—just don’t forget to take your shoes off before you set foot on the scented tatami mats.

Set between Tokyo and Kyoto in Hakone National Park, Gen Hakone Gora, a.k.a “The Gen,” reopened this year after undergoing major renovations that transformed the former ryokan into a luxury six-key boutique stay. Each of the spacious rooms comes with its own balcony-side hot springs, perfect for soaking up the scenery of Hakone and Mount Fuji in the distance. Kai Poroto opened earlier this year on Japan’s northernmost island of Hokkaido, blending local culture and architecture inspired by the indigenous Ainu people. The 42 rooms offer views over the lake, and the on-site onsen is filled with a rare type of Shiraoi water brimming with organic materials derived from plants. Venture north into the mountains of Hokkaido and you’ll land in Niseko Village, where snowbirds will love Higashiyama Niseko Village, a Ritz-Carlton Reserve. The first Ritz-Carlton Reserve property in Japan—and only the fifth in the world—with just 43-rooms and seven suites set directly at the base of Mount Niseko Annupuri, the hotel opened in 2020 and still has that new-hotel glow (not to mention a world-class spa and onsen at Spa Chasi La Sothys).

The cultural heart and tourist hub of Japan, Kyoto has lately seen some of the country’s most exciting new hotel debuts. The first Asian addition to Hilton’s luxury line of LXR Hotels & Resorts, Roku Kyoto opened at the end of 2021. The 114-key retreat includes on-site fine dining, a dreamy riverside terrace and ROKU Spa and onsen, making this modern mountainside oasis a luxurious one-stop shop. If it’s a traditional ryokan you’re after, the Shinmonzen opened on a sleepy street in the Gion district, and with only nine luxurious yet minimalistic suites overlooking the river offers a true sense of place within this historic city. Bringing some fancy French allure to , Fauchon Hotel Kyoto also opened last year with 59 rooms and suites—with pretty pops of pink, it’s every bit as fabulous as its Parisian predecessor.

Across from Kyoto’s early 17th-century Nijo-jo Castle and through Kajiimiya Gate lies Hotel The Mitsui Kyoto, one of Kyoto’s most sophisticated stays, infusing Japanese touches like a traditional afternoon tea ceremony and morning breathing sessions with 161 contemporary rooms—each with stone bathtubs and some with their own natural onsen. The retreat also has two signature restaurants and an elegant garden bar, but perhaps the most stunning feature is the dramatic ground-floor thermal spa. Just around the moat from the Mitsui, Garrya Nijo Castle Kyoto is the first of Banyan Tree Group’s wellness-centric hotels in Japan. Featuring 25 rooms, seasonal French fare served at the restaurant Singular, and a Wellbeing Room for restorative exercises and yoga, this tranquil retreat is in the heart of Kyoto.

In the middle of a forest in Okinawa, the completely sustainable, carbon-negative Treeful Treehouse opened last year with two design-forward treehouses that have been seamlessly integrated into nature. Built along the Genka River, Aero House and Spiral Treehouse both have sweeping 360-degree treetop views and swoon-worthy interiors. Aman founder Adrian Zecha debuted a new concept last year on the Seto Inland Sea island of Ikuhi: Think of Azumi as a modern ryokan, combining traditional sensibilities with global standards. Over on Awaji Island, off the coast of Kobe, Zenbo Seinei opened this spring with plenty of Zen vibes, natural hot springs, yoga, tofu-based dining and wellness offerings that include calligraphy courses, aromatherapy sessions and yoga. Fukue Island’s okcs Retreat Goto ray has 26 guest rooms, all of which face the ocean and come with open-air baths. Don’t miss a treatment at the spa, which combines Western hydrotherapy with age-old Eastern practices.

On Japan’s southern island of Kyushu, Hoshino Resort Kai Yufuin opened just outside of Beppu this summer 45 rooms, each with its own individual hot springs surrounded by the nature of Mount Yufu. And for one of the most unique retreats in Japan, guests can book the iconic Hirado Castle in Kyushu’s Nagasaki Prefecture. Originally built in 1559, the historic castle sits at the base of Japan’s oldest trading port in the northernmost tip of Nagasaki. It’s also World Heritage Cultural site, making Japan’s first-ever castle stay a once-in-a-lifetime experience.