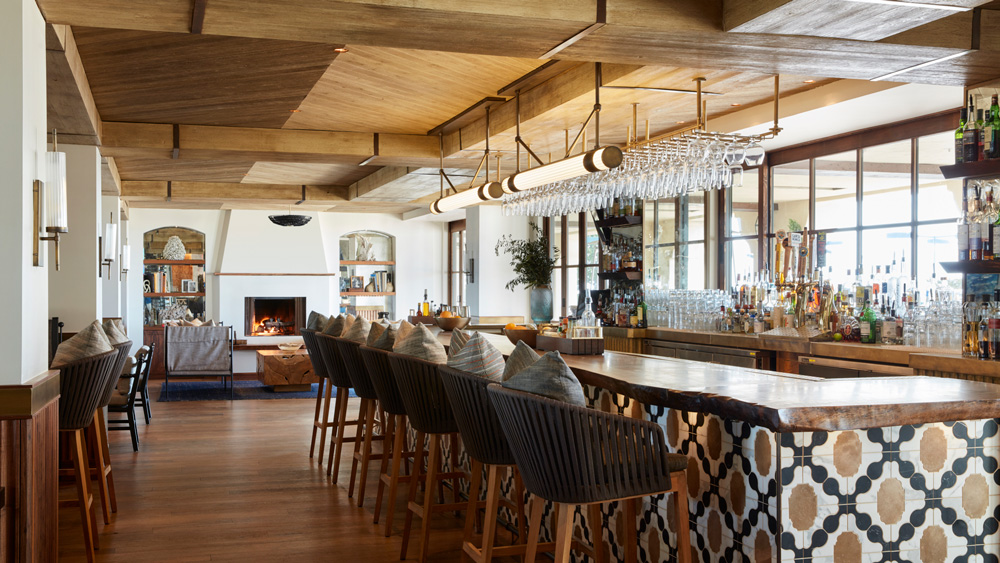 Though it has a storied history as one of Los Angeles’s most revered and elite private clubs, even the Jonathan Club can’t withstand the changing tides of fashion—and over the past few years has loosened its tie, remaking itself to suit a new generation of Angelenos. This revamp has been spearheaded by Studio Collective—the firm behind the hip revamp of downtown L.A.’s Hotel Figueroa and the ever-popular Bungalow at Santa Monica’s Fairmont Miramar—which gave the club’s 13-story downtown flagship Town Club a stylish, airy makeover in 2013. Now, the club’s Santa Monica beach property has just debuted a refreshed restaurant, bar, and lounge that highlights its beachfront location with Spanish-influenced details, lush interior and exterior greenery, and a dining room with unobstructed views of the ocean just outside.

Founded in 1895, the members-only Jonathan Club added the Beach Club facility in 1927 to provide its members—which have included L.A. luminaries like Ronald Reagan and Gaylord Wilshire—with an oceanfront destination to dine and relax by the shore. Amenities at the Beach Club include three acres of private beach, an indoor pool, an outdoor kid’s pool, a full-service spa, five paddle tennis courts, and a gym. Popular social events for members include the California Clambake, Hula Hog Luau, and Father-Son Camp-Overs.

The Beach Club—though less formal than the Town Club, even after Studio Collective’s modern, unstuffy makeover of the downtown property’s dining room and rooftop bar—still features a dress code that bars shorts from the dining room and “bare midriffs” anywhere indoors. Studio Collective founding principle Adam Goldstein explains how the firm expertly blended these long-held traditions with a laid-back beach attitude, saying “we wanted to provide a warm and inviting environment for the members’ home away from home.”

To achieve this goal, Goldstein, along with co-founders Christian Schulz and Leslie Kale, worked to completely overhaul the restaurant, bar, and lounge. Inspired by a picturesque, ocean-side Spanish villa, they added contemporary materials like matte brass accents, wire brushed white oak floors, and a milled walnut bar to give the club a modern update. And they weren’t afraid to change the floorplan either—relocating the primary entrance to be closer to the ocean and reorienting the bar so members can catch those famous L.A. sunsets while mingling over cocktails.

The new design also features a grand entrance to the main dining room, which is marked by passing through two custom blackened steel doors. The vaulted, 18-foot-high pitched ceiling is accentuated by three pairs of wood-framed, sliding glass doors that provide sweeping ocean views. The open kitchen is separated from the dining room by a white oak and brushed brass bookshelf topped by a wood planter overflowing with greenery. Spanish-influenced details include a wood beam ceiling and hand-scraped, wide-plank wood floors. This space also features Goldstein’s favorite detail: A scalloped wainscot that was milled from solid walnut. “I think it is one of those details that both gives the Club a contemporary look, but also has a warm and hand-crafted feel to it,” he explains.

The new private dining room also features a dramatic flair, with book-matched marble slabs, custom upholstered leather wall panels, and parquet wood flooring, while the outdoor dining terrace now has lush landscaping including newly planted olive trees and a custom living green wall. A sculptural fireplace is the focal point at one end of the terrace, while the Pacific Ocean takes the spotlight at the other end, ensuring that the beachfront setting remains front and center, even with the luxe new look.