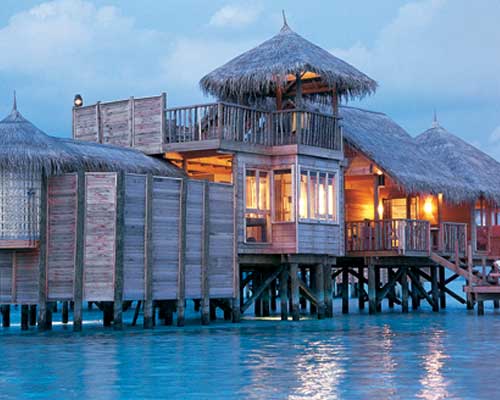 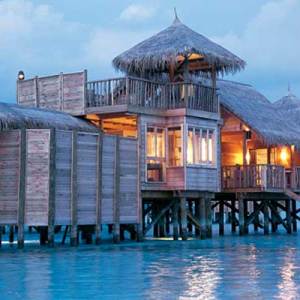 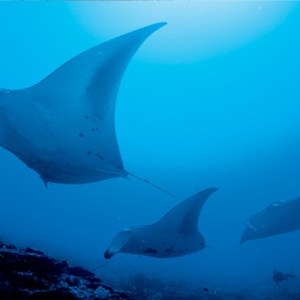 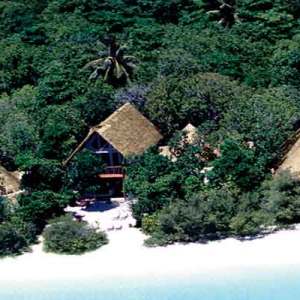 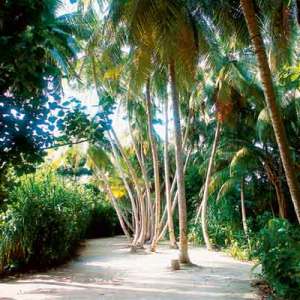 “Those aren’t our pilots, are they?” murmurs a passenger waiting for his flight in the private lounge at the Maldives’ Hulule airport. His traveling companions join him at the observation window, where they view two young men—wearing shorts and no shoes—stowing the last of the luggage in the seaplane docked below. Those are indeed the pilots, and when the 45-minute trip from one atoll to another is complete, the same passenger declares, “That’s the best flight I’ve ever had.” It is a dazzler; myriad coral islands dot the sea, which unfolds in a spectrum of blue and green gem colors: sapphire, aquamarine, turquoise, and jade. Equally entertaining are the pilots, a jocular pair who remain barefoot and not only invite passengers up front for a view from the cockpit but also volunteer to take photos of anyone who hands over a camera.

The coral atolls that form the Maldives—the low-lying island group in the Indian Ocean, just above the equator—host endless varieties of marine life as well as dozens of resorts. Of the 1,190 islands, only about 200 are inhabited, and an additional 90 or so are resort islands, most of which offer scuba diving and the usual water amusements. But the companion properties of Soneva Gili and Soneva Fushi offer a deeper Maldivian immersion, allowing you to live over the water at Gili and in the jungle at Fushi and travel by seaplane between the two. At both destinations, the barefoot dress code applies; upon arrival guests are encouraged to deposit their shoes in drawstring bags, to remain there for the duration of the vacation.

When it opened in 2002, Soneva Gili was the first resort in the Maldives built entirely over water, and that singular feature permeates any visit. Most of the capacious, thatched villas are situated along jetties, but some stand farther out in the lagoon and are reached by boat. One of these is the sprawling new presidential suite—11,000 square feet spread over five buildings and including its own spa, two boats, and two private butlers. The rustic-looking exteriors belie the spare elegance within, where uncluttered, open-air spaces contain appurtenances far beyond the necessary, such as his-and-her ablution areas in the bath, multiple private sundecks, and compendiums of room service choices that range from pillows and room scents to in-villa spa treatments and outdoor excursions. The villas’ floors have glass inserts, so if you look down at your feet at night you may see stingrays feeding in the illuminated crystalline water. The same concept is carried through in the spa, where visitors can enjoy a rubdown while watching colorful fish swim beneath the glass floor under the massage table.

Heat and color, the recurring themes here, prevail gastronomically as well. Even in this equatorial climate where every day is sunny, humid, and in the 90s—not the optimum conditions for working up an appetite—it is difficult to resist the urge to eat everything in sight when the comestibles are so artfully prepared. Familiar Mediterranean dishes such as vegetable pastas and garlicky grilled meats are a comfortable starting point, but the curious will want to explore the pan-Asian potpourri. A spicy Thai omelet for breakfast leads to a lunch of delicate sushi or a stir-fry in the garden, then to dinner choices from all over, such as Indian and Sri Lankan curries, the lighter Vietnamese clay pot meals, fresh Maldivian tuna, or Thai barbecue.

Once you have decompressed (and here it takes perhaps five minutes to do so), even the jetty can amuse. If you have discarded your shoes in the castaway spirit, you will appreciate the convenience of the villa’s bicycle when observing people hotfooting it along the scorching planks, dashing between the urns of water placed at intervals for ladling out a splash of relief.

Complacent coexistence with the lagoon would normally be enough for a tropical vacation, but it would be a shame to miss Soneva Fushi, which occupies a larger, lusher jungle island in another atoll. While Fushi may not claim the over-water distinction of Gili, it puts to good use its larger island setting. Each villa’s front door opens onto a jungle trail, and out back is a private beach with palm trees and a hammock. Bicycles come in handy again, to traverse the island trails that lead from the villas to the dive school, spa, and restaurants.

Resorts the world over offer many of the same diversions, but few, if any, can present the Robinson Crusoe scenario better than Fushi. This is evidenced by its execution of that tropical standby, the private desert island picnic. The plan is simple: Swim, eat, maybe doze. Your butler drops off your party at said deserted isle with a boatload of provisions, including a cell phone should you require anything else. A prior visit to the dive school serves swimmers well here, for they can now spend hours snorkeling along the reef independently, observing behavior patterns of the varied marine life that Fushi’s instructors have pointed out. And no matter how often or where you may have enjoyed this hypnotic pastime, once you swim through the cut in the lagoon, your eyes still widen behind the mask at that moment when you reach the outer edge of the reef. Here you are struck with the vision of millions of fish schooling along the coral, which abruptly drops off into the dark abyss.

Later, although the luncheon menu has been selected the night before, the contents of the hampers still elicit gasps of surprise when basket after basket is opened, revealing lobster medallions with guacamole, picture-

perfect spring rolls, salads composed of greens and herbs freshly picked from Fushi’s garden, a cheese terrine, fresh figs, and cold wine, just for starters. Next, more snorkeling? Or a nap? It is time to phone and request another couple of hours.

Tourists in the Maldives, for the most part, are sequestered on the private resort islands, the government’s way of limiting any negative influences on the locals, whose Muslim faith prohibits the consumption of alcohol.

However, for guests wanting to stray from the resort grounds, Fushi offers a trip to the neighboring, nonresort island of Malhos, with a population of 500. Boatbuilders at one end of the island construct large, graceful dhonis, the traditional vessels that still figure predominantly in the fishing industry, the country’s second-largest source of revenue. In another part of the village, visitors will find a small living museum where villagers demonstrate tasks—such as making curry paste and weaving—that the islanders customarily performed before the last part of the 20th century, when tourism became the primary industry.

Maldives habitués have traditionally come from other parts of Asia and from Europe. The Soneva resorts’ European founders, Sonu and Eva Shivdasani (thus the amalgamation: Soneva), have made their home here and have taken a further measure to set their islands apart. They have co-opted their own time zone, one hour ahead of the rest of the Maldives, to prolong each day at Gili and Fushi with an extra hour of sunlight. As enjoyable as the nights here can be, though, that extra hour never seems to be enough.