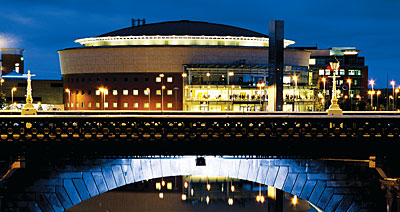 A leaden sky portends cold rain as old-fashioned London cabs—Belfast’s Black Taxis—sit parked along the Peace Wall with their motors running. Billy Scott, the self-styled “breakaway red commando,” stands out from his peers in his shiny oxblood-colored hack. A short, pale, dark-haired man with a quick sardonic smile, Scott surveys the razor wire along the top of the 20-foot barricade. “They built these walls starting in the seventies to keep the Catholic and Protestant neighborhoods of West Belfast from each other’s throats,” he says, before reaching in his pocket and producing a fistful of permanent black pens. “Here, make your mark.”

Opened in 1997, Waterfront Hall was the first tangible sign that Belfast was leaving the Troubles behind.

The barricade is covered with feel-good messages about peace and humanity. This symbol of Northern Ireland’s bitter strife has become the longest strip of graffiti in Europe, the Celtic version of Jerusalem’s Wailing Wall. Indeed, the Peace Wall and other symbols of the Troubles—the internecine violence that kept visitors away from Belfast for decades—have become tourist attractions.

Like most Belfast natives, Scott, a Protestant, carries his own baggage from the Troubles. His father was “a publican, turf accountant [bookie], and small-time smuggler,” and the family pub was bombed twice, once during World War II by Germans targeting the Harland and Wolff shipyard, and again in the mid-1970s by the Irish Republican Army (IRA).

As he maneuvers his cab into the working class neighborhoods outside the city center, Scott points out what he describes as the cycle of life: a hospital, church, school, court, and jail. Political murals of gun-toting paramilitaries in balaclavas loom on walls. “Propaganda,” Scott brands them. The government has begun replacing the most provocative images with more “positive” displays. Former Manchester United star George Best, who drank himself to death following a liver transplant, beams down as a model for local youth, who kick soccer balls on sprawling green pitches where paramilitaries used to train.

“When I was a kid,” says Scott, “we had the four o’clock riot every day, when we all got out of school. Now a lot of people are becoming apolitical, especially as employment is growing. They have too much to lose.”

The Irish like nothing better than a good story, and the resurrection of Belfast is one of their best. Not long ago, most visitors to Northern Ireland’s capital were journalists covering the bombings, assassinations, and political maneuvering that were part of the region’s three-decade-long civil strife. But in 1998, the Good Friday peace accord created new optimism that a power-sharing government of Unionists (pro–United Kingdom Protestants) and Nationalists (pro–Republic of Ireland Catholics) might restore home rule and put an end to the Troubles.

The roots of the Troubles can be traced to 1920, when Ireland split into a largely Catholic south (now the Republic of Ireland) and the Protestant-majority Northern Ireland, which consisted of six Irish counties that elected to remain in the United Kingdom as an autonomous province. The north always had a strong Catholic minority, and a push for Catholic civil rights in 1968 escalated into armed conflict, with the IRA on one side, Protestant paramilitary groups on the other, and the largely Protestant police force caught in between. Self-government in Northern Ireland was one of the early casualties, as power reverted to London.Today, as the political process creeps forward (at press time, a newly elected Northern Ireland Assembly was scheduled to be sworn in on March 26), the paramilitaries have put away their guns and the people of Belfast have turned their attention toward making money. The city that travelers once shunned out of fear for their lives is now a peaceful boomtown of 300,000 that draws 6 million visitors a year. Belfast remains a work in progress, but it has not enjoyed this much prosperity since its two-century-long linen-weaving and shipbuilding heyday that ended after World War II. In the last decade alone, more than $2 billion in public and private investment has been pumped into the city, including $18 million for the new Merchant Hotel.

In the lounge off the Great Hall, tufted and fringed bordello-red slipper chairs surround small round tables. Serious drinkers, however, claim one of the red leather stools at the bar where Sean Muldoon presides. “I love to hear American accents among the Dubliners on weekend holiday and the Brits who come on business,” he says as he dribbles golden uisce beatha over a golf ball–size sphere that gives new meaning to the term lowball.

“Whiskey drinkers don’t like to give up their ice,” he explains. “This way it melts slow and you can top it off all night.” As a peat fire sizzles in the hearth, Muldoon rhapsodizes about his cache of rare Irish whiskeys, including an ambrosial Old Comber. The legendary County Down distillery closed in 1953, but a few bottles remain. Muldoon offers the spirit at $150 a shot.

The Merchant is located in a district recently branded as the Cathedral Quarter, where artists are converting old warehouses into studios and galleries. In a small shop on Exchange Place, Pop sculptor Anto Brennan offers political commentary in the form of chess sets. His most popular set features IRA paramilitaries and Royal Ulster Constabulary as pawns, and caricatures of politicians as the major pieces. Brennan, resembling a welterweight-in-training in his blue hooded sweatshirt, calls it the Northern Ireland Piece Process. “It always ends in stalemate,” he scoffs, echoing the common frustration that the political leaders are posturing, and that they lag the popular sentiment for peace. “The irony is that we Irish don’t even play chess.”

At McHugh’s, a pub that has been part of this dockside warren’s social life since 1711, a foot-tall edition of Brennan’s Piece Process sits under glass. Nearby, at one of the neighborhood’s many other watering holes—this one named for Belfast poet and pacifist John Hewitt—locals gather for Celtic music and craic, an Irish term for conversation and entertainment that translates loosely as “a good buzz.”

The barman at John Hewitt alternates between painfully slow pulls of Guinness, the bar’s most popular pint, and quicker drafts of Hilden, a sturdy ale from Ireland’s oldest independent brewery. Conversation inevitably turns to the scandalous cost of real estate: Belfast home prices have been rising by one-third each year since 2003. “It’s all that Dublin money coming in,” growls a patron on his fourth Harp. The musicians drift into the bar, one by one displacing the customers at a small table near the window. The bodhran (Irish drum) player, fiddler, and Irish piper spend 20 minutes rolling and smoking cigarettes before their guitarist finally arrives. While tuning their instruments, they sound like a funeral of cats, but then—with a twirl of the stick and bang of the drum—they launch into a fast-paced hornpipe. The house is full until last call, when everyone spills onto the rain-slicked sidewalk to catch a cab.

Although the Europa’s Piano Bar offers a more refined setting for live music, the hotel itself is synonymous with Belfast’s chaotic past. The IRA bombed the bustling property on Great Victoria Street roughly 70 times between 1971 and the last blast of 1993. Now the hotel stands with the Peace Wall as one of Belfast’s shrines to the Troubles.

Front office manager Carolyn Stalker recalls a 1991 blast as if it were last week. “It was 7:30 in the morning,” she says, warming to the tale. “We saw a lorry parked in front of the Opera House next door with its doors open and motor running.” She and her crew evacuated more than 120 guests in 20 minutes. “Ten minutes later the bomb exploded. We hadn’t a window, front or back.”

When the Hastings Hotels group rebuilt the Europa in 1994, the company clad the edifice with tall columns and a defiant glass facade, as if to say, “Enough.” Downtown Belfast has been experiencing a renaissance ever since.

Michael Deane established his eponymous restaurant a long block from City Hall in 1997, when Central Belfast was just starting to stay open after dark. “People from Dublin used to be frightened to come up,” says Deane, whose establishment holds Northern Ireland’s only Michelin star. “They saw us as Comanches.”

Nowadays, Deane’s casual downstairs brasserie is packed every night, while he himself cooks in the formal restaurant upstairs. The chef peers periodically through a cutout from the kitchen to check on his customers and their perfectly composed plates of foie gras and lobster with artichoke salad, or rump of Irish veal with parsnip-sage risotto. A trysting couple—she from Leeds, he from Dublin—snuggle on a settee in the lounge, where they smoke between the nine courses of Deane’s tasting menu. “Belfast is the new Dublin,” she gushes, giddy with Champagne. “On the weekend it’s the place for a good night out without the hen parties and stag parties.”

Downtown’s Victoria Square shopping center, crowned by a 115-foot-diameter glass dome, represents another wager on continued peace in a city where glaziers grew wealthy during the Troubles. The $640 million facility, currently the largest commercial development in Europe, is scheduled to open in 2008. But as Belfast redefines itself as a post-conflict city, it also is reclaiming symbols from its halcyon days. To cap the successful cleanup of the riverfront, several million dollars went into renovating the 1867 Albert Memorial Clock Tower, which retained its signature four-foot lean. Samson and Goliath, the yellow gantry cranes looming on the Belfast skyline, were designated as historic monuments.

The cranes mark the once-industrial acres where the River Lagan meets the channels of Belfast Lough. Rusting iron, crumbling brick, and weed-filled dry docks cover the grounds where 35,000 workers at the Harland and Wolff shipyards built 60 vessels a year during World War II, before the yard shrank to a repair facility. Envisioning new glory days for the waterfront, the city has christened the district as the Titanic Quarter, after the doomed ocean liner that was built there.

The reinvention of the Titanic Quarter area began in earnest in 2000, with the opening of the Odyssey entertainment complex. The complex’s arena put Belfast on the schedule for rock tours and spectacles, and today it serves as home ice for the Belfast Giants hockey team—the sport of burly men fighting with sticks seems a perfect fit for Northern Ireland. Costing $192 million, the Odyssey was the first phase of a $2.5 billion plan for hotels, apartments, and marinas. Most prominent on the drawing boards is the Titanic museum, which is due to open in 2011 for the centenary of the launch of the “unsinkable” luxury liner.

Celebrating an icon of engineering hubris may seem ironic to the rest of the world, but Belfast residents disagree. “Well, she was freakin’ well unsinkable when she left here, mate,” says taxi driver Billy Scott, expressing local sentiment. “But she had an English captain.”