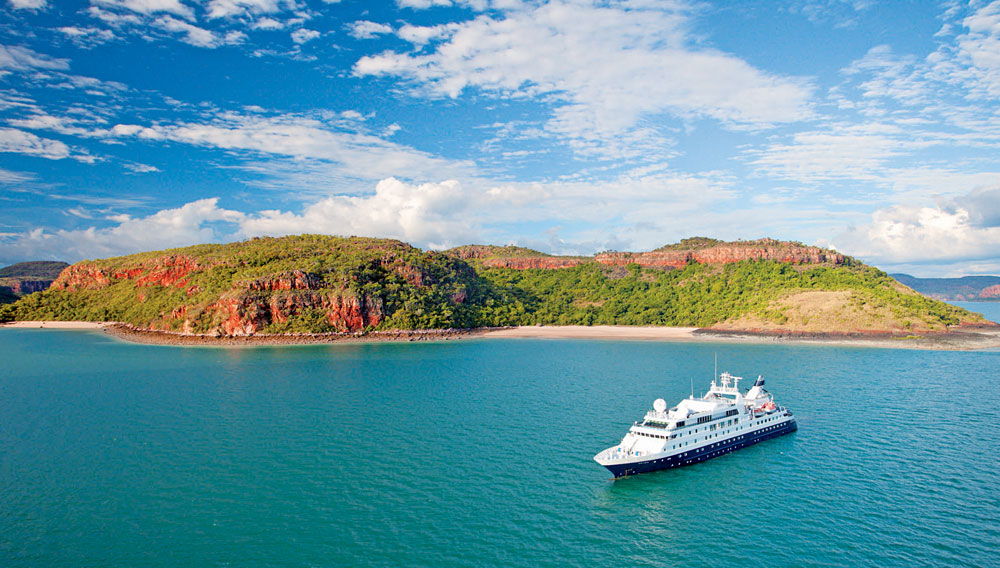 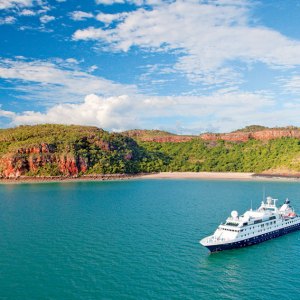 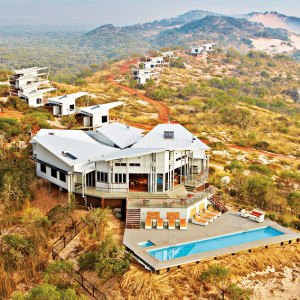 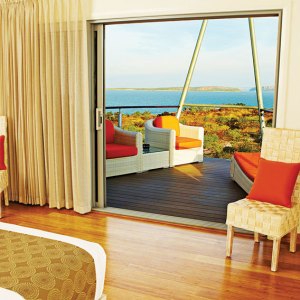 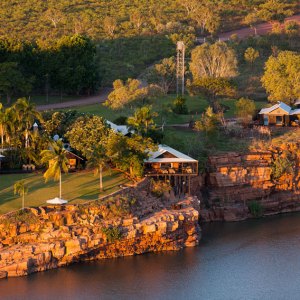 It was a gorgeous night for a deck party, the sea all purple and smooth. A languid breeze purled over the stern of the MV Orion as the 338-foot luxury liner steamed through the Timor Sea. Just off the starboard rails, the wildest coast in all of Australia slipped by silently in the dark.

“Are we ready to have some fun?” Orion’s bubbly singer cooed under the spotlight of a lemon moon. The festivities then commenced with a lively rendition of “Da Doo Ron Ron,” the dance floor soon vanishing under a blur of whirling Top-Siders and bejeweled ballerina flats.

To be sure, Orion is a wonderful place to party. The $100 million ship from the Sydney-based Orion Expedition Cruises is a spectacle of brass, marble, and German steel, with 53 staterooms, a cushy lounge, and ample decks for alfresco celebrations. But I cannot dance, so I simply bobbed my head and marveled at the moment. For more fascinating than the bon-vivant vibe rattling the teak was the fact that such merrymaking had ever passed this way at all.

As far from Sydney as we could be in Australia, my fellow Orion passengers and I were shadowing the shores of the Kimberley in the country’s coastal northwest. Stretching inland and up from the pearling town of Broome in the west to Darwin in the north, the Kimberley (always with the the) is an immense plateau of staggering extremes. It is nearly the size of California but less populated than Urbandale, Iowa. Ocher sandstone formations—which predate the dinosaurs by a billion years—heave into the sky and then plummet into flaming-red rock gorges cooled by waterfalls. Wallabies bound under the missile-lock gaze of wedge-tailed eagles, while whales patrol the “humpback highway” just offshore. The silence is so complete that it weighs on your ears, and the remoteness can either exhilarate or terrify—depending on your ability to navigate the expanse.

Traditionally, most people who visited this desolate region in Western Australia were indeed left to their own devices, often dragging pop-up campers for months down a dusty dirt thoroughfare that avoids the coast by hundreds of miles. Jouncing along this, the Gibb River Road, would put you deep in the Outback, where at the end of the day an aluminum roof and a Jayco toilet were as grand as could be found. The region’s complete lack of conveniences, however, only added to the Kim­berley’s mystique. “Even Australians consider themselves lucky to come here,” says Justin Friend, the program director for Orion Expedition Cruises.

But I had not traveled 42 hours from my home in rural Oregon to go camping. I had come to explore this Australian frontier because it is now easier to do so, both by land and by sea. While Orion Expedition Cruises has offered its 10-night trips along the Kimberley’s coast since 2005, the recent debuts of a handful of luxury lodges in the region have brought high-end, land-based adventure to some of the loneliest wilderness on Earth.

A 45-minute helicopter flight from the beat-down boondocks of Kunu­nurra now brings guests to the castaway world of the Berkeley River Lodge, a beachside villa complex that opened atop sweeping dunes last April. In May, El Questro Homestead—a Federalist-style ranch set amid a private 1 million–acre reserve of eucalypt wilderness, about 70 miles outside Kununurra—unveiled three cliffside bungalows overlooking the Chamber­lain Gorge. And on the far eastern fringes of the Kimberley, about an hour’s drive southeast of Darwin, the Northern Territory’s Wildman Wilder­ness Lodge opened in 2011 after being trucked in on 18 massive “road trains” (tractor-trailer-trailer-trailers) from Queensland to Mary River, Australia’s newest national park.

“America has always had luxury in the wild with your lodges in the national parks, but this is all still fairly new for Australia,” says Jason Yule, Wildman’s general manager. “Australians are catching up, but in our own way.”

I timed my three-week trip to the Kimberley to avoid the November-to-April wet season, when the mercury explodes to about 115 despotic degrees accompanied by thunderheads of bloodsucking midges and torrential rain that literally rips the gutters from buildings. The dry season, it turns out, is not without its drawbacks, most notably the pindan dust that kicks up from the parched earth. Any apparent relief from the heat has to be weighed seriously in the Kimberley, where I encountered countless coves of calm, creamy water—in which no one could swim.

“Sharks might bite you because they mistake you for food,” Greg Fenn, a ranger at El Questro, told me. “But the saltwater crocs? They want to eat you.”

And yet, as Orion made its way from Broome to Darwin last August, I could not claim much kinship with the early white explorers who struggled for survival in these parts. In the Kimberley, which is named for a 19th-century British colonial minister, Phillip Parker King and other surveyors of the era found an inhospitable land where they scavenged for freshwater and dodged man-eating crocodiles and Aboriginal spears. I, on the other hand, opened my stateroom doors every morning, glided onto my French balcony, and wondered what highlight would unfold next.

In my days cruising the Kimberley’s coast, I rode Zodiac rafts into twinkling bays, contemplated ancient rock art, and spied on jabirus. A pod of porpoises played off to port and I swam in tidal pools (no crocs!) while Orion’s saxophonist played jazz from shore. On the morning before the deck party, I went fishing and hooked a golden grouper so feisty that reeling it in left me bruised and gasping. It was delicious.

After disembarking Orion in Darwin, I took the nearly two-hour commute by hired car to Wildman Wilderness Lodge in Mary River National Park. What the outpost lacks in curb appeal—a line of cottages surrounded by barren, dusty grounds along a little-used airstrip—it makes up for in creature comforts, service, and access. Guests arriving by helicopter get a better sense of the greater property’s gorgeous setting, in the midst of a vast floodplain. Just beyond the airstrip, views encompass an otherworldly sculpture garden of termite and ant mounds the size of Orcish fortresses. Farther out, the wetland shimmers with ibises and crane-like brolgas.

I flew an hour from Darwin to Kununurra, and at El Questro heard the susurrus of Livistona palms at a Jurassic hot spring reserved exclusively for guests. At the Berkeley River Lodge (accessed exclusively by charter flight), I strolled alone down a strip of sand known simply as Our Beach.

On my last evening at Berkeley River, I drew a warm bath in my outdoor tub and gazed in naked awe at the virginity of the place around me. The sea grew pale in the waning light, the dunes as pink as diamonds. Outside the resort, the closest man-made intrusion was easily a 30-minute flight away.

For a moment, one of the most pristine areas of the planet seemed to let down its expulsive guard, size me up, and approve of this strange, privileged suitor gawking at it so. Wild dogs bayed in the distance as I sank into the steamy water, awash in a rhythm I could move to after all.

Once the exclusive domain of intrepid campers, the Kimberley region has become more accessible in recent years thanks to a handful of small cruises and wilderness hotels. To get the most of a trip to the Kimberley, combine a cruise with stays at one or more of the area’s remarkably remote retreats.

Orion Expedition Cruises runs 10-night journeys through the Kimberley from April to September on its 338-foot luxury liner Orion. The trips sail between Broome and Darwin, with brief stopovers in East Timor. The best of Orion’s 53 staterooms come with marble bathrooms, balconies, and small sitting areas, and a host of inviting decks and other public spaces encourage guests to congregate. Still, the highlights of any cruise to the Kimberley are unquestionably off ship. Passengers board Zodiac rafts each day to explore lonely bays and gorges and to access hiking trails leading to sacred Aboriginal rock-art sites. Optional activities include scenic flights over the Bungle Bungles—a remote mountain range of bizarre, beehive-like formations—and speedboat rides through rapids. (From $8,710 per person, all-inclusive minus some activities and alcohol) 877.674.6687, www.orionexpeditions.com

A 45-minute helicopter flight northwest of Kununurra, the Berkeley River Lodge opened in April on a remote beach. The striking property consists of 20 iron-and-steel villas strategically arranged on sand dunes to capture both the ocean breezes and the views. Guests can heli-fish, cruise through the Berkeley Gorge, hike to Aboriginal rock-art sites, and observe and help document nesting sea turtles. (From about $4,575 per person for a three-night package, all-inclusive including round-trip air transfers from Kununurra) +61.8.9169.1330, www.berkeleyriver.com.au

In May the 21-year-old El Questro Homestead—set on the Chamberlain River in a million-acre private wilderness reserve outside Kununurra—added three cliffside private bungalows, bringing the total number of rooms at the resort to nine. Guests can fish, soak in hot springs, and take river cruises down portions of the 80-mile-long river, through one of the Kimberley’s largest gorges. (From about $1,688 per room, all-inclusive minus some activities) +61.3.9426.7550, www.elquestro.com.au

Located about 100 miles southeast of Darwin, the 2-year-old Wildman Wilderness Lodge best serves as a simple place to relax before or after a Kimberley cruise that begins or ends in the northern port city. Ten modernist, black wood “habitats” and 15 Kenyan-style safari tents sit along an airstrip near a billabong in Mary River, Australia’s newest national park. (From about $289 per person, including breakfast and dinner) +61.8.8978.8955, www.wildmanwildernesslodge.com.au