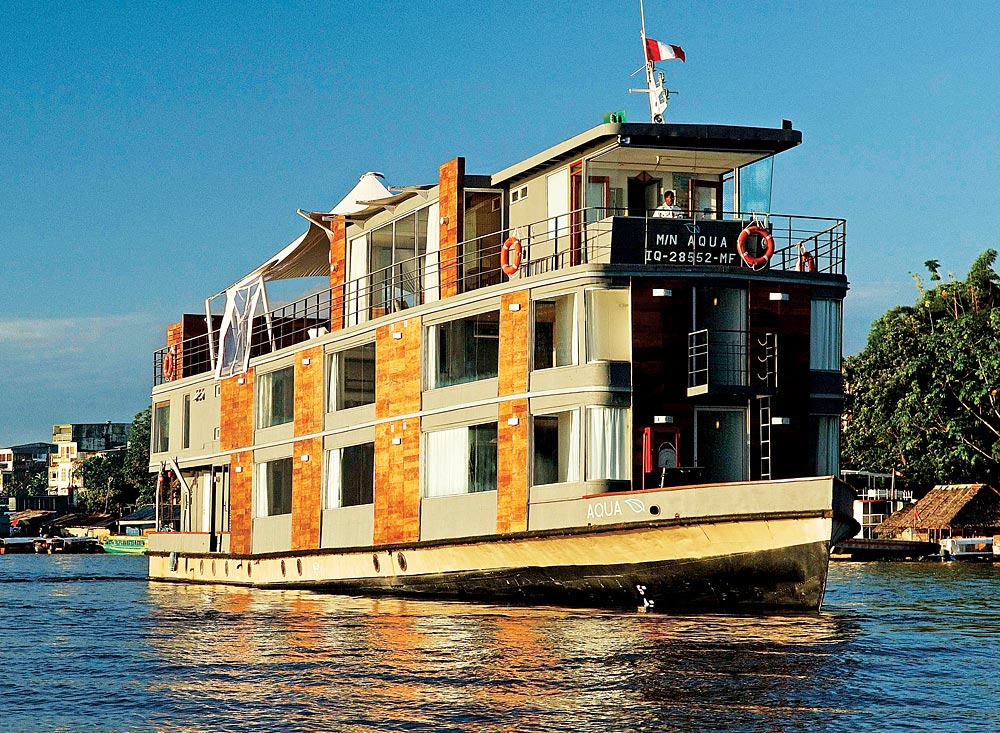 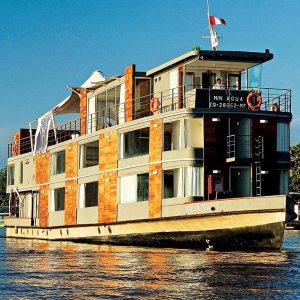 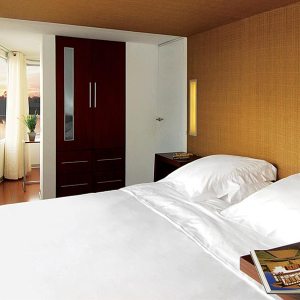 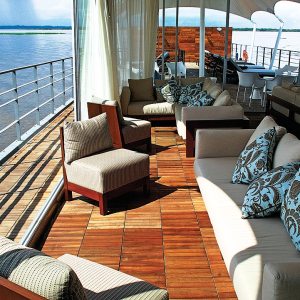 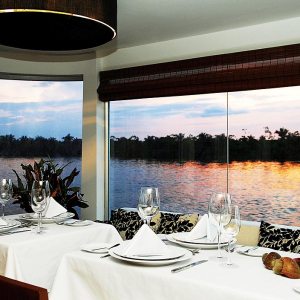 The turquoise flashes of a blue morpho’s wings appear like a beacon as the butterfly darts and weaves in front of our skiff on the narrow, black-water Yanallpa River in northeastern Peru. Microscopic scales on the top of the insect’s wings, which can span as much as 8 inches, reflect an iridescent blue light, while a dull brown underside protects the bug from predators and creates a mesmerizing blinking effect as it flutters. Among the largest butterflies in the world, the blue morpho lives only about a month, and it spends most of that time eating and reproducing, says Daniel Vásquez, senior naturalist guide for Aqua, a 12-suite river-expedition vessel that launched in this remote section of the Amazon River system early this year. For the 46-year-old Vásquez, who was introduced to the wonders of this rain forest by his grandmother, the brilliant bug offers evidence of a higher power. “When you are watching wildlife,” he says, “you think of God.”

Vásquez and his team, which includes his younger brother, Usiel, combine a passion for wildlife with an eye for it. The guides have a knack for spotting three-toed sloths, exotic birds, and a variety of monkeys that are camouflaged in the trees along the shores of the Amazon and its tributaries. On Vásquez’s signal, the skiff’s driver pulls up to a bank where we greet a large, black monk saki monkey, which peers and grunts at us from a branch like a grumpy old man cursing at trespassers. Amid a cacophony of birdcalls, pairs of red-and-green macaws fly overhead.

The wildlife that inhabit Peru’s Pacaya Samiria National Reserve, which covers roughly 5 million acres (more than twice the size of Yellowstone National Park) at the headwaters of the Amazon basin, rarely encounter Homo sapiens. The park logs only about 2,500 visitors annually, and the native population numbers about 30,000 people. The reserve, 80 percent of which is underwater during the rainy season, offers a glimpse of an environment that remains virtually unexplored, with the recent exception of the 130-foot-long Aqua’s cruises. “It reminds me of the Okavango Delta in Botswana,” says Francesco Galli Zugaro, Aqua Expeditions’ CEO and a former vice president of sales and marketing for Ocean Adventures, a cruise operator in the Galápagos Islands. “This is a mixture of my experience in the Galápagos and a water-based safari.”

The pace of an Aqua Expeditions cruise is similar to that of an African safari camp, with skiff excursions replacing game drives at the start and end of each day, when animals are most active and visible. During the heat of midday, you can enjoy a leisurely lunch—fish, grilled meats, and salads from a menu created by Lima chef Pedro Miguel Schiaffino—in the boat’s glass-walled dining room. After lunch, there is little more to do than take a siesta or watch the verdant shores and rustic villages glide by from the observation deck or through the enormous picture window of your cabin. Without phone or Internet service, you have no choice but to disconnect from the rest of the world and simply go with the flow of the mighty river, which is both a life source and a highway for the native peoples.

The strikingly modern, multilevel Aqua arrives in villages like an alien spaceship, docking next to wooden dugout canoes and open boats laden with bananas. Aqua’s three-, four-, and seven-night itineraries include visits to various settlements, where villagers, often with their arms folded across their chests, gather in groups, cautiously assessing the watercraft and its curious explorer occupants.

The residents of Nueva Tarma, a town of a few hundred (estimated by counting the huts and multiplying the number by eight), have never heard of the United States. We break the ice first with the children, who sing a song in Spanish; we return the favor with a few choruses of “You Are My Sunshine.” Village elders demonstrate how they weave roofs from palm fronds, as the kids giggle at images of themselves and their friends on our digital cameras. After we present gifts of T-shirts, pens, candy, and toys, the children play a quick game of soccer with a few of the passengers. Then we shove off on our skiffs, enriched by the exchange and admittedly much more appreciative of Aqua’s climate-controlled comforts.

Rather than build from scratch or refurbish an existing vessel, Galli Zugaro acquired an old, empty hull as the foundation for Aqua, which he designed based on feedback from comment cards he collected over the five years he worked in the Galápagos. “I took that information and built a vessel, an itinerary, and an experience that delivers on every level,” says the 34-year-old native of Rome, who attended Boston College and now lives in Lima with his wife and three children. “Details are important—like not having cabins on top of the engine room, and having big picture windows with beds positioned higher so you can see the view.”

By purchasing an existing hull, Galli Zugaro shaved months off the construction phase, completing Aqua in well under a year. “I got a master’s in naval engineering in about six months,” he jokes about his crash course in shipbuilding, during which he worked with the Sima shipyard in Aqua’s base of Iquitos, the farthest-inland port in the world. Established during the rubber boom in the 19th century, this city of 500,000 is inaccessible by road, so all equipment and materials to construct Aqua had to be brought in by plane or boat. “It was quite a feat, getting U.S. Coast Guard–approved flushable marine toilets that can receive toilet paper into Peru,” he says, “as well as convincing the shipbuilder why I required such state-of-the-art marine technologies.”

Jordi Puig, a Peruvian designer, selected local slate and woods as materials for the boat’s facade, public spaces, and 12 suites, which measure 230 or 240 square feet. The understated design relies on the natural scenery to provide a backdrop of colors and textures through the boat’s wide expanses of glass. “Finally, people can experience the Amazon with all the comforts they expect,” says Galli Zugaro. “Our clients want adventure from 9 to 5. Then they want to come back to blasting A/C and a powerful, hot shower.”

That shower is heaven-sent after we encounter a blizzard of mosquitoes during an evening excursion on the Dorado River. The Amazon’s savage reputation is most evident in the pitch black of night, prompting reflection about earlier explorers who lacked such essentials as flashlights and bug repellent. But the nocturnal forays allow visitors the chance to observe a range of species, including giant spiders, green frogs, and koala-like kinkajous. On our Dorado excursion, Vásquez and his team illuminate the water and shoreline, searching for red-eyed reflections of caimans. We locate a baby caiman, which we take turns holding before returning it to the river.

The less adventurous among us are relieved to spot Aqua’s bright lights in the distance, knowing that a chilled, bug-free cabin, a tart Pisco sour, and a hot meal are within sight. Vásquez, however, is unfazed. “My job is like a therapy,” he says. “People usually ask me if this is monotonous, but nature is always changing.” Indeed, before nightfall that evening on the Dorado, under threatening skies, the Amazon’s coffee-and-cream-colored waters turn silver, with waves that roll slowly away from the stern like mercury. At the inlet’s mouth, rare pink river dolphins gather to feed, teasing us with their vexingly quick split-second surfacings that consistently evade our attempts to photograph them. Local legend holds that these dolphins transform late at night into fair-skinned, blond-haired people who venture into town—wearing hats to cover their blowholes—looking for villagers to kidnap. The story may partially explain the cautious dispositions of the natives.

As we continue up the Dorado, a light rain begins to fall. We spot weird and wonderful sloths, agile capuchin monkeys, horned screamers, and innumerable other species of birds, reptiles, and mammals. Thunder rumbles ominously in the distance, but rather than unleash a deluge, the clouds soon part to reveal the setting sun. A miraculous double rainbow spans across the black waterway, reaffirming our faith in the awesome power of nature.