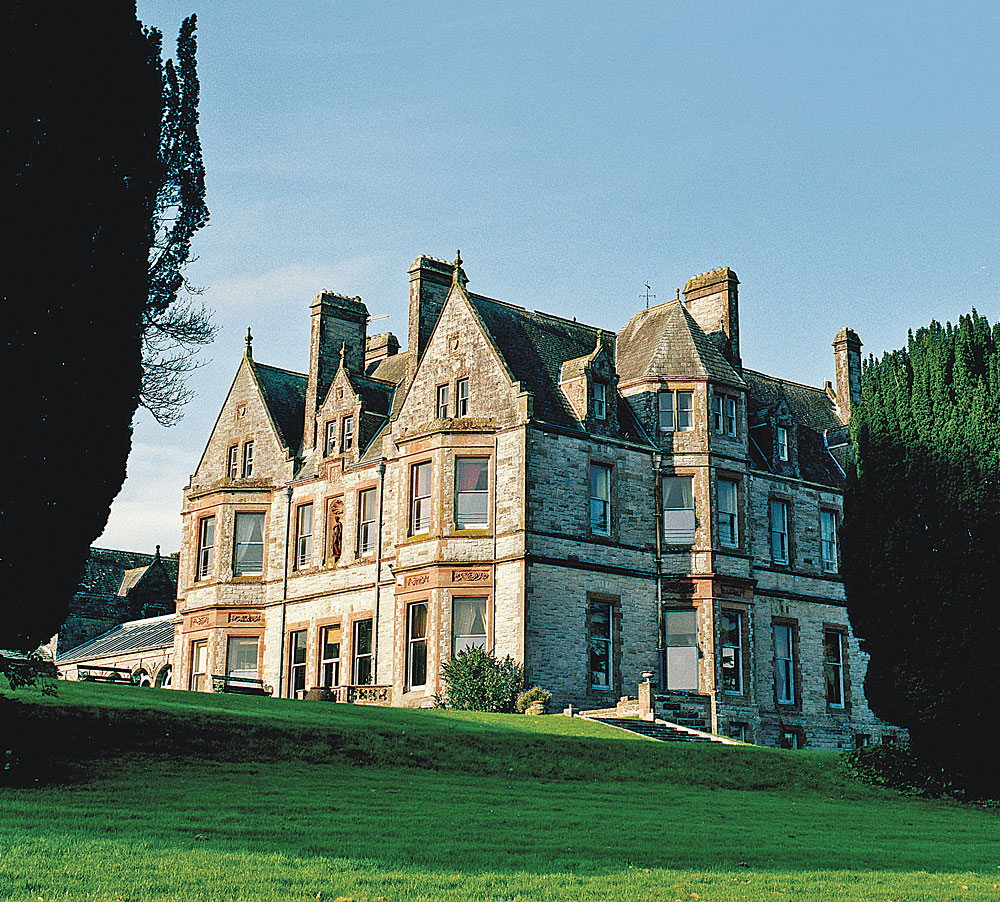 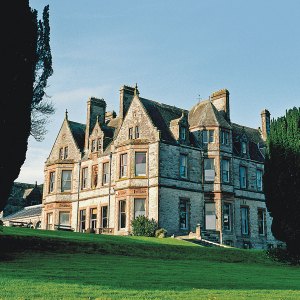 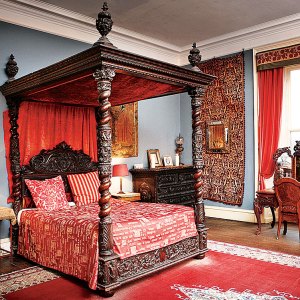 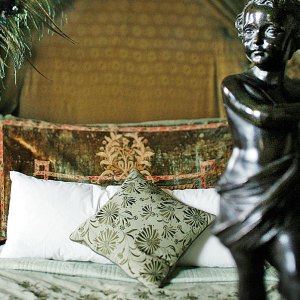 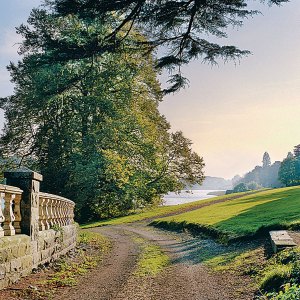 Sir John Leslie, the fourth of his line to hold the title of Baronet at Castle Leslie, is telling me about Jonathan Swift. Although Leslie is one of the few living Irish survivors of the Spanish flu (born in 1916, he says he remembers having a temperature of 106 degrees at the age of 3), he has, mercifully, made no claim of knowing the 18th-century Irish satirist personally. “He wrote a short poem during a weekend visit to the castle,” the baronet says of Swift, a friend of Leslie’s ancestors. ” ‘Here I am in Castle Leslie / Rows of books upon the shelves / Written by the Leslies / All about themselves.’ ”

Leslie smiles as he hands me a handsome green volume titled Never a Dull Moment, his highly entertaining memoir. “And as you can see,” he says, “we have not stopped yet.”

On the book’s cover is a watercolor of Glaslough (“green” in Gaelic) Lake, which is visible through the dining room windows. The baronet completed the painting while being held as a prisoner in a Nazi camp outside Salzburg, Austria, during World War II. Captured in spring 1940 during the British retreat at Dunkirk, France, he remained a prisoner until 1945, when the U.S. Third Army liberated him and his fellow soldiers.

Leslie family members have enjoyed this view of Glaslough Lake since the Fighting Bishop, also named John Leslie, defeated the forces of Oliver Cromwell at the Battle of Raphoe and bought this 1,000-acre estate in what is now Glaslough, Ireland, in 1665. The Leslies trace their lineage to Hungary and, astonishingly, Attila the Hun. But a member of the Scottish branch, Bartholomew, is responsible for the motto that adorns the family crest. In the 11th century, he saved the Scottish Queen Margaret from enemies by fording a river on horseback, with the queen riding pillion. As the queen struggled to hold on to the mount, Leslie threw her his belt and told her to “grip fast.”

True to their motto, the Leslies have held tightly to family traditions, foremost among them entertaining guests. Swift was a regular visitor; he often stopped at Castle Leslie on his way to his estate in nearby Armagh, where he penned Gulliver’s Travels. William Butler Yeats may not have written any poems about Castle Leslie, but he often slept in the estate’s Red Room. The Duke of Wellington, a cousin of the Leslies, spent time here before and after defeating Napoléon at Waterloo, and the Pre-Raphaelite painters John Ruskin and Dante Gabriel Rossetti were frequent houseguests of the first baronet in the late 19th century.

This tradition of entertaining has continued in recent decades, as the Leslies opened a hotel on the property in the 1970s and even began renting rooms in the castle for overnight stays. But the pastime took a new twist last October, with the debut of the Club at Castle Leslie. “A lot of people would like to live in a castle,” says Samantha Leslie, John’s niece and a steward (with her five siblings) of the Castle Leslie trust. “This is their chance.”

In 1991, at age 24, Samantha returned to her Irish homeland after graduating from a Swiss hotel school. Parts of the castle had, by that time, fallen into disrepair, due to both the family’s and Ireland’s financial straits. The estate’s westernmost wall (built during the great famine of the 1840s to provide work for the peasants and not, as rumored at the time, to keep the Leslies in) functions as a dead end for the main street of the village of Glaslough in Monaghan, one of three Republic of Ireland counties situated in the northern province of Ulster. Glaslough’s location, just 70 minutes southwest of Belfast by car—the eastern end of the Leslie estate borders the Northern Ireland county of Armagh—discouraged tourism during the height of the Troubles in the 1960s and ’70s. At one point, 96 of 114 border crossings between the countries were closed.

Monaghan’s isolation does have its benefits. The region’s sparsely populated terrain of long, rolling drumlins sprinkled with kettle ponds evokes an older Ireland—a feeling that is often missing at international hotels and resorts in the country’s more developed areas.

The Leslies’ hotel, which Samantha’s father, Norman, opened along with an equestrian center, was sold because of onerous property taxes and the poor economic climate in the 1970s. But shortly after returning to Castle Leslie in the early ’90s, Samantha opened a tearoom, and soon she was serving dinners on Friday and Saturday nights. She also began conducting ghost tours of the castle, which is purported to be one of the most haunted in Ireland.

Uncle John moved into Castle Leslie in 1994, after spending 30 years in Italy. Eight years later, the property gained worldwide notoriety when it hosted Paul McCartney and Heather Mills’ wedding. (At Leslie, they describe that marriage with the same phrase their countrymen once applied to the Irish-built Titanic: “She was all right when she left here.”) In 2004, Samantha repurchased the equestrian center and the 30-room Hunting Lodge hotel, which has since undergone a $15 million renovation. She also added 12 four- and five-bedroom cottages, a Victorian-style spa, and a cooking school to the family estate.

Armed with a cocktail, Samantha leads a tour of Castle Leslie’s drawing room. “It’s the first of its kind in Ireland,” she says of the Club at Castle Leslie, gesturing at the walls lined with photos of family and friends. “It is very much for individuals, for people who are comfortable in their own skin, for like-minded people. That’s why we let people visit once before they join, so they can make the right decision. They all will be sharing this house.”

Samantha’s concept involves selling annual memberships ($4,430) to people who can then stay at Castle Leslie anytime for a nightly fee (currently $435). The per-night fee includes meals and drinks, and members also gain access to private Leslie outposts such as London’s Groucho Club, the Badia di San Sebastiano di Altari (thought to be Europe’s oldest surviving monastery) south of Rome, and a five-room villa in the south of France.

At Castle Leslie, at least, shared areas are off-limits to electronic communication devices, and there are no phones, radios, or televisions in the bedrooms. Even clocks are hard to find. When asked about the lack of contact with the outside world, Samantha dismisses it with a wave of her hand. “This is a house that was built to entertain.”

The house in question is a 100-room limestone manor built in 1870 in the Scottish Baronial style. (A Norman tower existed on the site in the 13th century.) Among the entertaining venues that Samantha has refurbished is the castle’s Green Room. With its massive 500-year-old Italian marble fireplace and original Victorian wallpaper, the room is a perfect spot for sipping a brandy while browsing the side tables displaying the war medals that Leslies have earned over the centuries.

The first Sir John Leslie, who built the present house, was a Pre-Raphaelite painter of some note, and his Long Gallery, which runs nearly the length of the building, was “based on Michelangelo’s loggia in the Medici chapel in Florence,” says Samantha. “Those are his impressions of Michelangelo’s frescoes on the walls.”

The castle’s 20 bedrooms, many of which are named for members of the Leslie family, offer their own diversions, including possible ghost sightings. The Red Room, which features panoramic views of the lake and formal gardens, has, according to Leslie legend, been visited by an ancestor who died in the fields of France during World War I. Norman’s Room, named for the same young soldier, is the source of tales of ghosts and levitating beds. On the castle’s fifth floor, the Eagle’s Nest provides solitude in a bedroom where John Leslie kept owls as a child. Today, you can hear the birds’ descendants addressing the moon from the room’s terrace.

Members of the Club at Castle Leslie can dine privately in a candlelit room with views of Glaslough Lake, or join fellow members at a 40-seat table lit by Italian-glass candelabra in the formal dining room. Head chef Noel McMeel, a native of County Antrim, applies a wide range of experience to his menus, including time in the States working with such culinary luminaries as Alice Waters at Chez Panisse in Berkeley, Calif., and Jean-Louis Palladin at Washington’s Watergate Hotel. “Cook it very little, and in the simplest of ways,” says McMeel, who imparts this philosophy at Castle Leslie’s cooking school, which sits in a modern annex at one end of the building.

Many of Castle Leslie’s attractions lie outside of the house, in the rolling Irish countryside. The estate’s equestrian center offers riding programs for all ability levels, 21 miles of bridleways, 300 new cross-country jumps, and a mile-long, all-weather gallop. Fishermen can enjoy summer evenings on Glaslough Lake, where, in 1991, an Irish record for pike was established with the catch of a 38-pound, 9-ounce specimen.

Even nonanglers will want to visit Glaslough Lake as the sun goes down. The Glaslough region is famous for its rooks, which inhabit the village during the day but spend nights in the forests of ash, sycamore, and yew trees beyond the lake. The clamor of rooks (rather than caw, as crows do, the birds make a clicking sound as they fly) reaches its height at sunset, as 20,000 birds flock over the lake in an ever-expanding and contracting gyre. The scene recalls the painting on the cover of Sir John Leslie’s book, as well as the circumstances under which it was painted. Castle Leslie is indeed a sanctuary for those who are able to return.

Keys to the Castle

One way to secure a membership in the Club at Castle Leslie is by purchasing one of the village cottages or houses offered by Castle Leslie Real Estate (+353.47.88100, www.castleleslieproperties.com). Your membership remains valid for as long as you own the house. The prices range from about $467,000 for an 850-square-foot cottage (one with a lake view remains unsold) to about $920,000 for a four-bedroom house on the village square.

The real estate venture is a further indication of Samantha Leslie’s determination to return the castle to its former glory and keep it on a solid financial footing. “All proceeds from the sale of houses are put back into the castle and estate,” explains Leslie, who shares stewardship of the Castle Leslie trust with her five siblings. The development, which sits on the grounds of the estate, links the castle with the town of Glaslough and with its past. An earlier village, named Tullyree, burned to the ground in the 1850s and was never rebuilt. The rows of new houses were constructed on the land that Tullyree once occupied. They surround a village green and a traditional Irish square, where crushed-stone footpaths lead walkers through stands of oak and yew trees.

The development extends the village of Glaslough onto the castle grounds, reconnecting, in both a geographical and cultural sense, the bond that the fire broke. The houses, which are built of limestone and brick and have slate roofs, were designed to blend in with Glaslough’s existing structures. “We are taking advantage of the property boom in Ireland,” says Leslie, “but we have to remain sensitive to the estate’s historic style.”