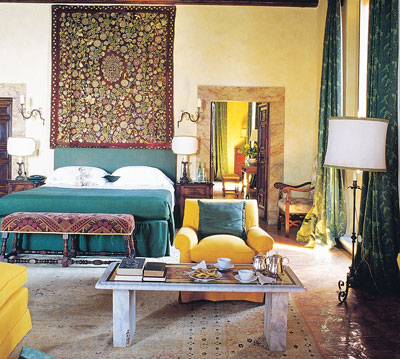 Standing largely as he left it more than 30 years ago, J. Paul Getty’s former home in Italy confirms that, though good taste does not necessarily accompany wealth, the oil baron possessed an abundance of both. Assisted by Italian art historian and critic Federico Zeri (who later became a trustee of the Getty Museum in Malibu, Calif.), Getty spent years collecting rare art and antiques to appoint his restored 17th-century villa, located about 25 miles northwest of Rome and bordered by the Tyrrhenian Sea on one side and nearly 15 acres of parklike grounds on the other. The assemblage of museum-quality artworks–exquisite tapestries, furniture, paintings, Roman objets d’art, and Persian rugs–remains in place at the villa, which now is known as La Posta Vecchia, a secluded 19-room Relais & Chateaux hotel.

The management at La Posta Vecchia has added a few new benches to the terrace and, in a small space off the enclosed swimming pool, a modest beauty center offering spa treatments. Otherwise, the property appears much as it did when Getty resided–infrequently–at what he called his “serene and heavenly home.” The estate’s stewards regard the home itself as a masterpiece, one that requires care, attention, and, above all, preservation.

“The only thing that has changed since I was here two years ago is that two chairs have been re-covered,” says Laguna Beach, Calif., interior designer Robert Ricker, “and quite appropriately, I might add.” Ricker and his traveling companions often have spent a night or two at La Posta Vecchia on their way to and from summer sojourns in Positano and Capri. The hotel’s proximity to Rome’s Fiumicino airport makes it ideal for such visits.

A self-described purist, Ricker praises the authenticity of the place and its treasures. “There are incredibly rare antiques and 19th-century Persian rugs all here to be lived with as they were intended, not behind glass or on exhibit,” he explains. “Hotels have gotten so modernist, so minimalist–they all look the same. This feels like a home.”

A residential ambience is the essence of the property: La Posta Vecchia has no gift shop, no fitness center, no business center, and no lobby, just a simple desk in a stately entrance hall that opens to a terrace overlooking the sea. You can stay in Getty’s personal quarters, a 500-square-foot suite with a massive 17th-century armoire and a Carrara marble bathroom. Families now gather in the oceanfront Medici suite, which was once reserved for Getty’s mistresses, who no doubt enjoyed the gigantic pink marble bathtub that is flanked by two curved staircases.

Italian businessman Roberto Scio purchased the villa and all of its contents–artworks, antiquities, and pink marble bathtub–from the Getty estate in 1980. Ten years later, he converted the residence into a hotel and named it La Posta Vecchia (the Old Post House), a reference to the building’s original role as a hostelry, which it had been centuries before Getty moved in.

The building lay abandoned for more than 40 years when Getty purchased it in 1960 from Prince Ladislao Odescalchi, whose family had owned the land on which it stood for at least six centuries. The prince’s ancestors constructed the building in 1640 as a hostel for the visitors and tradesmen who journeyed to Palo Castle, the family’s neighboring 15th-century home. Although Getty, who was 68 when he bought the property, filled the villa with beautiful objects and art, he spent little time there because he was afraid of being kidnapped. (For those rare occasions when he did stay at the villa, he rebuilt the wall that prevented access to the property from the sea.)

His fears proved to be more than paranoia when, in 1973, members of Italian leftist terrorist group the Red Brigades kidnapped his eldest grandson, Jean Paul Getty III, in Rome. When Getty resisted paying the $17 million ransom, the kidnappers severed the teenager’s ear and sent it to an Italian newspaper. Getty then dispatched more than $2 million to secure the boy’s release. The incident is believed to have contributed to his decision in 1975 to vacate the estate permanently.

Getty had been the latest in a long line of powerful men to build on the shores near what is now the town of Ladispoli. As early as 2 B.C., the breezes off the Tyrrhenian Sea drew affluent Romans seeking relief from the searing summer heat of the city. In fact, La Posta Vecchia and Palo Castle were built where the Roman port town of Alsium once stood, and during the restoration of Getty’s home, a project that lasted five years, workers uncovered the remains of two ancient Roman villas and a treasure trove of antiquities. The find, considered an important archaeological discovery, has quashed the notion of constructing an outdoor swimming pool or tennis courts on the property.

Getty, who reportedly at one point believed that he was the reincarnation of the Roman emperor Hadrian (in power from the years 117 to 138), embraced his home’s history. He created a museum in the basement to display restored mosaics and an array of artifacts found on the site: amphorae, oil lamps, tools, and personal adornments. The collection remains intact, and the museum is open for La Posta Vecchia’s guests to explore.

Visits to the museum are among the hotel’s myriad activities, which range from private guided tours of Rome (including visits to the Sistine Chapel and the Vatican Museums with a former member of the Swiss Guard) to cooking classes with executive chef Michele Gioia. His résumé lists stints with La Posta Vecchia’s sister property, Il Pellicano, in Porto Ercole and with La Terrazza at Rome’s Hotel Eden. You also can learn about gardening (as much as half of the hotel’s produce is grown on site), receive a Shiatsu massage while lying on a rubber mattress in the warm water just off the black sandy beach, and arrange for a private dinner in the Roman museum or a garden gazebo.

When Barbara Panzera, who manages the hotel, arrived at La Posta Vecchia in 2002 (after working at Il Pellicano and later for Rotana Hotels in Dubai), she found the then—austerely formal service incongruous with its surroundings: a house by the sea where people came to relax. The bright and engaging 31-year-old Sicilian native therefore recruited a new, younger staff, who, she says, “love what they do and believe in this property.” Panzera dispensed with the formal uniforms to facilitate more casual interactions between guests and staff. “There is a gap between the formality of the house and the service, which is the opposite,” she explains. “We try to make people happy, not just because of the room features or the service, but by stimulating emotions–to render the stay a memorable one because something has touched your heart.”

Fears for his safety may have prevented Getty from finding happiness here, but few guests will not be moved by the picturesque setting, the works of art, and the remarkable history of the home that he created.