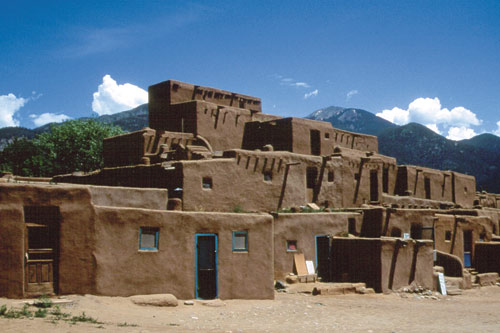 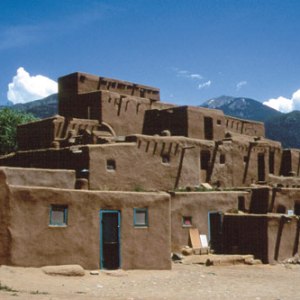 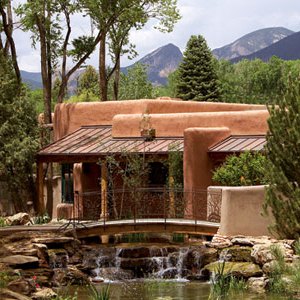 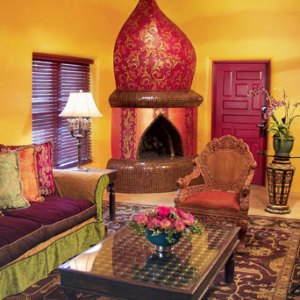 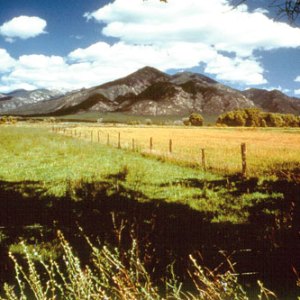 The Pinzgauer 710 transport vehicle plods its way stubbornly over clumps of broam grass and foxtail on the western slope of the Sangre de Cristo mountain range. Olaf Mingo is behind the wheel of the German-engineered, Austrian-made, and Swiss-operated military jeep, a Cold War remnant now serving a more peaceful purpose at the Latir Mountain Ranch outside of Taos, N.M. From a steel bench seat in back, I survey the property’s considerable splendor—high-desert meadows marked by a smattering of human structures and rising to more than 12,000 feet above the plateau—while Olaf steers the relic toward its intended target: Latir’s prized herd of bull yaks.

Latir Mountain Ranch is home to the third-largest yak herd in the United States. The heavy, hook-horned oxen, natives of Tibet, are well suited to the lofty elevations of the New Mexican highlands, and Olaf, son to a Norwegian mother from Wisconsin and a Basque father from Nova Scotia, tends to the herd of more than 100 head in the shadow of the Sangre de Cristos. Olaf and his fellow “yaqueros” welcome occasional visitors to the ranch, piling them into one of two Pinzgauers and leading them to the upper reaches of the 6,800-acre spread—home to elk, black bears, and giant aspen groves—or offering an impromptu tour through the grazing herds of black-haired bovines in the lower valley.

The yak herd, the ranch, and a significant portion of the nearby community of Taos are among the extensive holdings of entrepreneur and environmentalist Thomas Worrell, whose most ambitious venture to date, El Monte Sagrado resort, opened this summer in the heart of town. A sprawling assortment of adobe casitas, natural ponds teeming with koi and rainbow trout, and intricately landscaped gardens (both outdoors and in), El Monte Sagrado is the first high-end retreat in the somewhat secluded Taos Valley. The project aims to introduce Taos’ uncommon offerings—like tracking yaks from the back of a Swiss army jeep with a guy named Olaf—to travelers who, heretofore, have left this New Mexican mountain town off of their itineraries. “My friends ask me, ‘Why would you build this in a place that you can’t get to?’” Worrell says over a bowl of yak chili at the resort’s De la Tierra restaurant. “Well, that’s the point.”

Yet for the former newspaper magnate, El Monte Sagrado serves another, perhaps more pressing, point. The resort is part of Worrell’s master plan to preserve the earth’s environment through responsible development and sustainable water technologies. He wants the $50 million project to serve as a living brochure for alternative building materials, water-recycling systems, and other eco-friendly products that his companies have developed over the years. First, however, he will have to convince people to spend $1,000 a night for a hotel room in Taos.

Taos is by no means undiscovered. The town and nearby Taos Ski Valley have long been favored destinations for artists and outdoorsmen. But the region’s lack of exceptional accommodations has kept it off the map for many travelers, who spend their time and money in Taos’ more sophisticated neighbor to the south, Santa Fe, and the fashionable Colorado Rocky resorts to the north. Taos’ combination of natural beauty and cultural charm, however, provides a sufficient platform on which to develop a premier destination.

The drive northeast from Santa Fe offers a startling first glimpse of Taos—set on a plain rising to the Sangre de Cristos on one side and descending on the other to the Rio Grande Gorge. The rugged terrain presents ample outdoor opportunities, but it is Taos’ indigenous heritage and thriving arts community that set it apart from its mountain-town brethren.

Native Americans first arrived in the Taos Valley about 900 A.D. By 1000, they had established a permanent community of adobe homes, where their descendants still live today. The Taos Pueblo is now designated as both a World Heritage Site and a National Historic Landmark, and its residents’ influence can be seen in everything from Taos’ ubiquitous adobe structures to the native weavings, pottery, and silver-and-turquoise jewelry adorning storefronts throughout town.

Taos’ influx of nonnative artists began in 1898, when painters Bert Phillips and Ernest Blumenschein stopped in town to fix a broken wagon wheel. So entranced were they by the community that they decided to stay, eventually founding the Taos Society of Artists in 1912. In subsequent years, Taos served as a second home to several prominent figures—among them Georgia O’Keeffe, Ansel Adams, and D.H. Lawrence—and today, the town of fewer than 5,000 residents boasts more than 80 galleries and hundreds of established and aspiring artists.

Thomas Worrell first came to Taos in the mid-1990s to throw a surprise birthday party for his wife, Odette. Less than a decade later, his local interests include everything from a yak ranch and luxury resort to entertainment venues and a cooking school.

A native of Tennessee, Worrell does not fit the stereotype of an environmental activist. He rides Harleys, wears cowboy boots, and admits to feeling like “a one-legged man in an ass-kicking contest” with a marked Southern drawl. But since selling off his newspaper empire (at one point he owned more than 100 papers throughout the States), Worrell has been on a mission to save what is left of planet Earth.

Worrell’s Dharma Holdings Ltd. is the parent company to several environmentally concerned offspring. His ventures develop and market a range of eco-friendly products, each of which is on display at El Monte Sagrado: Curoxin, a chlorine substitute, keeps the pool clean; an elaborate rainwater-collection network feeds the resort’s natural streams and ponds; adobe walls are built with a nontoxic concrete alternative; a pond-filtration system keeps things cool in the spa; and a Living Machine, the centerpiece of Dharma’s environmental suite, utilizes an indoor garden of tropical plants, fish, snails, and other natural organisms to convert the resort’s raw sewage into potable water.

El Monte Sagrado is set in an ancient riverbed on Taos’ Kit Carson Road, known as the cottonwood highway for its many stands of towering white-bark trees. The grounds’ abundant green space, waterways, and traditional adobe architecture are well matched to their surroundings and, equally important to Worrell, respectful of Taos’ indigenous heritage. “If we built El Monte Sagrado any other way, it would be like taking seashells to the mountains,” he explains. “It would be phony. And Taos is, above all else, not phony.”

Each of El Monte Sagrado’s 38 adobe-style units explores a unique culture or motif—from a Marrakech-themed suite to a two-bedroom Texas casita. The Kama Sutra accommodation, which Worrell describes as “the first honeymoon suite to come with instructions,” features a private entrance to a natural swimming pond and suggestively carved furniture recovered from an ancient Indian dig site.

The El Monte Sagrado experience also includes a first-class restaurant, spiritually minded spa, and other requisite trappings of an exclusive retreat. But the resort is at its best when it strays from the norm: Guests can swim with koi in a natural pond, children can fish for rainbow trout in the meandering streams, and visitors can admire an original Picasso hanging from the boardroom wall. The El Monte Sagrado staff will arrange everything from classes at Worrell’s cooking school to sweat-lodge ceremonies with local healers, and if all goes according to plan, patrons will soon have the option of an overnight trip to a tepee camp at the top of Latir Mountain Ranch.

Following my day trip to Latir, I head out the next morning into the Carson National Forest with another curious creature, the llama. Our guide is a former New York City chef who fled to Taos in the early ’90s and now leads llama treks into the surrounding wilderness. The graceful, docile animals make fine companions as we trample up the Colum-bine Creek Trail, sampling wild raspberries and currants under the shelter of the subalpine forest. We settle on the banks of the creek for a gourmet lunch (carried by the llamas and prepared by the former chef), while the animals snack on wildflowers and take a siesta in a nearby meadow.

Three hours later, I lie on a table at the Detlev spa, smothered with smooth basalt rocks. The trickle of the pond-filtration cooling system provides a constant, soothing complement to the hypnotic pressure of the hot-stone massage, but my end-of-journey treatment, and El Monte Sagrado’s more-than-serviceable spa, will not be the impetus for my return.

El Monte Sagrado, with its nonchlorine pools and sustainable sewage systems, will inevitably attract those in search of environmental progress. But the resort’s strength lies in its passion for its surroundings. It delivers a stylish, elegant, and indulgent travel experience while staying true to the spirit of Taos. And in the end, it is Taos that is the attraction. Llamas, yaks, and sweat-lodge ceremonies are not for everyone. But those who find interest in the obscure will embrace Taos as a destination and, ultimately, determine the fate of El Monte Sagrado resort.

El Monte Sagrado (505.758.3502, www.elmontesagrado.com) is the first resort of its kind in the Taos Valley. Its 38 one- and two-bedroom units, each designed to a unique cultural theme, range in price from $295 to $1,700 per night. The resort also operates 12 casitas located in the center of town. The restored adobe homes accommodate as many as six guests, who have access to all of the resort’s amenities.

Taos locals claim that their county has more massage therapists per capita than any other in the country. True or false, the claim portends the robust menu of services at Detlev, El Monte Sagrado’s 2,500-square-foot rejuvenation center. Treatments include everything from traditional massages and facials to shirodhara (a warm-oil process) and life-reading and elemental-healing massages. Detlev accommodates no more than six guests at a time.

Taos Pueblo: A World Heritage Site, a National Historic Landmark, and home to the Taos Indians for more than 1,000 years, the pueblo is a must on any Taos itinerary. 505.758.1028, www.taospueblo.com

Taos Ski Valley: The best resort in New Mexico—and one of the best in the country. 505.776.2233, www.taosskivalley.com

Doc Martin’s Restaurant:  Located in the historic Taos Inn, this local favorite is known as “the living room of Taos.” 505.758.1977, www.taosinn.com