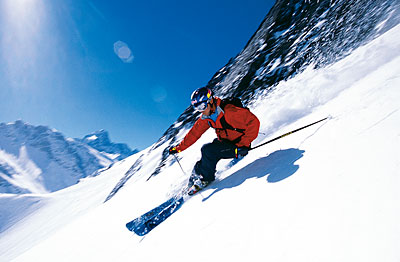 As morning breaks, the blast from an avalanche-control charge serves as reveille. A few minutes pass, and then boom! The second explosion suggests that it has snowed all night. The view from the bedroom is of Lake of the Incas, frozen and surrounded by 19,000-foot peaks. Beneath the window, the chaise longues around the swimming pool are blanketed with snow. It is August in the Andes, and Portillo has fresh powder.

The blasts are reassuring; matters are under control here in the Western Hemisphere’s highest mountains. Early in the morning after a snowfall, the staff sets off explosives, either employing an Avalauncher—a howitzer that has been modified to target the excess snow—or manually placing charges that they detonate remotely. Meanwhile, skiers chafe in the dining room during a leisurely breakfast as they wait for the all-clear signal, indicating that it is safe to clomp out for another perfect day of skiing.

Like summer campers, guests at Chile’s Portillo (pronounced por-TEE-yo) ski resort come for a week or two at a time. They arrive from North and South America, Europe, and even Africa and Australia. They come not only for the summer skiing, but also with goals. Portillo’s ski school attracts instructors from the world’s top winter resorts, and many of the guests voice a common refrain: “I’ve come here, once and for all, to become a better skier.”

Portillo provides that opportunity. There is no town at the base of this mountain to distract skiers, and no slopeside condos. With the exception of the Chilean army troops, who undergo mountain training at Portillo but bunk at their nearby base, the only people skiing are guests of the Hotel Portillo. Because the hotel can accommodate only 450 guests, there are no lift lines—ever.

Besides the Chilean troops—many of whom are struggling to learn to ski while wearing full combat gear, including backpacks—the U.S., Canadian, and Austrian national ski teams are training here this week. Children who wander into the hotel gym late in the afternoon on any given day may find themselves playing stickball or indoor soccer with some of the world’s elite skiers as they unwind at the end of their workdays.

Other Chilean ski resorts, including El Colorado and Valle Nevado, can claim to be more expansive and modern, but none have Portillo’s pedigree. Portillo, which opened in 1949 and is the oldest ski resort in South America, has been operated by members of the Purcell family since 1961; Henry Purcell is the current owner, and his son Miguel, a former Chilean national ski champion, is the general manager. Henry, who, at 72, skis every day, says the World Cup ski circuit was invented in the hotel bar, a clubby, leather-walled gathering place that a set decorator from Desilu Studios designed five decades ago. Portillo was awarded the right to host Latin America’s first and only world ski championship for the year 1966, although the International Ski Federation (FIS) nearly canceled the event after a typhoon blew through in 1965 and avalanches took out all but two of the lifts. The FIS warily relented to pleas from the Purcell family and allowed Portillo its moment in the spotlight, as scheduled. The French, led by Jean-Claude Killy’s two victories, captured all but one of the gold medals that year, but Portillo also was a winner, as skiers around the world took notice of the resort as a summer skiing destination.

Originally, Portillo was accessible only by a narrow-gauge train. Most guests now, however, are greeted at the Santiago airport by the hotel shuttle van driver and chauffeured about 100 miles to the resort. The farms and vineyards of the lower altitudes quickly give way to cactus-covered hillsides, and then suddenly the licorice whip of highway be­comes switchback ribbon candy, creating a bottleneck for the convoy of tractor-trailers heading to Argentina. Sammy, our driver, points out condors flying overhead and other photo ops, including Aconcagua (altitude 22,834 feet), the highest peak in the Americas, as he careens around the curves and past the truck traffic.

The soundtrack on the car stereo intensifies as our altitude increases. The bippity-boppity Chilean tunes that serve as a cheerful cultural introduction in the foothills segue into harder-edged rock music as we climb higher and the trucks slow down to negotiate the switchbacks. The road is three lanes if, as Sammy does, you count the solid yellow line up the middle as a lane. Janis Joplin screams “Come on, come on . . . take it!” as we pass half-a-dozen semis while the headlights of another one emerge from the tunnel a few feet ahead. After several similar encounters, Sammy draws our attention to a chairlift that passes overhead; farther up the road, we see downhillers skiing across the snow-covered avalanche barrier that forms a tunnel over the highway and is part of Portillo’s Juncalillo trail. We have arrived.

Relieved to be alive, most of us from the small group in Sammy’s van spend the first day adjusting to the altitude and exploring the canary yellow edifice, our home for the next week. “We keep the hotel rustic so people will come out of their rooms and socialize,” says Ellen Purcell, Henry’s wife. The tactic works: Groups cluster around card games in the common areas, or pack into the large outdoor hot tub at day’s end, or congregate in the bar or disco. Portillo does have a couple of TVs on the premises that no one watches. As we become acclimated to the altitude, catching our breath as we walk downstairs to find the ski equipment room, we note the presence of the 450 staff members who tend to the 450 guests. Particularly noteworthy is Enrique, the keeper of the ski boots, who each day remembers which boots are ours and everybody else’s without the exchange of a word or receipt.

“Here’s what’s huge about Portillo,” says a powderhound from Park City, Utah, after gathering her boots from Enrique. “It’s noon, and you still have long, untracked powder runs, great runs, that you don’t have to hike far to reach.”

To one who has skied the icy, groomed slopes of northeastern North America since preschool, the knee-deep powder is a hurdle rather than an allure. But my desire to conquer that obstacle makes me one of the goal-oriented guests for the week. My objective even has a name: Va et Vient, a type of lift—found only at Portillo—that brings to mind a slingshot. The two Va et Vients ascend the steep, powdery chutes named Roca Jack and Condor. Henry Purcell says that the lifts, which are based on a pulley system, were invented for the avalanche-prone terrain; if a lift cable is buried or knocked out, a team can simply drop a new one into place from a helicopter.

After three mornings of terrain-specific ski lessons with a Czech in­structor, it is time to face Va et Vient and, more daunting, the powdery descent that will follow. The lift contraption is somewhat like a five-person poma, but the operator shuts it down while the skiers position the disk seats at crotch level. When the mechanism starts up, the sensation is akin to waterskiing at full throttle, except that you are blasting uphill and over moguls while jostling and sharing the tow rope with several other people. With each bump the disk slips lower until it ultimately winds up between my ankles, forcing me to lock my legs together and hold the hand bar in a death grip. When we reach the top (Caramba!), I let go and turn to see that the person who had been next to me is gone. She had fallen off halfway up, and I had not even noticed.

Word has it that if you can make it to the top on Va et Vient, you are a good enough skier to make it down. I therefore possess enough bravado to float down the steep Condor run, making tracks in the pristine snow that in no way resemble those uniform schuss marks photographed for promotional brochures.

At the bottom of Condor, but still at mid-mountain, Tío Bob’s restaurant (altitude 10,500 feet) is the reward for surviving the previous half hour. (However, guests customarily take their four meals per day in the excellent hotel restaurant at the base of the mountain.) Henry Purcell, who is waiting with the crowd inside the hut that houses the cafeteria-style kitchen, recommends the salmon. The fare is limited but choice, with grilled meats and fish, salads, and, of course, Chilean wines. Knowing that the route down the mountain from Tío Bob’s is either the Plateau run, where Killy won a downhill medal, or a long hurtle down an avalanche chute followed by a hike across the frozen lake back to the lifts, I pass on the wine. The sun beats down on the restaurant’s outdoor tables with flashbulb intensity. The panoramic, treeless vista of the Andes is breathtaking, the crowd is in high spirits, and I am not lying buried in powder. Life is good, even if a massive blizzard is predicted two days hence.

After nearly a week at Portillo, guests have become well acquainted, and flurries of gossip—both social and meteorologic in nature—sweep through the groups in the great room. Veterans predict (correctly) that the road to Santiago will close. With regret, several compadres evacuate a day early, to avoid missing their flights home.

The storm indeed arrives, and those who remain at Portillo are stranded for three more days, until the road reopens. The skiers are kept indoors, while avalanches take out some of the ski lifts, including, not surprisingly, one of the Va et Vients. But the guests help shovel out the hot tub and swimming pool, and the management hosts a cocktail party. And when the lifts resume operating, the powder is, once again, plentiful and sublime.