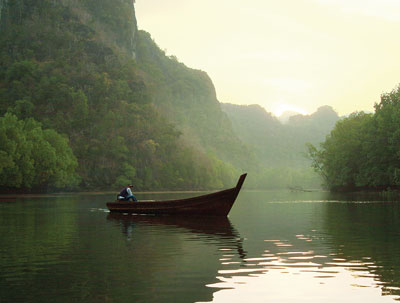 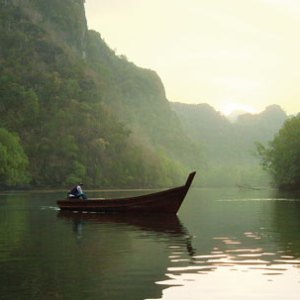 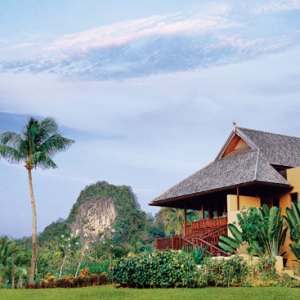 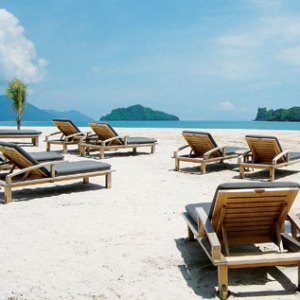 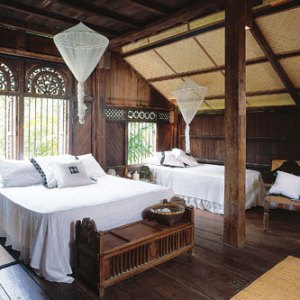 “Allow me to tell you about Langkawi,” requests my driver after he has deduced—perhaps because I have my face pressed against the window of his taxi—that I am a newcomer to his native isles. “We are a land of many legends.”

Outside, a band of women on scooters, their sarongs and head scarves flapping behind them, whizzes past us. As he negotiates the island’s only roundabout and continues down a road lined with palm trees, rice paddies, and brilliantly colored plantation houses, my driver shares one of Langkawi’s oft-told tales: the tragedy of Princess Mahsuri.

Mahsuri, a beautiful (and actual) 19th-century princess, was the object of another woman’s envy. Her jealous rival spread a rumor throughout Langkawi that the princess had compromised her chastity to a roving Siamese minstrel while the prince was away. When Mahsuri’s husband heard of his wife’s purported infidelity, he ordered her put to death. The village chieftain carried out his orders immediately, using the princess’ keris (a Malay dagger) to take her life. According to the tale, white blood gushed from Mahsuri’s veins—a sign of her innocence—and with her last words, the dying princess cursed Langkawi from prosperity for seven generations. Throughout the forthcoming week, I would hear this legend, in myriad variations, from nearly every Malay I met.

Often compared to the Bali of 30 years ago, Langkawi comprises a namesake main island the size of Singapore and 103 surrounding islets scattered throughout the Andaman Sea off the northwest coast of the Malaysian peninsula. Only four of Langkawi’s islands are inhabited, and the chain—despite its sandy beaches, balmy weather, and lush rain forests—attracts only a smattering of tourists. Most who venture to Langkawi do so to explore its rain forests, the rushing Kilim River, and the ecologically rich mangroves, where long-tailed macaques are among the three native monkey species, and where sea eagles, for which these islands are named (lang means “eagle,” and kawi means “red stone”), soar overhead. Although strong evidence suggests that Langkawi was home to a Hindu-Buddhist kingdom that extended from China to Sumatra as early as the first century, the history of these islands remains largely undocumented.

What is known about Langkawi’s history involves famines, droughts, floods, and, in particular, the 1821 Siamese invasion that occurred a few years after Princess Mahsuri’s death. British imperialism displaced the Siamese in 1826 and continued u ntil 1957, by which time the Malay region’s independence movement had matured and organized into an alliance, the Federation of Malaya. After several years of political instability, Malaysia united as an independent nation (which at that point included Singapore) in 1963. Not until 1980, however, when then-prime minister Mahathir Mohamad established an economic policy to transform his country into a tourist destination, did Langkawi begin to realize a modicum of prosperity. Many locals do not consider it happenstance that the commencement of Mohamad’s plan coincided with the birth, in Phuket, Thailand, of Wan Aishah, Princess Mahsuri’s seventh-generation descendant.

At a grand-opening gala for a new Four Seasons resort on the island of Langkawi, former prime minister Mohamad tells the story of Princess Mahsuri to an audience of celebrities, dignitaries, and Southeast Asia’s elite. In 2001, as prime minister, Mohamad invited Mahsuri’s seventh-generation offspring to live on Langkawi as an official guest of the state. Unfortunately, the girl, who was 15 at the time, could speak neither the native Malay tongue nor English (which is spoken commonly in Malaysia), and she struggled with the reverential treatment she received throughout the islands. Aishah soon returned to Thailand, but her departure seems to have done little to dampen the renewed spirit of the Langkawi people.

Immediately following Mohamad’s rendition of the Mahsuri legend at the Four Seasons event, the tale is told again through Thai dance and a melodramatic opera. The evening’s festivities conclude with a symbolic lifting of the princess’ curse—represented by break-dancing construction workers and live Cuban music—to reveal a new Langkawi (and a momentarily stunned audience) with an elaborate fireworks presentation.

Such displays are a major departure for this otherwise quiet island. Typically, nightlife on Langkawi leans toward more genteel pursuits, such as a sunset sail on the Andaman Sea, cocktails on the veranda, and dinner at eight. A night out on the town might mean making a trip to the evening market or taking over a patio table at a local restaurant. Langkawi locals are colorful people, in dress as well as character, but with the majority of residents practicing the country’s central religion, Islam, the island has remained free of big discos and rowdy bars.

Still, says Mohamad, life on Langkawi has changed dramatically in recent decades. “There was nothing on this island in 1955,” he recalls. Then, as a young government intern living on Langkawi, Mohamad was one of fewer than 2,000 residents on the island, most of whom were farmers or fishermen. Even a decade ago, claims Mohamad, water buffalo outnumbered people on Langkawi. Today, the island’s population stands at approximately 70,000, but Langkawi remains predominantly rural, with more than two-thirds of its land covered in vegetation, including 20,000 acres of mangrove forest.

“Development on the island has been quite slow,” says Narelle McMurtrie, a spike-haired Australian expatriate who owns the Bon Ton Restaurant & Resort on Langkawi. “But the availability of food and wine has increased enormously.” Ironically, McMurtrie’s three-acre resort offers one of the more authentic Malay experiences on the island. Built on an old coconut plantation and surrounded by mountains and wetlands, the resort includes seven guesthouses, some of which date to the 1800s. The restored timber structures, which are among Langkawi’s oldest, were built in the tradition of tropical Asia: on stilts, with the floors raised several feet above the ground to allow for ventilation and to avoid floodwaters and wild animals.

On the other end of the island (and spectrum), the new Four Seasons Resort Langkawi consists of two-story pavilions and bungalow villas designed in the manner of a Malay village, or kampong, spread throughout 48 acres of rain forest and secluded beach. A labyrinth of arches and air wells leads from the resort’s entrance to a spacious courtyard with a reflecting pool, one of the property’s many intimate spaces—including abundant gardens—that are ideal for quiet reflection, conversation, or, as is often the case on Langkawi, storytelling.

As my driver promised, Langkawi is a land of legends, but even more so it is a land of storytellers. At the night market, on the beach, and in the cafés, island folklore—stories of magical albino crocodiles, fairies, and babies born to infertile couples—weaves its way into conversation. Most common, of course, is the tale of Princess Mahsuri. And on my final morning on Langkawi, after the bellboy loads my bags into his buggy and we pull away from my villa at the Four Seasons, he looks over his shoulder and asks, “Have you heard the legend of Mahsuri?”

The most popular time to visit Langkawi is from November through March (after the monsoon season), but the archipelago’s forests are at their verdant best from April through July. All of Langkawi’s resorts, which include the four standouts presented below, are on the chain’s namesake main island.

Built on the grounds of a former coconut plantation, this boutique resort’s seven Malay-style homes surround a swimming pool, Jacuzzi, and lagoon. Authenticity is the allure here, especially in the restaurant and bar, where guests are encouraged to mix their own drinks. ($125–$250)

This 110-room resort, which opened in 1993, sprawls throughout a rainforest overlooking Datai Bay. Known for its spa, the Datai also includes a private beach, tennis courts, two restaurants, and two pools, and it is adjacent to an 18-hole golf course that is open to guests. The resort’s guest rooms include 18 suites and 40 freestanding villas set high on a forested hillside. ($350–$2,300)

Also on Datai Bay, the 188-room Andaman features forested paths on which guests can walk to the beach or the Gulai House, the resort’s traditional Malay-Indian restaurant that offers two styles of seating: floor or chair. ($240–$2,000)