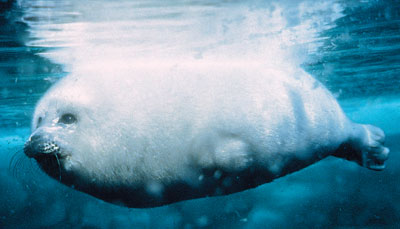 Leonard Chevrier lowers his taut, welterweight-like frame to the ice and, with hands weathered by the sea, tenderly flips a blubbery blanchon on its back. He shows me the clawed appendages, webbed tail, tiny ears, and just-emerging canines, and insists that I remove a glove to feel the intense body heat beneath one of the flippers. The newborn’s elevated metabolism is a survival mechanism against the piercing cold of Quebec’s icy, windswept Magdalen Islands, where, for 17 years, Chevrier has guided tourists to witness the whelping of these white-pelted harp seals. For a decade longer, he has hunted the animals for their flesh and fur.

In early March, as much of northeastern North America begins to thaw, ice continues to grip the Magdalen Islands, a sandbar-linked archipelago in the Gulf of St. Lawrence. A relentless wind sweeps from the polar cap, snow lashes through plumes of dune grass, and ice extends to the horizon at every desolate point on these remote islands where, until a century ago, shipwreck salvage was one of the primary occupations.

But at this time of year, life begins anew on the frozen sea between the Gaspé Peninsula and Newfoundland. For at least 10,000 years, hordes of harp seals and a smaller contingent of elephantine hooded seals have scratched holes through the ice on the Gulf of St. Lawrence, hauled out onto the floes, and whelped. In more recent times, a few hundred intrepid travelers—roughly half of them from Japan—have journeyed to the Magdalens to behold the annual birthing of the blanchons.

I had arrived on the main island of Cap-aux-Meules the night before on a turboprop from Montreal, where a whiteout blizzard and the cold front behind the storm had kept regional air service grounded for two days. Snow devils danced across the parking lot as I shoved into the lobby of Château Madelinot, a rustic, 120-room lodge that opens for three weeks during the seal-whelping season. I expected a salutation in accented English or Quebecois French; instead, I encountered a throng of excited Japanese, who were anticipating the arrival of Mitsuaki Iwago. The famed Japanese wildlife photographer, I soon learned, had been aboard my connecting flight. Iwago was largely responsible for the Japanese presence: His winsome images of baby seals had spurred his countrymen to fly halfway around the world to see these creatures in the flesh.

It was late, so a cold dinner of local delicacies was waiting in my room. After wolfing down the lobster roll and pungent Pied-de-Vent (foot of the wind) cheese, I nibbled tentatively at the house pâté. Served with baguette slices, the spread tasted like beef liver.

Waking to a predawn thwak-thwak-thwak of churning helicopter blades, I pulled on an orange survival suit and squeezed onto one of the first flights out, sandwiched between a professional wildlife photographer burdened with bulky gear and an outdoor adventure junkie from Colorado. Time was precious because the ice sheets shift continuously; seals spotted offshore a week before were now a half-hour flight away.On the ice, the challenges of the shifting landscape become more immediate. Wind and currents constantly reshape the snowpack, obliterating landmarks in a gust or, more insidiously, slowly spinning the floes until a sojourner loses all sense of direction. Cracks and holes in the ice can mean a plunge into a bitterly cold sea. And a mammoth hooded seal, unlike a harp seal, is as aggressive as a bear protecting its cubs.

Still, pursuing our quarry is far less perilous than it was for fur trappers during the height of the seal hunt in the mid-1800s. More than 300 wooden schooners would carry 12,000 hunters from Newfoundland to the whelping grounds, where they would cross the ice on sleds, wooden clubs in hand. Our group instead carries digital cameras as we scan the floes for adult harp seals and the splotches of bloody afterbirth where the babies rest. The first to spot signs of life is a doctor from Rome, who is clad in surgical gloves instead of mittens so he can operate his video camera. This is his second journey to see the seals.

Once my eyes adjust, I begin to differentiate the white-coated seals from the snowdrifts and to pinpoint ice holes where the mothers surface to nurse. The pups suckle for two weeks, swelling from a birth size of approximately 24 pounds to a weight of about 80 pounds before their mothers abandon them. Their body heat melts cradles in the ice, and the roly-poly pups are sometimes visible only by their black noses and eyes.

The 10 travelers in our two-helicopter squadron scatter across the mile-wide floe. The wildlife photographer sets up his tripod and trains a telephoto lens on a snarling hooded seal. A woman of about 70 from coastal Connecticut dashes from pup to pup, determined to touch each one. Some cringe; others nuzzle for affection. What appears to be a seal walking upright toward me turns out to be a passenger from the other helicopter, a Japanese man in a black-and-silver wet suit. Clutching his Nikonos, he steps deliberately to a hole and dives in to photograph the adult seals beneath the ice.

I snap photos with abandon as I pick my way across the lunarlike surface. Helpless babies with big dark eyes, the blanchons appeal to a primal instinct for nurturing. But the sheer number of infants on the ice—too many to count, scattered 20 yards apart—is nature’s callous way of playing the odds. Few blanchons will survive infancy. Some will succumb to exposure; others will be slaughtered by males impatient to mate with the newborns’ mothers. Coyotes will claim still more. And as they shed their baby fur, the seals will become the quarry of the very people guiding us to see them.

“I love animals,” says Chevrier when I encounter him again on the floe. “I love wildlife.” Life in the Magdalens, however, leaves little room for sentimentality and none at all for political correctness. The birth of the seals marks the beginning of the maritime harvest season, when several of the islands’ roughly 13,000 inhabitants make their living by hunting seals and, later, trapping lobsters, dredging for scallops, digging clams, gathering mussels, and netting cod, sole, mackerel, perch, shark, and herring.

Fierce international protests by animal rights groups (Magdalen Islanders grimace at the mention of Brigitte Bardot) and photos of post-slaughter carnage prompted the Canadian government to ban the hunting of white-coated baby seals in 1987. But at three and a half weeks, the seals molt to a short, silvery gray, black-spotted coat and begin to fish for themselves. They then become fair game.The federal harp seal quota—950,000 for the period from 2005 through 2007—aims to stabilize the population at about 5.2 million, an increase from about 2 million in 1970. Fishermen throughout the Gulf of St. Lawrence grumble that the quota is too low, because the rapacious loups-marin, or wolves of the sea, raid lobster and crab traps and gorge on schools of fish. Hunters in Newfoundland claim most of the quota, so Magdalen Islanders such as Chevrier have branched into seal tourism to supplement their income. “I can’t say I like hunting,” he says. “I don’t use a rifle; the seals are too far away and could be wounded. I use a club so they die immediately.” (A baby seal’s skull is barely thicker than an eggshell.)

Although he may not derive pleasure from the process, Chevrier, who has been hunting since the age of 14, enjoys the rewards. “I put the heart and the liver of a seal in a fry pan with wine and onion,” he says, then smacks his lips. “It’s perfect.” Most Magdalen Islanders—virtually none of whom wear the extravagantly expensive blanchon furs—share Chevrier’s taste for seal meat.

After a morning on the ice and a soak in the hot tub at Château Madelinot, I head for dinner at the islands’ best restaurant, La Marée Haute. Dijon-born and -trained chef Patrick Mathey is a champion of seal meat. His menu that night features both a seal pâté appetizer and a seal chop main dish. I realize immediately that my arrival-night dinner pâté had been, without a doubt, loup-marin.

Making a note not to visit the island’s sheep farm, I order a rack of salt-meadow lamb.

Going with the Floe

Traveling to Quebec’s Magdalen Islands for the brief seal tourism period, which runs from February 27 through March 17 in 2006, can be a test of one’s patience. Weather frequently forces local airports to close, so you may have to bide time in Montreal while waiting for one of the scheduled Air Canada Jazz turboprops that fly to Quebec City, then Gaspé, and finally to the Magdalen island of Cap-aux-Meules.

Set on an east-facing beach just outside the village of Cap-aux-Meules, Château Madelinot (418.986.3695, 800.661.4537, www.ilesdelamadeleine.com/hotels/chateau) becomes the center of activity on the Magdalen Islands during the seal-whelping season. The hotel has 120 comfortably, if not luxuriously, appointed rooms, as well as two suites, a bar, a restaurant, and an indoor pool and sauna. Château Madelinot’s three- to six-day packages (about $990 to $1,635 per person) include a three-hour sojourn on the ice (weather permitting) and three half-day tours of the archipelago. Additional ice trips sometimes are available for an added charge, and the hotel will arrange other activities—including kayaking between the floes in a survival suit and parasail-aided skating and ice-sledding—that take advantage of the Magdalen Islands’ unique climate and terrain.

For a distinct dining experience, which may include seal meat, visit La Marée Haute (418.937.2492) on the island of Havre-Aubert. Chef-owner Patrick Mathey serves sophisticated contemporary French cuisine that utilizes harp seal and other local ingredients from the Magdalens and neighboring areas of Quebec, Prince Edward Island, and Cape Breton.