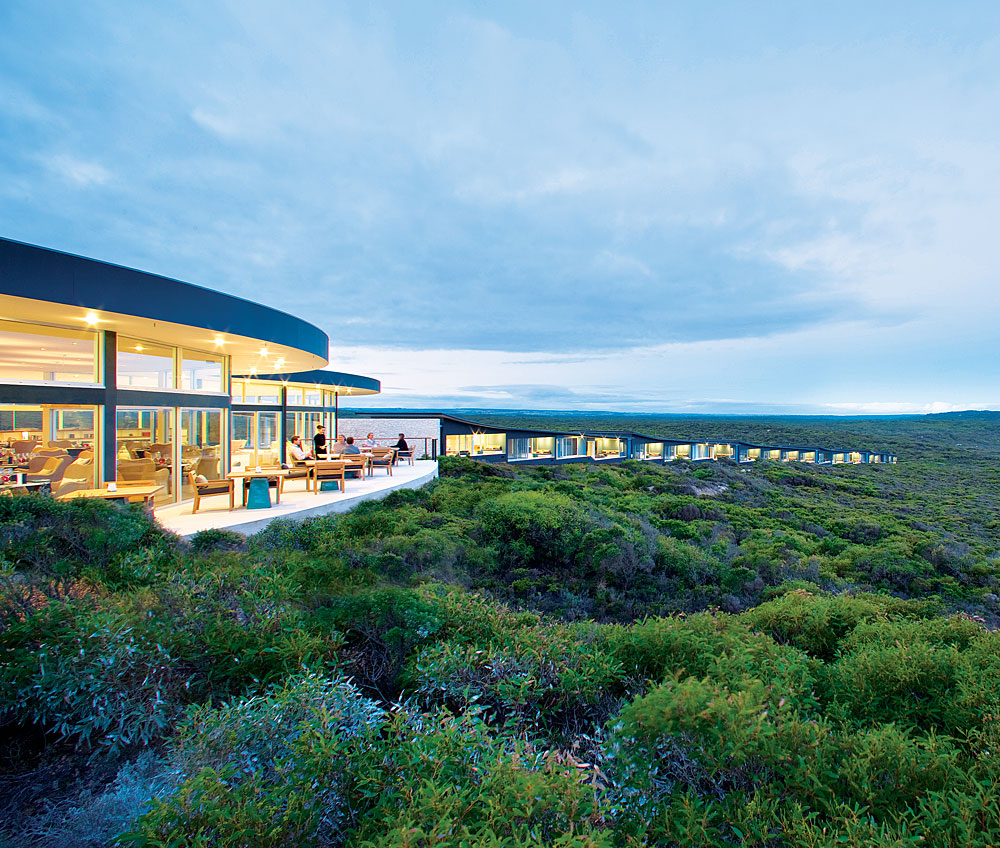 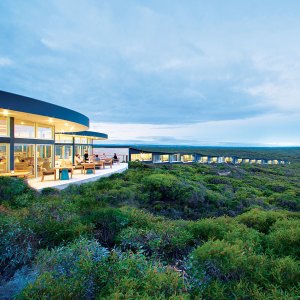 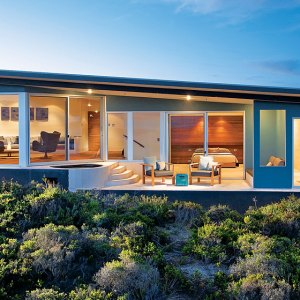 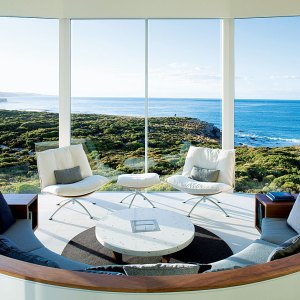 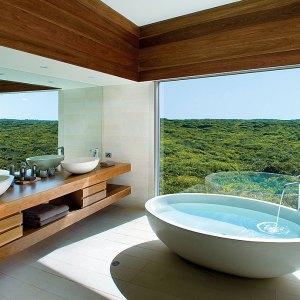 In a brilliant morning at Seal Bay on Kangaroo Island, off the southern coast of Australia, hundreds of sea lions are doing what they have done for aeons: feeding and frolicking in the waves, nursing their pups, and sunbathing with their necks extended to the sky as if performing a group yoga stretch. Sandy McFeeters, the “experiences manager” at the new Southern Ocean Lodge, cautions me to stay a safe distance from the animals as we walk among them on the beach. “At Kangaroo Island, we have such a large variety and accessibility of wildlife species that we can guarantee people will see them,” says McFeeters, while I resist the temptation to pet one of the cuddly pups. “But it’s observation without interaction.”

Among the wildlife found on Kangaroo Island are koalas, tammar wallabies, New Zealand fur seals, southern brown bandicoots, short-beaked echidnas, and even platypuses. Of course, one of the most common animals on the island—more than a third of which is designated for conservation or as national parkland—is the kangaroo. My first sighting of the marsupial, unfortunately, is in the form of roadkill along the street from the airfield. Animal-related accidents are so common on Kangaroo Island that residents often refrain from driving after dark; during one predawn outing, my driver proceeded slowly and dodged a number of creatures as they bounded out of the bush and onto the road.

Kangaroo Island’s inhabitants have not always been so considerate of the local wildlife. In 1802, British captain Matthew Flinders and his crew landed on the 1,700-square-mile island following four months at sea without fresh food. After feasting for days on the plentiful marsupials, the grateful captain gave the island its name. American sealing and whaling companies soon discovered Kangaroo Island and eventually hunted the area’s seals (and kangaroos) to near-extinction.

In more recent years, koalas, which were introduced to Kangaroo Island, have so flourished that their favorite food source, the manna gum tree, is being decimated. Authorities have tried to control the koala population through surgical sterilization, but the program thus far has been ineffective.

Native or not, Kangaroo Island’s abundant wildlife has long attracted nature lovers to this Australian outpost, located 80 miles southwest of Adelaide. But until this year, visitors to the island had few, if any, upscale lodging options. That changed in March, when the husband-and-wife team of James and Hayley Baillie opened Southern Ocean Lodge.

Several residents of Kangaroo Island initially opposed Southern Ocean Lodge, fearing that a Gold Coast–style high-rise would blight their pristine shore. The Baillies, however, allayed those concerns when they hired architect Max Pritchard, who grew up on the island. Pritchard’s building is a subtle, winglike, low-rise structure that blends into its sea-cliff setting.

Like New Zealand’s Huka Lodge and the hotels in Southeast Asia’s Amanresorts chain—which the Baillies cite as inspirations for their hotel—Southern Ocean Lodge emphasizes sensitivity to the environment. James, the former managing director of P&O Australian Resorts, is well versed in developing eco-friendly luxury accommodations; his past projects include Lizard Island and Heron Island on the Great Barrier Reef, Silky Oaks Lodge in the Daintree Rainforest, and Cradle Mountain Lodge in the Tasmanian wilderness. He and Hayley established their Baillies Lodges group in 2003 and opened Capella Lodge on Lord Howe Island the following year. Today their portfolio also includes Bedarra Beach House (a private retreat on Australia’s Bedarra Island), and the couple plans to open a new resort, Remarkable Lodge, on the Tasman Peninsula in 2010.

The Baillies came to Kangaroo Island at the behest of Hayley’s father, Dick Smith, a well-known philanthropist and adventurer in Australia. About five years ago, they acquired 252 acres on the island’s southwest coast. After reading an article about Pritchard, James contacted the architect to discuss his concept. “James rang Max, they met, and they hit it off—it was as simple as that,” says Mat Daniel, Southern Ocean Lodge’s manager. “Max came out to the site, walked around, and immediately started sketching.”

Pritchard’s design exploits the drama of Southern Ocean Lodge’s cliff-top setting. To enter the main lodge, you open a pair of gigantic, rusted steel doors. As you step into the open, curved great room, you encounter an uninterrupted ocean vista—the centerpiece of the building’s design. “When we looked at the site, this was an ideal perch for the main lodge, because the view is paramount to everything,” explains Daniel.

The hotel’s 21 suites follow the natural contours of the long, sloping cliff adjacent to the main lodge. Although spectacular, the site did present its share of challenges. During the 14-month construction process, crews had to be rotated in and out of Adelaide every two weeks. Adding to the logistical challenges, lightning storms last December ignited a forest fire that burned 20 percent of the island. Flames came within approximately a mile of the nearly completed lodge, prompting an evacuation. “It was a little crazier in the last few weeks than it might have been,” Daniel recalls wryly.

In building Southern Ocean Lodge, the developers employed materials such as reclaimed antique Australian timbers, local limestone for the walls, and 180 tons of white limestone from Italy for the floors. Pritchard’s design is modern and understated, with neutral tones of blue, brown, beige, and gray that do not compete with the suites’ ocean views. The lodge’s premier accommodation, Osprey Pavilion—each suite is named for one of the shipwrecks that have occurred off the island—is nearly 1,300 square feet and features a sunken lounge area and an open bathroom appointed with a handmade concrete tub.

Expanses of glass on the north side of each suite maximize the radiant heat of the sun in winter. When temperatures climb in the summer, floor-to-ceiling windows slide open to let in breezes. Other conservation-minded touches include a sewage treatment plant that consists of a series of worm farms in large holding tanks. (“The animals break down and eat the nasties,” notes Daniel.) LED lights minimize electricity consumption, as does a computerized system that can shut down lights and heated floors and towel bars when guests leave their rooms.

Though it is difficult to imagine in a setting dominated by sea views, water is also a limited resource on Kangaroo Island. Gutters lining nearly the length of the main lodge’s roof catch rainfall; the property aspires to be self-sufficient with respect to water in four out of every five years. One day during my visit, about a half-inch of rain yielded approximately 10,500 gallons of water, which carbon-filter and UV treatment systems cleaned without the assistance of chemicals. The lodge’s tanks can store nearly 400,000 gallons of rainwater for those sunny days.

Southern Ocean Lodge’s concept of self-sufficiency extends to its beverage service. At the expansive bar in the great room, you can help yourself to an array of soft drinks, beers, and cocktails, as well as wines from acclaimed vineyards in South Australia’s Coonawarra, Barossa Valley, McLaren Vale, Adelaide Hills, and Clare Valley regions. Wines from Kangaroo Island are also available at the bar and for purchase in the lodge’s Cellar Room.

In addition to wildlife, Kangaroo Island is known for its cheeses, sheep’s milk, yogurt, free-range chickens, and eggs. In 1884, beekeepers imported bees from the Italian province of Liguria, and the island’s apiarists now lay claim to the world’s only pure strain of the insects, thanks to their remote setting. Quarantined to protect them from their mainland brethren, the rare bees produce a honey that is valued for its purity as well as for its purported medicinal properties, which are exploited in the Southern Ocean spa’s Ligurian Honey & Almond Polish treatment.

The island’s vibrant food culture took root in the 1980s when the Australian wool market crashed, leaving sheep farmers desperate for alternatives. “People risked losing their farms unless they did something different,” explains Craig Wickham, managing director of Exceptional Kangaroo Island, a tour service that partners with Southern Ocean Lodge. My tour with the company includes visits to Admiral’s Arch, which is home to thousands of New Zealand fur seals, and to Remarkable Rocks, a dramatic outcropping that could be the work of Salvador Dalí.

After leading a walk through the bush to spot koalas and wallabies, Wickham plucks a bagful of giant mushrooms from under a tree. We drive to a farm and pull over by a stand of trees, and he leads me to a tent outfitted with a stove and picnic tables.

I expect no more than a sandwich and drink, but Wickham has other plans. He starts to prepare potatoes, the mushrooms, and some fresh-caught King George whiting, while I sip a glass of Sauvignon Blanc. By now well practiced in the art, I observe—but do not interact—as sheep graze in the pasture and a steady wind rattles the branches in the canopy.