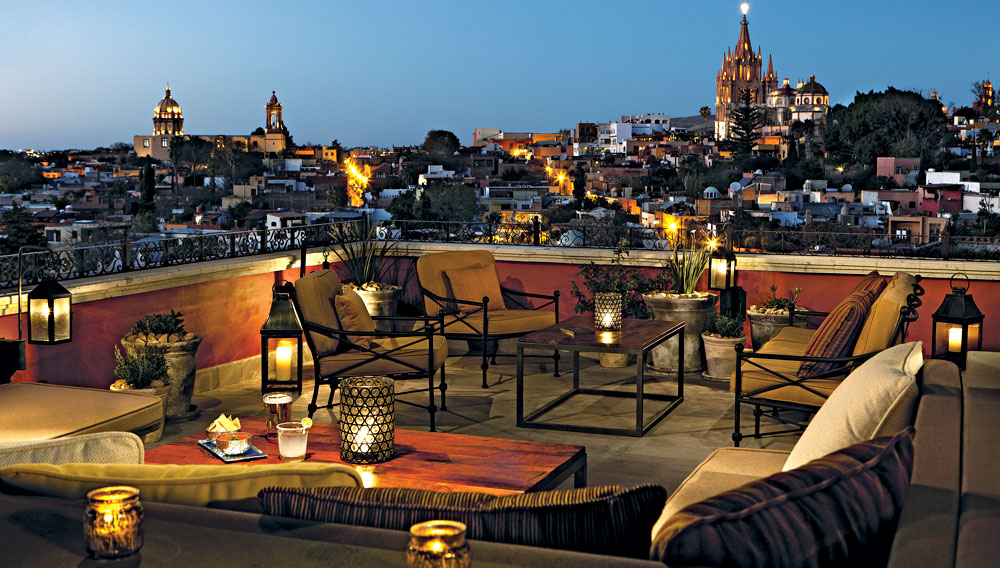 It is an hour before midnight, and a large crescent moon has risen above San Miguel de Allende. The clangs of a church bell mark the hour, but silence soon returns to the Mexican city’s historic core. Suddenly, the whinnies and snorts of horses and the clippity-clop of hooves slapping against cobblestone streets signal the approach of a band of vaqueros. The ranch hands—at least a dozen of them, from perhaps three different generations, in sweat-stained straw hats and scuffed boots—pull up to a bare-bones saloon with swinging wooden doors. They tie their horses and one ancient-looking donkey to a railing that has been used for this purpose since the Wild West days. A 12-piece mariachi band strolls over from the town square, a half block away, to greet the men with a song. Twangy guitars set a quick rhythm. Trumpets blare. An accordion joins the melody.

It is just another Friday night in San Miguel de Allende.

San Miguel de Allende—known simply as San Miguel—is a former Spanish colonial outpost in the mountains of central Mexico. Established in the early 16th century, the town was the first in Mexico to declare its independence from Spanish rule in the early 1800s. Much of San Miguel’s historic downtown area, El Centro, still resembles a scene from the past. The streets and many of the sidewalks are paved with stones, now brilliantly polished from being trodden upon for centuries. Cowboy saloons are common, their swinging wooden doors barely hanging onto their hinges.

El Centro is also home to several walled-courtyard mansions constructed in the 18th and 19th centuries. From the street, many of these former aristocratic palaces do not look like much. But when their doors swing open, they reveal sprawling historic structures revived as posh private villas. Most of the villas’ owners live in San Miguel only part-time, sometimes as little as two or three weeks a year, and the homes have long served as vacation rentals for movers and shakers from Mexico City (a three-hour drive south) and foreigners, especially oil-rich Texans. Until recently, these private homes—often serviced by armies of cooks, maids, and gardeners—were the only true luxury options in San Miguel. That changed with the opening of the Rosewood.

San Miguel has never been short on enchanting boutique hotels or quaint B and Bs, but before the Rosewood’s arrival the city did not offer anything that could match the impeccable service, cuisine, and attention to detail of top resorts in Los Cabos, the Riviera Maya region, and elsewhere in Mexico. Indeed, for much of the past two decades, the best hotel in town has been Orient Express’ Casa de Sierra Nevada, a lovely collection of historic mansions and houses that have been painstakingly restored. But part of what makes the Sierra Nevada so charming is also what holds it back: As beautiful as the historic houses might be, they are also somewhat rustic. Only a handful of the beautifully appointed rooms and suites are actually air-conditioned—a problem in the short but brutally hot summer season.

Many of the town’s best private villas are likewise lacking in modern conveniences. Retrofitting, rewiring, and replumbing the town’s most stunning old mansions is a rather complicated (and politically difficult) undertaking. Summer is considered low season in San Miguel for no other reason than that most accommodations simply do not have good A/C.

When construction crews broke ground on the Rosewood San Miguel about three years ago, some of the town’s residents and frequent visitors worried that the resort would detract from San Miguel’s small-town charms. From the beginning, Rosewood and the developers who were planning the property took the concerns to heart. One reassuring point for locals—and the developers—was that the construction did not involve any heritage buildings. The resort, with its 67 rooms and suites, and the adjacent block of 29 private Rosewood residences were entirely new builds on a patch of land that had previously been an eyesore.

The Rosewood’s architectural blueprint called for a hotel that blended seamlessly with the 19th-century structures throughout the neighborhood. The property sits adjacent to San Miguel’s largest park, just on the fringe of El Centro, and is lined with several jacaranda trees that were preserved during construction. Master craftsmen pressed bricks in the centuries-old local style. In the guest rooms, wooden floors were installed in such a way as to make them creak just like the squeaky old floorboards of so many of the city’s most romantic homes.

In the finished hotel, which opened in February, most rooms and suites come with a fireplace—albeit a gas-fueled, switch-operated version that is not quite as romantic as the wood-burning hearths found elsewhere around town. But the Rosewood also has air conditioning and central heat, rarities in a city where winter nights can be downright cold.

The Rosewood’s debut was significant enough to warrant an official visit by Mexican president Felipe Calderón, who dropped in via his helicopter brigade for the grand opening. And it did not take long for San Miguel’s previously skeptical townsfolk to adopt the new hotel as their own.

Ever since the Rosewood opened, locals have been flocking to the resort’s rooftop bar on a nightly basis. Luna does not take reservations, so the residents often try to show up early in order to claim the best corner table in town for watching the sunset. The hotel’s refinement and standard of service also seem to be attracting a new crop of visitors to the mountains of central Mexico. But if this modern luxury resort has introduced a new element to town, it certainly has not spoiled San Miguel.

Despite this latest triumph of gentrification, San Miguel is not in any danger of losing the traditions and quirks that have always made it such an appealing destination. A policeman, wearing what looks like an old revolutionary-guard uniform, still patrols El Centro every day on horseback. The townspeople—a harmonious mix of indigenous Mexicans, Texas expats, long-haired artists, and nattily dressed drifters—still gather on the square every afternoon for socializing beneath a massive canopy of laurel trees, where businessmen have their shoes shined and street-cart vendors sell boiled corn and hand-churned ice cream. Couples, young and old, hold hands and cuddle on park benches as the mariachis stroll the grounds. And vaqueros still hitch their horses outside swinging-door saloons before blowing off some steam on a Friday night.