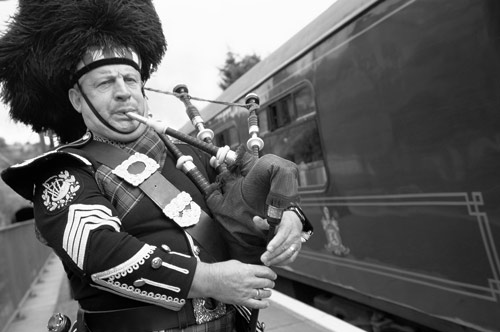 “We’ll be stabling tonight in Taynuilt,” said the man across the aisle, looking up from his itinerary as if to savor the word. It was yet another affirmation of why we had chosen this trip. On any other train, it would simply be referred to as pulling off for the night on a siding, but not when one is traveling aboard the Royal Scotsman.

We had boarded in Edinburgh’s Victoria Station, escorted by a piper in kilt and buskins. “There’s a rule of thumb in Scotland,” another of the travelers, a Brit, quipped as we trooped along the platform with the strains of “Scotland Forever” churning the air. “Whatever you’re doing, it costs twice as much when there’s a piper along.”

Yet there was no denying that the occasion called for a piper. While the stewards stowed bags, the passengers followed the narrow corridor until they reached the observation car at the rear of the train, the social hub for the journey, which resembled a London gentlemen’s club.

There came a whistle from the snub-nosed diesel engine up front, then a gentle tug, and the 457-ton Royal Scotsman—a nine-car train fitted with creature comforts, gourmet cuisine, and a permanently open bar stocked with top-shelf liquors and vintage wines—was off. Sitting there, sipping our Champagne, feeling the gentle rocking of the train, watching the Edinburgh cityscape give way to farmlands occupied by sheep and colored with gorse and heather, it was easy to see why, for experienced travelers, a luxury train ride has become a trophy experience.

Unlike air travel or high-speed motoring, railroads—and their stations—are 19th-century phenomena, built to accommodate a more genteel pace of travel, and the sensation of rolling through towns and across the countryside has not changed for a century and a half. Instead of sitting buckled into your seat, you are free to get up and stroll about, or even step outside to catch the breeze and wave back at children watching you roll by. No wonder that in an age of road rage and air rage, one never hears of rail rage.

Add to this the trappings of exclusivity—posh furnishings and private staterooms—and the luxury train becomes the ultimate in travel. It is the kind of thing once thought lost in the headlong dash to efficiency and mass transport. Yet, in the last decade, luxury train travel has boomed, with the Royal Scotsman, operated by the Great Scottish & Western Railway Co., catapulting into a class of its own.

Not only is the Royal Scotsman said to be the most opulently fitted of Europe’s regal rail-runners, it is also the most intimate, with barely a third of the capacity of the 100-passenger Orient Express. More to the point, it bears testimony to the ancient Zen adage: It is not the destination, it is the journey. Unlike the vast majority of premium trains, which transport guests from Point A to Point B with an incidental overlay of luxury service and amenities, the Royal Scotsman exists to coddle its passengers while immersing them in Scottish lore. Our Highlands sojourn was interspersed with private tours of magnificent castles, a boat ride off the seacoast, an encounter with exotic animals, and lessons in how to smoke a fish.

But first, introductions were made and ice was broken, for travel like this presupposes a sense of sociability and shared adventure. This is especially so on a train built to accommodate a maximum of 36 passengers, and even more so when—because of the publicity at the time of Britain’s foot-and-mouth disease problems—there are only 10 on board. Fortunately, the other passengers were erudite, refined, and amiable, without being unbearably sophisticated. Before long everyone was chatting and laughing and pointing out the sights to each other like schoolchildren on a field trip.

Of course, the trip itself is a very adult experience. Though certainly not stuffy, the Royal Scotsman is the antithesis of the “anything goes” attitude that dominates the mass travel market. In keeping with the train’s upper-crust tone, two of the evenings are black tie, but every night is spent dining by candlelight in Victory, as the main dining car is dubbed, on tables set in gleaming white linen with full services of sterling silver and crystal, and the Scotsman’s signature china. Chef Nick Capon, formerly of the French Laundry in Yountville, Calif., Charlie Trotter’s in Chicago, and Aureole in Las Vegas, was every bit a match for the train’s am-bience, preparing dishes such as wild mushroom parfait, roast loin of lamb, and prune and Armagnac soufflé, all of which were nothing less than memorable.

Since the main purpose of the Royal Scotsman is to enjoy the countryside rather than merely cross it, the train does not travel at night. “I’m grateful it doesn’t,” said Dan, a computer tycoon and a seasoned train buff who rides five or six specialty trains each year. “It can be tough sleeping in a moving train. It’s not like sleeping on a boat.” Dan’s admonitions to the contrary, the slight rocking motion proved to be perfect for the occasional nap as the train clickety-clacked along. Though it can reach a top speed of 75 mph, it travels at 40 to 50 mph to assure a smoother ride and a more leisurely look at the ever-changing tableaux outside.

As with any train ride, there is plenty of scenery, only—since this is Scotland—more of it. Few parts of Europe remain so unspoiled by commercialism and modernity, so faithful to their own heritage. As in the 17th century, the countryside remains dotted with “black houses,” rugged one-story stone dwellings with thatched roofs but no chimneys. On our first morning on board, we passed the ruins of Kilchurn Castle during the eggs and Scottish bacon, slid by the Royal Castle at Stirling over a second cup of coffee, and caught a glimpse of Blair Castle during a lunchtime dessert of sticky toffee pudding. The most compelling of the castles and villages are toured up close via a private, panoramic-windowed bus that shadowed the train’s route from stop to stop. If only we had studied history in school this way, the passengers observed to each other.

By our final night on board, we felt like old school chums. Amid single-malt toasts, we complimented each other on what terrific traveling companions we had been, traded e-mail addresses, took more pictures, and rehashed our ex-periences and highlights of the trip. There was Eilean Donan Castle, which broadsword buffs among us recognized immediately as the rugged, majestic backdrop for the movie Highlander, and the fascinating Highland Wildlife Park in Strathspey, near Inverness. The park is home to such animals as the European bison, a wooly-humped animal similar to the breed that once roamed the American plains; Przewalski’s Horse, a muscular wild breed so ferocious that the bison give them a wide berth; and the turkeylike Capercaillie, Gaelic for “horse of the woods,” so-called because its call sounds like a horse clopping through the forest. We also recalled our magical afternoon at the rustic seaside fishing village of Plockton, where a small open-cabin fishing boat carried us out into the bay to watch the seals lolling on the rocks like mermaids. The captain had promised that if we sang, the seals would swim over to us, but even fueled with the local brew, our harmonizing proved to be of no avail.

On our last morning aboard, we awoke to an unaccustomed clatter as a jumble of ocher-colored steel spans flashed past the windows, evidence that we were crossing the Firth of Forth bridge. When it was built in 1890, the 8,276-foot-long bridge, a spidery construct of steel cantilevers and spans, was hailed by some as the eighth wonder of the world. For the passengers gathering for breakfast, it was the omen that our journey was about to end. The Royal Scotsman would soon be pulling into Victoria Station, and we would all return to the world of schedules, computers, and cell phones.

If nothing else, our journey reaffirmed that this was the way we were always meant to travel, at no point strapped into tiny seats nibbling microwaved “gourmet” fare, nor staring blankly out over the ocean wondering if we would ever pull into port, nor once getting stuck in traffic.

Eager to hold on to the experience, I strolled out onto the rear platform to watch the bridge fade from view. Shortly thereafter, I recognized Edinburgh Castle on its hilltop overlooking the town as we pulled into Victoria Station. It was an unceremonious entrance, with nobody in kilt, buskins, and bagpipe to hail our return. A shame, really, because there could have been 20 pipers and it would have been worth it.

The Royal Scotsman’s Classic Tour, a five-day, four-night journey through the Scottish Highlands, is the most comprehensive of its itineraries. The 36-passenger train departs from Edinburgh’s Waverley Station and heads west along the northern bank of the Clyde, then north to Dalmally, where guests may visit a fish smokehouse and sample the local delicacies. From there it backtracks east and then travels as far north as Elgin before continuing its circuitous route back to Edinburgh.

Stops along the way include side trips to Ballindalloch Castle, Highland Wildlife Park, Eilean Donan Castle, which stands at the promontory of three sea lochs and was impregnable until the advent of the cannon, and Strathisla Distillery for a tasting of single-malt scotches. Passengers are also transported to Kyle of Lochalsh, passing what some consider to be the most scenic route in all of Britain, and the Isle of Skye, the site of Scotland’s only mountains.

In addition to the Classic Tour, which runs April through October, the Royal Scotsman offers two three-day/two-night excursions. The train is also available for private charter.