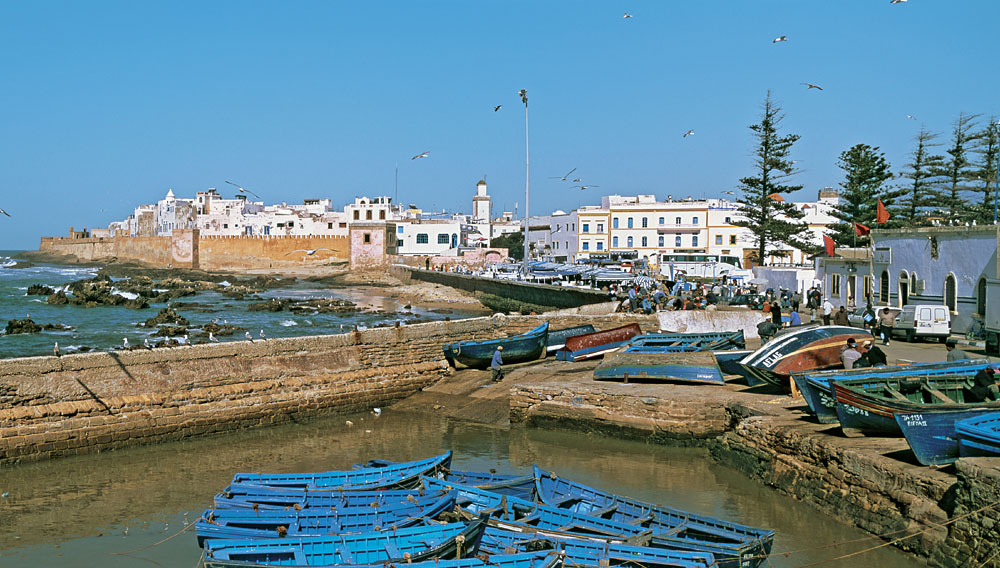 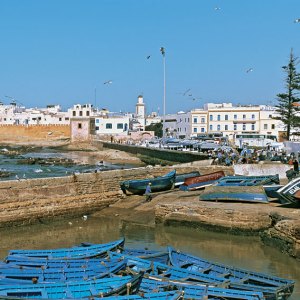 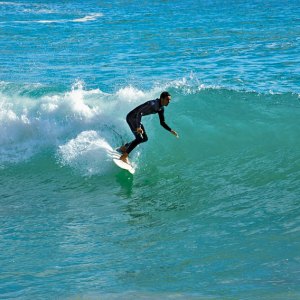 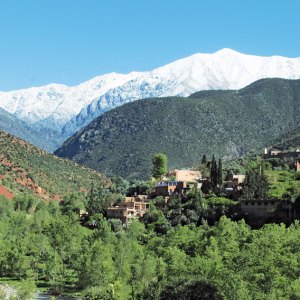 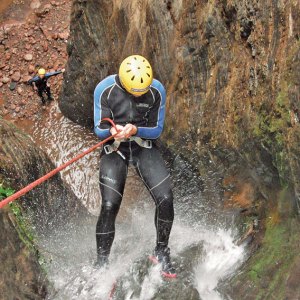 Wind-whipped, the wave rises, heaves, and churns as it rushes toward the shore and spits out a man in a black neoprene wet suit. His arms and legs flail as he sputters for air and struggles to his feet. It is, says Azzedine, his instructor from the Explora surfing school in Essaouira, Morocco, an improvement. “Only next time, don’t fight the waves,” he advises. “Crawl up to your knees on the board and hold your arms out to the sides to balance.”

I wade back into the shallow surf, dragging the board behind me like a reluctant knight lugging his escutcheon back to the fray. Close by, my fellow neophyte Julia, a young model from Paris, offers a smile of encouragement. Or is it condolence? Either way, I am certainly not the first foreigner to be dashed against the Moroccan shore. As the nearby wreck of a centuries-old wooden ship attests, sailors have long feared this stretch of coastline where the Atlantic washes over the sands of the Sahara.

An ancient stomping ground of North African pirates and nomadic Berbers, Essaouira owes its forts and battlements to the medieval Portuguese and Moors. The inner city, not far removed from the beach, today brims with boutique hotels, cafés, and artisan shops daubed chalk white and traditional purple. (Roman emperors once demanded that their robes be dyed in purple from Essaouira.) The harbor remains a busy fishing port, and the dawn sky is streaked with orange as the fishermen ride the tide out to sea each morning. Come midafternoon, the seabirds’ chorus announces the boats’ return, nets heavy with sardines, mackerel, shrimp, and octopus. Camels move slowly along the shore, bells jingling from their harnesses. It is all—as Jimi Hendrix, Cat Stevens, and Bob Marley, visitors from the 1960s, may have observed—far out!

Of course, people have been saying that about Morocco for decades. But they traditionally were not talking about the surf. “There was a time when tourists came to Morocco just to see the sights,” says Mohamed Bouskri, the proprietor of Riad Kniza, a posh hotel de charme in Marrakech. “The palaces, the souks, the shops, the riads.”

Now, says Bouskri—who has escorted the likes of Presidents Nixon, Carter, and Reagan through Marrakech—the sights and sounds of the medina are just the beginning. “Our guests want to be active,” he explains. “They want to play golf and tennis or go horseback riding and camel trekking into the Sahara. Or they go mountaineering and glacier climbing. Even skiing.”

If sports and adventure are what travelers want, says Bouskri, Morocco is the place to go: “Morocco is a sportsman’s paradise. We have some of the world’s finest golf courses, and there are tennis courts everywhere. It is always sunny on the seashore, and there is always snow on Mount Toubkal. If a guest desires, we can take him surfing in the Atlantic one day and skiing in the High Atlas mountains the next.”

Indeed, for those who know where to look, Morocco offers adventure at any altitude. About three hours east of Essaouira, the road begins its serpentine ascent into the High Atlas mountains. All around, waterfalls tumble down hundreds of feet from barren volcanic ledges to nurture the Ourika Valley, whose floor is lined with walnut trees and fruit orchards. The terra-cotta cliffsides are riddled with balcony-like dwellings overlooking the valley for miles in all directions.

For the Berbers who reside here, the fundamentals of their agrarian life have gone largely unchanged since prehistory. Few of the residents find it necessary to speak French, and many of the women do not even speak Arabic.

However bucolic their homeland, the Berbers could be fierce warriors when provoked. “There were always invasions—first the Romans, then the Arabs, then the French,” says my guide, Abdel. “But the Berbers could make things uncomfortable for anyone who wanted to impose another way of life on them.”

This is not to say that Berbers are not amused by outsiders. In fact, a group of farmers in a nearby cherry orchard appears highly entertained by the goings-on at the edge of the Ahansal River, where Andy Robertson, the Scottish owner of Splash Morocco, is launching a white-water-rafting trip. As Abdel and I arrive, Robertson and a half-dozen vacationing Brits in helmets and life vests are loading into a pair of rubber rafts at the rocky headwaters.

As for the sporting opportunities higher up the mountain, that depends on one’s expectations. “It isn’t the Alps,” Robertson says. “You don’t have the European tradition, and you don’t have the infrastructure. But for hard-core skiers, the High Atlas is becoming a must.”

With that, Robertson climbs into a boat and, with a chorus of yells registering their excitement, the rafters push off into the froth. For a moment Abdel and I watch them bob and bounce their way downstream like bumper cars at a carnival, then we climb into our SUV to continue our journey. Somewhere up ahead lies Mount Toubkal, a place where the lift lines are nonexistent, the slopes are almost always sunlit, and the snow rarely melts.

The journey to Toubkal includes one of the most remarkable experiences in Africa—a close-up look at the tiny hamlet of Imlil, the Aspen of the High Atlas. There is a fairy-tale feel to Imlil, a village of simple apartment houses and perhaps a dozen storefronts, with mules and Berber guides milling about on the roadside. As we pull up in town, I notice a shop with rental skis stacked by the doorway. However incongruous—there is not a spot of snow in the village, and the temperature is in the 70s—I take this as a good sign. What I do not see is Imlil’s landmark Kasbah du Toubkal.

“Which way to the casbah?” I ask, dropping my bags at a battered desk by a doorway that appears to serve as reception. Like a scene from an old Bob Hope movie, without a word the man at the luggage desk points overhead. I slowly lift my gaze to see where he is pointing, then look higher and higher until—yikes!—I am looking straight up. There, like some magical castle perched a mile overhead, is the one-time fortress and summer home of the local pasha. If it dislodged from the hillside, it would fall straight down on top of us.

“How are we supposed to get up there?” I ask Abdel.

Twenty minutes later, leg-weary and out of breath—I rejected the idea of a mule as cheating—I am reminded why the Kasbah du Toubkal and the surrounding landscape served as the backdrop for the movie Kundun.

However rugged the climb to reach it, my suite at the Kasbah du Toubkal is—literally and figuratively—breathtaking. I will need to adapt to the altitude quickly, however, as the air, I am told, is 30 percent thinner at the summit.

As a ski destination, Mount Toubkal is reserved for only the most adventurous—ones who are willing to trek with their equipment to the top and ski down. Morocco’s best-known slopes are found at Oukaïmeden, a nearby resort with a proper chairlift, a T-bar, and mules serving five separate ski trails running nearly two miles long. New upscale condominium developments in the area suggest that gondolas and high-speed quad chairs may not be long in coming. “Now if only we can get the king off his surfboard and onto his skis,” says a young concierge at the Kasbah du Toubkal.

As any Moroccan surfer will tell you, the sport was popular long before King Mohammed VI ascended the throne. Surfing came to Morocco in the late 1950s, when Americans from a U.S. military base outside Casablanca discovered the nearby empty beaches with the soft, forgiving sand banks and waves curling up to half a mile. By the late 1960s, Essaouira was an established stop on the North Africa–to-Spain hang-10 hippie trail.

King Mohammed VI entered the picture in the 1990s. The athletic young monarch was already known to be an avid surfer, Jet Skier, and tourism advocate when, as the story goes, a chance conversation with a local surfer persuaded the king that what his country needed was a surfing club. The result was the Oudayas Surf Club, a gleaming-white two-story facility in Rabat overlooking some of the country’s best waves. Today the club’s thousands of members include some of the world’s most highly ranked professionals, but the surfers from Essaouira are no less competitive than those from Rabat. “This is a serious beach,” says Azzedine. “This isn’t a beach where people come to lie in the sun—it’s a place to surf.”

For some, the garden-variety form of surfing is just the beginning. If I want to try my hand at another style of the sport, Explora’s beachside adventure center offers windsurfing as well. “Windsurfing is a more technical sport,” Azzedine says. “It helps if you know how to sail.” Or there is kite surfing, now a highly popular form of the sport in Essaouira. “Everybody wants to do it because it looks spectacular, but it is not really so hard once you know how,” Azzedine says.

Perhaps, but I am just starting to get the hang of the old-fashioned form of surfing. So saying, we decide to try another stretch of beach. With hundreds of miles of Atlantic coastline on hand, somewhere out there the perfect wave is waiting for me.

From casbahs to riads, the following four hotels serve as prime jumping-off points for authentic outdoor adventures in Morocco.

L’heure bleue refers to that moment when the sky seems to take on a nostalgic glow. The moment is especially romantic at this boutique-style Relais & Châteaux hotel in Essaouira. A magnificently restored riad, Heure Bleue Palais comprises 34 rooms and suites, some with king-size beds and oversize bathtubs. The marvelously atmospheric lobby and bar are sculpted from mahogany; the rooftop houses a solarium and heated swimming pool. +212.5.24.78.34.34, www.heure-bleue.com

Mohamed Bouskri’s Riad Kniza has earned a global following for its impeccable service and attention to detail. Bouskri especially enjoys orchestrating special events and dinners on the 18th-centuryriad’s rooftop, which overlooks the medina, but his property also specializes in arranging adventures outside Marrakech. +212.5.24.37.69.42, www.riadkniza.com

For trekkers, the Kasbah du Toubkal is North Africa’s preeminent destination. The massive compound includes 14 guest rooms and two suites with floor-to-ceiling windows, carved wooden doors, exposed beams, and stunning views of Mount Toubkal, which adventurers can scale and, if they choose, ski down. +212.5.24.48.56.11, www.kasbahdutoubkal.com

Sir Richard Branson’s Kasbah Tamadot is situated barely an hour’s drive from Marrakech. Behind high walls, 27 bedrooms and suites are brightly painted and furnished with antiques and exotica from around the world. The resort offers trips to Mount Toubkal, among other excursions. 212.994.3070, www.kasbahtamadot.virgin.com