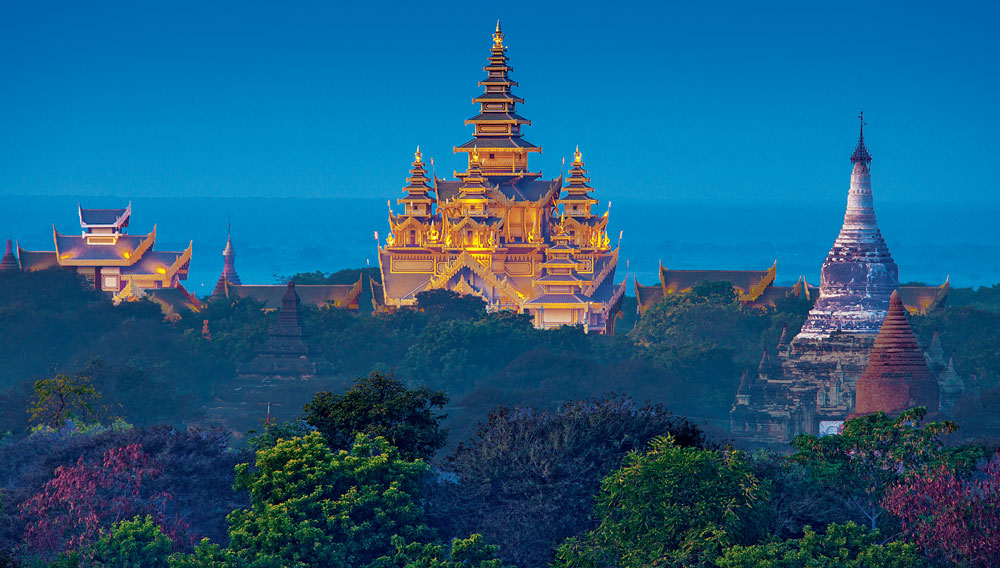 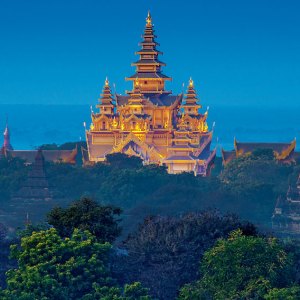 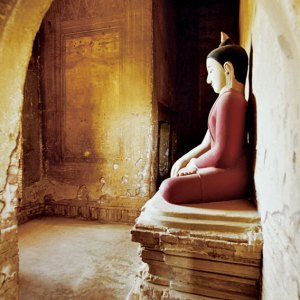 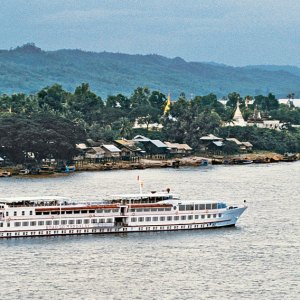 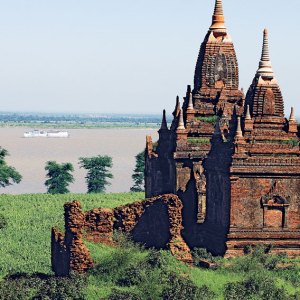 The Burmese night is quiet as my fellow passengers and I file onto Road to Mandalay’s observation deck. Clustered around the cruise ship’s swimming pool, glasses of brandy in hand, we stare into an endless inky sky, its millions of sparkling stars cast over the Irrawaddy River like a fishing net. We have been summoned by the ship’s crew with promises of an after-dinner surprise, but the calm waters lapping at the sides of the vessel indicate nothing more than another tranquil night in Burma.

Then, faintly at first, a line of flickering colored lights emerges on the horizon, just above the bow. Gradually the lights draw nearer, propelled by the river’s current, until minutes later we are engulfed by thousands of glowing candles floating by on tiny banana-leaf boats. Numbering 2,012 exactly, the candles mark the end of the year’s rainy season and the culmination of a monthlong Buddhist festival called Kathina, in which monks are presented with new robes and alms. The procession eventually floats on, illuminating the Irrawaddy around it and leaving Road to Mandalay behind in the darkness.

The candles of the Kathina festival are a fitting spectacle aboard Road to Mandalay, an Orient-Express river cruiser that in many respects has lit the way for Burmese tourism. Launched in 1995, the 333-foot, 43-stateroom luxury liner was the first of its kind in the country, plying the 120-mile stretch of river between the ancient kingdom of Bagan and the former royal capital of Mandalay. The ship’s contemporary cabins, wood-paneled piano bar, spa, and Asian-fusion restaurant—combined with its stops in some of Southeast Asia’s most fascinating destinations—would surely have drawn visitors in droves if not for Burma’s longstanding political turmoil. But the brutal military regime that had ruled the country since 1962 prompted many travelers, Americans in particular, to boycott Burma, venturing instead to nearby countries such as Thailand, Cambodia, and Vietnam.

More recently, however, political changes in Burma have started opening up the country after decades of isolation. In November 2010, the military’s loosening grip allowed for the country’s first binding democratic election since 1960, as well as for the release of political prisoners including the opposition leader Daw Aung San Suu Kyi. A series of reforms followed, and by the time President Obama visited the country last year—a first for any U.S. president—Burma was already feeling the effects of its transformation. “We saw big changes in 2012, especially in tourism,” says Khun Aung Zaw Min, my guide aboard Road to Mandalay. “Everyone agrees that the people are warm and friendly and that the country has stayed beautiful. But at the same time, we have been abandoned by the world. People suffered for 50 years with no tourists, no foreign contact, and no access to other countries’ communications and transportation advances. We were left behind.”

Burma hosted a record 1 million tourists in 2012, a figure still dwarfed by the some 20 million people who visit neighboring Thailand annually. But Burma’s tourism is experiencing double-digit growth, with an expected 50 percent boost by the end of this year. Political issues remain—including ethnic strife and sectarian violence in areas such as Meiktila, in central Burma; Kachin in the north; and Rakhine in the west—and rudimentary roads and train systems still create significant logistical challenges for travelers. But international aid efforts are assisting with infrastructure upgrades throughout the country, and, in a sign of things to come, Burma’s tourism initiatives—including new projects from some of the world’s leading luxury brands—are growing in number.

In Yangon, the colonial waterfront city that once served as a key port for the British Empire, Orient-Express’s charming Governor’s Residence has long been the city’s—if not the country’s—only upscale hotel. But new developments are slowly replacing the government-run hotels of the past. Last April, the Hong Kong–based Peninsula Hotels announced plans to build a hotel in the former Burma Railway station, a more than 100-year-old structure located in the city’s center. Later this year, Shangri-La Hotels and Resorts, also of Hong Kong, will launch the Shangri-La Residence, Yangon, a two-tower development situated on the edge of Kandawgyi Lake. The apartment complex—which sits on approximately 4 acres with landscaped gardens and amenities such as a gym, a swimming pool, and tennis courts—will be joined by a Shangri-La Hotel in 2017.

Farther north, Bagan, the legendary golden city with more than 2,000 ancient pagodas, welcomed its first eco-resort, the Bagan Lodge, in April. Located not far from Burma’s most famous temple complex, the 85-room lodge is perhaps the country’s most stylish yet, with spacious tented accommodations, an eight-treatment-room spa, and an open-air restaurant serving both American and Burmese cuisine.

On Burma’s rivers, Road to Mandalay finally has some company—with more to come. This July, Orient-Express launched a second ship, Orcaella (see “The Shipping News,” below), which sails to even more remote areas of the country, including destinations along the narrow Chindwin River. The Los Angeles–based Viking River Cruises, which operates 35 ships on waterways in Europe, Asia, and North Africa, has announced that its new Burma-bound ship, Mandalay, will make its first voyage in January 2014. At the end of 2014, the London-based Sanctuary Retreats will debut Sanctuary Ananda, an all-suite ship that will offer 3- to 11-night trips along the Irrawaddy and Chindwin Rivers.

As promising as Burma’s future as a luxury-travel destination may be, the country’s appeal remains in its still-vibrant past. “Life here has been behind a veil for so many years,” says Edward Piegza, the president and founder of Classic Journeys, an American tour operator that opened an office in Yangon last year. “It’s a thrill to see the country emerge from the harsh realities of its recent past, but the really fascinating thing is that, by having been cut off from so much of the world for so long, cultural identities and ways of life have gone untouched.”

Indeed, as Road to Mandalay glides along the Irrawaddy’s sandy shores, the fleeting scenes of daily life seem from another time. Women wash clothing at the water’s edge while children swim and play. The sound of music and the smell of fire drift in the air as we pass villages brimming with life. The river is a busy thoroughfare with a continual parade of vessels, from bamboo rafts to barges loaded with cargo. Among the local boats, the sleek, white Road to Mandalay stands out like an alien craft.

In Bagan, our modern vessel is dwarfed by the towering pagodas of the ancient Burmese capital. Within the city, craftspeople hawk their colorful wares while Buddhist monks glide silently from temple to temple in a scene that recalls the “gilded city alive with tinkling bells and the swishing sounds of monks’ robes” that Marco Polo described in the 13th century. At Bagan’s Shwesandaw Pagoda, I fall in step with a small crowd climbing the timeworn steps, hoping to catch an aerial glimpse of the city before the sun sinks below the horizon. The journey is steep but quick, and I arrive at the top just in time to see the last drop of orange sunlight disappear behind the Irrawaddy. The afterglow casts a golden hue, illuminating Shwesandaw’s gilded stupa above me and saturating the vibrant-red sandstone pagodas that seem to sprout like colorful mushrooms from the dusty plain before me. Not far away, Road to Mandalay sits anchored in the river’s murky waters, awaiting its next voyage.

In July, Orient-Express launched its second Burmese river cruiser, Orcaella. Named for the species of dolphin that inhabits the Irrawaddy River, the ship features 25 en suite cabins with a capacity of only 50 guests (served by a crew of 40). At 200 feet long, the ship is smaller and nimbler than Road to Mandalay, allowing it to navigate narrow tributaries and rivers for access to some of the country’s most remote destinations. Itineraries (priced from $5,040 per person for a seven-night cruise, including all meals, excursions, transfers, and round-trip domestic airfare) venture through the mountainous jungle along the Chindwin River to reveal rarely visited landmarks such as Mohnyin Thambuddhei Paya, a 14th-century temple filled with more than 500,000 images of Buddha, and the Bodhi Tataung standing Buddha statue, the second tallest statue in the world.

After long days of touring, Orcaella’s passengers can retreat to spacious river-view cabins with floor-to-ceiling sliding glass doors and Juliet balconies, or enjoy a sundowner with fellow guests on the ship’s observation deck. Other shipboard diversions include a lounge, a bar, a swimming pool, a wellness center, and a restaurant serving locally sourced cuisine. -L.K.