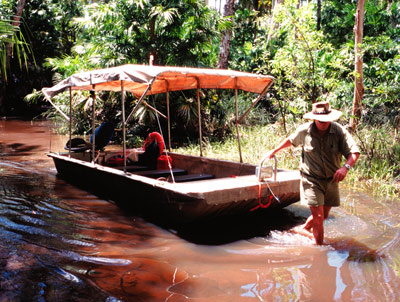 There are no monsoons on the radar as we set out for the wilderness camp of Max Davidson. The remote outpost sits at the tropical north-central edge of Australia, where, in the 1970s, its proprietor made one of the most significant discoveries in the country’s history. The dry sandstone hills of Arnhem Land, Davidson found, are honeycombed with shelters and caves containing some of the world’s oldest rock paintings. The schematic depictions of mythical beasts and mundane characters offer colorful accounts of Aboriginal spiritual life. And Davidson, a grizzled, barrel-chested buffalo hunter worthy of Hemingway or Conrad, is the keeper of this sacred place.

The Aborigines who have inhabited this country for more than 40,000 years believe that Arnhem Land is where life began. For many Australians, however, the vast, isolated tropical wilderness remains a great unknown. Close to 100,000 people a year visit adjacent Kakadu National Park, but fewer than 1,000 enter the Arnhem Land Aboriginal Reserve. Each visitor to the reserve must obtain a permit from the elders of the Aboriginal clan groups, the traditional owners of the territory. The permit tends to be a formality, but it suggests a pact. One does not enter Arnhem Land on a lark. One journeys here as a pilgrim, open to the wildness of the land and the traditions of its peoples.

With the blessing of the Aboriginal elders, Davidson welcomes a few hundred seekers a year to his camp. Ostensibly, they come to see rock paintings, the immense flocks of birds (more than 200 species), slithering crocodiles, and plodding water buffalo. But more important, they come to commune with what Aborigines refer to as “the spirit of place.” The natural and supernatural are entwined in Aboriginal culture, and the sacred paintings are a manifestation of the spirit of Dreamtime, the age of creation. From a modest compound near Mount Borradaile, Davidson is the dream master.

I  first arrived in Arnhem Land aboard a twin-engine Piper from Darwin, the capital of Australia’s sparsely populated Northern Territory. My ultimate objective was to visit the region’s fabled caves, but Mick Hicks, a droll Tasmanian turned northern bushman for Seven Spirit Bay, Arnhem Land’s only modern resort, was determined that I first become oriented to a world wholly unlike my own. Once we completed the half-hour bump-and-shake drive through the eucalyptus forest to the lodge compound, Hicks led six other guests and me through a paperbark swamp—as steamy as any Louisiana bayou in its inner reaches, branches rattling in the wind rising from the nearby saltwater beach. It was the end of the rainy season, in the early days of April, and the thermometer bubbled in the mid- to upper-30s Celsius (approaching 100 F). The swamp was nearly black with tannins, yet the water was pure enough to drink. Red-tailed black cockatoos and rainbow bee-eaters flitted through the branches. From a perch where the swamp opened into dry forest, a blue-winged kookaburra let out its wild jungle cackle.

Hicks halted our troupe and cracked a wicked grin. “Keep an eye out,” he said offhandedly. “Haven’t seen one in a few weeks, but the crocs crawl up here sometimes for an easy meal.” Although salt-water crocodiles have killed only about a dozen people in Australia in the last 20 years, the reptiles are an unnerving presence in the still, dark Arnhem Land swamps. Fortunately, my encounter with great beasts would wait for another day.

In accordance with the lease requirements of the land’s traditional owner, Robert Campbell (an Aborigine whose Scottish grandfather was the local lighthouse keeper), Seven Spirit Bay keeps a low profile in the wilderness. The compound is hundreds of miles off the power grid. Diesel generators run lights, refrigera-tion, and fans, but there is no air-conditioning. Each unit is a separate hexagonal building with overhead fans and louvered blinds on the screened walls. With the blinds open, the tropical night floods in with the hum and buzz of insects, the rustle of bandicoots scurrying over the forest floor, the snap of a wallaby breaking a twig as it bounces down a forest path. As I made my way in the dappled moonlight to my outdoor “bathroom in a garden,” I surprised a wallaby having a nocturnal sip from the toilet. In two bounds, the agile creature disappeared into the night.

The otherworldliness of Seven Spirit Bay was a tonic, awakening my senses and salving my spirit. Over the hours and days, the busy world ebbed away. My jangled nerves grew steady, and knotted muscles released their painful clamps. I bided my time waiting for the perfect emptiness of the warrior, the athlete, and the mystic. Then I was ready.

Max Davidson’s outpost sits at the edge of an alluvial floodplain—a vast savanna transformed into broad wetlands in the rainy season. He greets us at a small airstrip after our short hop southeast from Seven Spirit Bay. We pile into a pontoon boat and speed along the oxbow swamp, or billabong, stirring up flocks of geese and startling crocodiles off their mud banks into the water. He beaches the craft at a sandstone outcrop, and we follow him through an ancient river valley etched in sandstone. We climb to the rocks above the floodplain while Davidson, every few minutes, casually points out a stenciled hand or a turtle sketched in red ocher. He clearly has something bigger in mind.

After 20 minutes of leading us across the high rocks, his khakis dark brown with sweat, Davidson raises his arm and signals above our heads. “There,” our guide whispers. “Up there.” I follow his arm to a sandstone outcrop, 30 feet above, where a fearsome head peers from beneath an overhang. A few of us instinctively begin to scramble the rock wall, but Davidson stops us and points to a hidden trail. Soon we are sheltered from the relentless sun. Arching over our heads, the length of three men stretched head to toe, is the Rainbow Serpent.

Aboriginal legend says the Rainbow Serpent originated in northern Australia at the dawn of the Dreamtime, and created the mountains, rivers, and deserts as it traversed the land. Here, in the Sistine Chapel of Arnhem Land, the majestic creature resides, meticulously drawn with vibrant red and yellow pigments in the classic Aboriginal x-ray style.

Davidson finally speaks, signaling to the wasp nests embedded on the cave ceiling. “The nests can be dated with radio-carbon,” he says of the ancient honeycombs of paper. “Some are on top of the painting, some are below the pigments. That’s how we came up with a date between 20,000 and 30,000 years ago.” The colors are so vivid the creature seems to glow. Davidson explains that it was probably once polychromatic, “but only the red and yellow ochers remain.”

The caves in these hills are riddled with sacred expressions, and after lunch, Davidson takes us to one of his most recent finds, accessible only in high-water season. He refers to it as “the new gallery, turn left at the billabong.” I crawl through one of the narrow apertures to reach the deeper recesses. Large gray bats dangle from the ceiling, enshrouded in their wings. A trickle of water pools on the floor.

The cave has all the marks of human occupation: smudged ceilings around smoke holes; discarded handblown bottles; rusted, crudely worked iron tools. The paintings—a hand, a sailing ship, and schematic x-ray drawings of totemic wallabies, sea turtles, and crocodiles—are even more vivid, if smaller, than their counterparts in the serpent chamber. And as my eyes recover slowly from the incandescent brilliance of the tropical sky, it dawns on me that we are not alone. The hand-dug niches along the sandstone walls are teeming with human bones—skulls and femurs, jawbones and rib cages.

By tradition, when an Aborigine dies, he is exposed to the elements until all flesh has melted away. His bones are then brought back to the place where he was born to return them to their origin. In this cave in the middle of nowhere, the ancient remains and painted walls evoke the Aboriginal spirit of place. In Arnhem Land, we have arrived at the center of the universe, the place of all beginnings, the place of all ends.