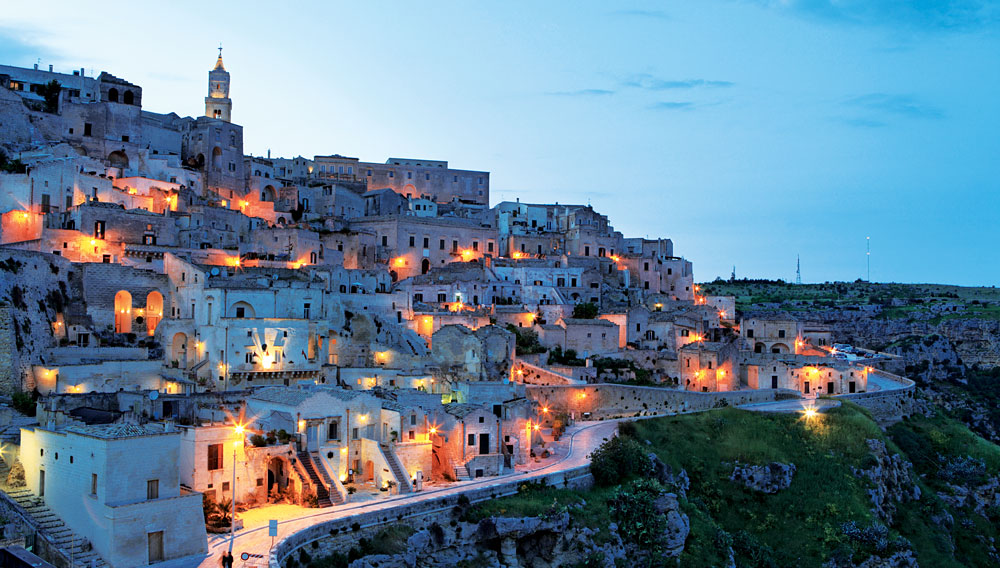 In his memoir Christ Stopped at Eboli, the Italian artist and antifascist activist Carlo Levi told the story of his capture and imprisonment by Mussolini’s government during World War II. Rather than being confined to a jail cell, however, Levi was sentenced to exile in Matera, a godforsaken province in the Italian state of Basilicata that was so impoverished and cut off from the rest of the country that it was considered worse than the alternative. Many of Matera’s residents at the time still lived in caves with the few goats and chickens the fascist regime’s debt collectors had not already confiscated.

The worst of the abject squalor in Levi’s memoir was in the Sassi di Matera, the province’s labyrinthine prehistoric settlement of crudely carved cave dwellings, some of which dated back more than 9,000 years. Residents of the decaying, infested ghetto struggled to survive during the war amid malaria outbreaks and starvation. After the war ended, the Sassi (“stones” in Italian) became a great shame for Italy’s new government, which evacuated the neighborhood in 1952 and planned to demolish it. But the ambitious project never came to fruition because of a lack of funding, and decades later, in 1993, the United Nations intervened and designated the Sassi di Matera as a UNESCO World Heritage Site.

Not until recently, however, has Matera—and Basilicata as a whole—received much recognition from tourists. Nestled in the arch of Italy’s boot, Basilicata is bordered by the better-known Puglia and Campania to the north, and Calabria and the Ionian Sea to the south. The sparsely populated state is home to some of Italy’s most pristine white-sand beaches, and much of the countryside is dedicated to growing Aglianico and Primitivo grapes. In the last few years, the area’s rustic charms have started to catch the attention of affluent Italians and other Europeans, many of whom are transforming historic buildings into elaborate vacation homes and hotels.

Basilicata’s most luxurious transformation, however, is the work of an American: the film director Francis Ford Coppola, whose grandfather immigrated to the United States from the village of Bernalda in the early 20th century. One of the largest villas in Bernalda, a sleepy town about 25 miles south of the Sassi di Matera, Palazzo Margherita was originally constructed in 1892 by the Margherita family—a clan so powerful that they forced other residents with the same surname to change their spelling to Margharita. Coppola purchased the property in 2004 and, following a meticulous restoration, reopened it as a nine-room hotel last year.

From the cobblestone street on which it sits, Palazzo Margherita’s nondescript facade resembles any other on the block, marked only by the number 64 and fronted by an ornate, if rather unremarkable, iron gate. Once visitors pass through the entrance, however, the grandeur of the two-story home unfolds. Hand-painted frescoed ceilings and Carrara-marble floors dating to the villa’s original construction have been faithfully restored under the direction of Jacques Grange. The French designer’s interiors are a blend of rococo and art-deco influences, with vintage Murano chandeliers, Moroccan furnishings, and black-and-white photos of Italian movie stars. Each suite is uniquely designed, and several are named after Coppola family members. The Francis Suite honors the filmmaker’s Tunisian-born grandmother, with turquoise-and-white terra-cotta chevron tiling and a Moroccan lantern chandelier. In the minimalist Roman Suite, sleek art-deco furnishings and a streamlined decor are the result of a collaboration between Grange and Coppola’s son, the director Roman Ford Coppola. In the romantic Sofia Suite, named for Coppola’s director daughter, hand-painted frescoes were inspired by the palazzo’s misty gardens at dawn.

Beyond the guest rooms, fragrant gardens surround a secluded swimming pool, while a grand salon houses a theater that screens films from a library of more than 300 titles. Visitors intent on enjoying the palazzo da solo can order meals cooked in the traditional Basilicata style anywhere on the hotel grounds, from an interior courtyard filled with rose bushes and beds of lavender to the private bar, where guests need only pick up the house phone to summon a butler. For a more social affair, the communal table at Palazzo Margherita’s guest-only eat-in kitchen offers a rustic family-style dining experience adjacent to the hotel’s wood-burning oven, where patrons can mingle with the local staff members as they work.

Indeed, much of the palazzo’s charm lies in its close connection with the village and residents of Bernalda. The hotel sits on Corso Umberto, Bernalda’s central boulevard lined with centuries-old structures, where locals congregate at sidewalk cafés for a glass of amaro lucano and the smell of fresh bread drifts out of neighborhood bakeries. The residents themselves seem to have embraced the palazzo enthusiastically, regularly flocking to the hotel’s Cinecittà Bar, which overlooks the main square and, of course, offers Coppola’s own wine label among its many selections.

If Coppola’s reinvention of Palazzo Margherita is impressive, similar transformations in the Sassi di Matera are downright implausible. Many of the crumbling stacked structures that were carved from the caves over the centuries—and whose roofs serve as passageways that twist up the face of the hillsides—are now trendy restaurants, boutiques, and hotels. The finest example of the redevelopment can be found in La Civita, the oldest part of the Sassi, where the Swedish-Italian hotelier and philanthropist Daniele Kihlgren opened the 18-room Sextantio le Grotte della Civita in 2010.

Outside the hotel, guests have a choice of cafés and boutiques that far outnumber the few establishments in Bernalda. But the danger of losing tradition to gentrification seems no more imminent in Matera, where broad palaz­zos are devoid of souvenir shops. In the surrounding countryside, bucolic country roads free of billboards and cypress-fringed pastures still untouched by development present a side of Italy rarely seen by tourists. Indeed, the state that was once the shame of the country is now a pride-worthy link to its past.