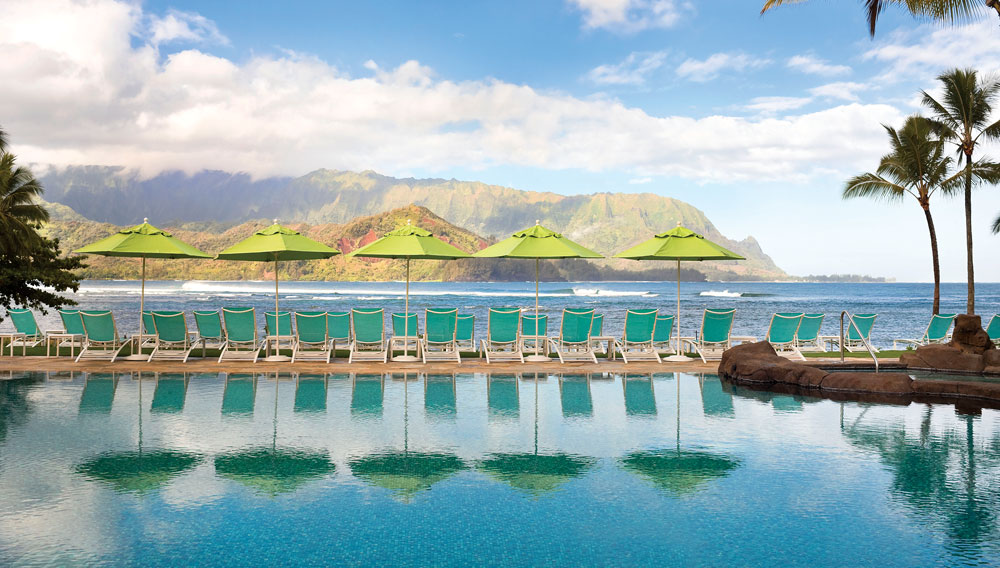 Tropical beverages were the topic of conversation during most of the 90-minute drive from Kauai’s Lihue Airport to the St. Regis Princeville Resort. My driver, John, whose wife had worked at the former Princeville Resort’s pool bar for 14 years, had much to say about the property’s recent changes. “She used to be able to make all the drinks in the blender,” he said. “Now she’s had to learn the 18 St. Regis signature cocktails, which are mixed in a shaker or muddled in a glass.”

The Princeville Resort, which first opened in 1985, was certainly in need of a good shaking up. Originally a Sheraton, the resort became part of parent company Starwood’s Luxury Collection brand in 1993. The property’s breathtaking setting above Hanalei Bay ensured that the hotel remained popular with mainlanders over the years, but after two decades of being the place to stay on Kauai’s splendorous North Shore, the Princeville Resort started to slip. Comments posted in 2008 on the consumer-review travel web site TripAdvisor said the resort was a “great hotel in need of refurbishment” and that it “smells like a nursing home.” Today—following the Princeville Resort’s reopening as a St. Regis last October—the tone has shifted: “Modern, up-to-date, and very comfortable,” a guest from Toronto noted in March; in April, a reviewer from New York posted, “The renovations have renewed the property while maintaining the original feel.”

St. Regis Hotels and Resorts, Starwood’s top-tier brand, closed the Princeville in 2008 and enlisted design firm WATG (acclaimed for its work on such Hawaiian hotels as the Mauna Kea and the Royal Hawaiian) to revive the landmark. But the property’s physical upgrades—and the sophistication of the cocktails at the pool bar—represent only a portion of the Princeville’s transformation. In the days after the reopening, a team of Starwood executives from New York—whom driver John calls the Black Suits—prowled around the resort, looking over the shoulders of employees and enforcing St. Regis standards and protocol. “There was a probationary period for all restaurant staff,” said John. “If they didn’t pass, they were out.”

on my first morning at the St. Regis, I headed out to explore Kauai’s North Shore with Chuck Blay, a local geoscientist. Blay picked me up at the resort and drove us through the adjacent town of Hanalei to the Kalalau Trail at Ha’ena State Park, where a sign instructed hikers to proceed at their own risk. Muddy paths, uneven footing, and precipitous plunges toward the Pacific Ocean necessitate the warning—especially when combined with the trail’s mesmerizing views of the Na Pali coast.

Ha’ena State Park covers just seven acres along the Na Pali coast, where 4,000-foot-high emerald cliffs rise from the turquoise Pacific. The red-dirt hiking trail wends through a thick jungle canopy colored every shade of green. Blay, who spent 25 years teaching and consulting around the world as a sedimentary geologist before establishing a residence in Kauai in 1995, defines nature’s beauty by its degree of color, contrast, and relief. Preserving this park’s beauty—and the culture of nearby Hanalei—is high on his list of priorities. “There’s that saying, ‘If you don’t build it, they won’t come,’ ” he said. “Well, that doesn’t work so well here.”

The day after my hike with Blay, I ordered St. Regis cocktails by the resort’s pool with Jay Furfaro, former president of the Kauai Historical Society. The way Furfaro sees it, the development of the Princeville Resort and surrounding community allowed for the preservation of Hanalei. “Allowing a certain density at Princeville saved Hanalei Bay,” Furfaro said.

Hanalei and Princeville peacefully coexist, but the two communities could not be more different. The latter encompasses golf courses and multimillion-dollar vacation homes, while Hanalei is best known for its hippies. Where Princeville is constantly renovating and moving forward, Hanalei takes you back in time, aging only as the faces of local boys on Quiksilver and Volcom posters are replaced by a younger generation. State Highway 560 bypasses Princeville on its way to downtown Hanalei, where poster-clad surf shops line the road alongside natural-food stores, restaurants with ceiling fans, and dive bars advertising live music and world-famous mai tais.

Contrasting sharply with Hanalei’s hippie culture, the exclusivity of the Princeville community owes much to the area’s pedigree. “Princeville’s history as privately held land is significant to its success,” said Furfaro. Five years after King Kamehameha III enacted the Great Mahale (which allowed foreigners to buy land) in 1848, British magistrate and confidant of the royal family Robert Crichton Wyllie purchased a modest coffee plantation on the North Shore. Wyllie gradually expanded the plantation, which he named Princeville after King Kamehameha IV’s son Prince Albert, and ultimately held 11,000 continuous acres. For the next century the land was used by various owners, including Wyllie and his descendants, to raise cattle and produce coffee, sugar, and rice. In 1968, the Eagle County Development Corp., known for its work in Vail, Colo., began repurposing the land as a master-planned community. Of the plantation’s 11,000 acres, 9,000 became the Princeville at Hanalei, a high-end development that included private homes and, in the project’s third phase, the Princeville Resort.

The resort’s main building—which sits at the junction of Princeville and Hanalei—was constructed in compliance with Kauai’s height ordinance of 45 feet (about as tall as a mature coconut tree). The structure descends a terraced cliff to the beach below, where on one side is Princeville at Hanalei and on the other, a quick walk or swim from the resort’s beach, is Hanalei.

The views from the St. Regis Princeville remain the property’s biggest selling point. Resort guests and locals alike rush nightly to the many balconies and ocean-view restaurants to witness the sun setting over Hanalei Bay. From the sky-high lobby level and the St. Regis Bar, the ocean appears rippled and unending, framed by the exotically green Na Pali range. Misty clouds hang over the tallest peaks, while red rays of sunlight reflect on the ocean’s surface.

At the piko, or center, of the St. Regis Princeville, WATG hung a 4,220-piece Murano glass chandelier designed to reflect a waterfall that can be seen from the lobby level. In the guest rooms and suites, the designers retained the basic configurations but replaced almost everything within: All-new furnishings, linens, and high-tech amenities have refreshed the accommodations’ look and feel. The resort’s renovation also included the addition of a 10,000-square-foot spa and a restaurant by French chef Jean-Georges Vongerichten. And the Princeville at Hanalei’s Robert Trent Jones Jr.–designed Makai Golf Course—one of two courses at the community, both of which are open to St. Regis guests—completed a substantial renovation in conjunction with the hotel’s.

Still, a large part of what makes the St. Regis Princeville Resort a success is that one thing has not changed: Though newly polished, the resort staff remains authentically friendly—and largely local. Lynn, who serves breakfast at the resort’s Makana Terrace restaurant, also runs a surf school in Hanalei. Tom Hamilton, another server at the restaurant, is the father of local hero and professional surfer Bethany Hamilton, who became famous after surviving a shark attack in 2003. Everywhere at the St. Regis Princeville people pass each other with smiles or shaka signs—as they do down in Hanalei.

“Hanalei will always be Hanalei,” driver John said on our way to the airport on my last day. He admitted, however, that the Princeville’s reopening as a St. Regis certainly had an effect on the hippie town. “I hear the boutiques are doing quite well.”