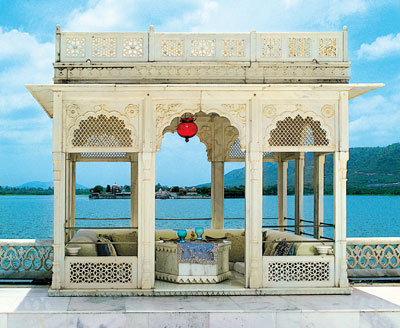 The waves of Lake Pichola lap against the side of the Gangaur, a replica of the 18th-century barge that carried Udaipur’s royal Singh family between their City Palace on the eastern shore and Lake Palace in the middle of Pichola. The Gangaur glows in the afternoon sun, its dazzling red sails, heavily threaded with gold, evoking a vibrant, ever-changing sunset. My butler, Viji, sits close to me on the vessel, waiting to address any of my requests. At this moment, however, floating on Pichola within view of the Lake Palace and with Rajasthan’s Aravalli mountains in the distance, I can think of nothing more to ask for.

But Viji, a graduate of the Taj Hotels Resorts and Palaces school for butlers, is diligent. When I first arrived at the Lake Palace, one of several properties owned by Indian royalty that the Mumbai-based Taj group operates as hotels, she unpacked and ironed my clothes and polished my shoes. During my stay, she prepares my breakfasts and does just about anything else that would require the slightest extra effort for me to do. On the Gangaur, I finally muster the motivation to ask for masala, a rich combination of cardamom, cinnamon, cream, and black Assam tea. She is gone for a short time, and then brings back a formal tea service of gleaming silver, freshly starched white napkins, and, on another silver platter, vegetable samosas and tea biscuits. I recall a story I was told the previous day about the princess consort of Morocco, who, after a recent private jet trip to a few Taj hotels, was so impressed with her butler that she took him back home with her.

Relating to the life of royalty is rarely difficult at the Lake Palace, a brilliant white edifice that appears to float in the middle of Pichola. (The hotel rests atop a rock outcropping.) Located in the northern India state of Rajasthan, the property is one of many optional stops on Taj’s palace-tour experience, which includes private jet transfers from hotel to hotel, butlers who remain with guests for the duration of their travels, evenings in suites where royal families once stayed, and spa treatments that were designed originally for maharajas. Still, the authenticity of the tours lies less in the service and private jets and more in the palaces themselves, all of which, slowly but surely, Taj is restoring to their original grandeur.

“We were given a handful of heirloom jewels, each with different facets of history and architectural beauty,” says Taj’s managing director, Raymond Bickson. “We were asked to polish each and add new ones; we have done that, and will continue.”

Throughout the process, which for the Lake Palace began in 1971, Taj executives have maintained close relations with the royal families, who still own—and in many cases still live at—the properties. Built in 1746 for the Maharana Jagat Singh II, the Lake Palace today serves as the Singh family’s summer home. While in residence on the lake, members of the royal family oversee some of the restoration work, which includes a yearly cleaning of the white marble facade and the retouching of stonework, colored glass, and a semiprecious jewel mosaic in the lobby. (Taj claims that the workers restoring the lobby mosaic are descendants of craftsmen who refurbished the Singh family’s nearby Jagmandir Palace a century ago.)

A similarly deliberate, systematic restoration process is ongoing at each of Taj’s palace properties. In Jaipur, a dry desert city 250 miles northeast of Udaipur in Rajasthan, the company has been refurbishing the Rambagh Palace hotel for 34 years.

Built in 1835 as a modest, four-room residence for the queen of Jaipur’s favorite female servant, the Rambagh became a royal guesthouse and hunting lodge in the late 1800s, when elephants, leopards, and panthers roamed the surrounding desert. When Sawai Man Singh II ascended the throne of Jaipur in 1922, he chose to live at the Rambagh, which remained his private home until he converted it into a hotel in 1957. (Taj began managing the property in 1972.)

Taj’s restoration of the Rambagh Palace takes place under the watchful eye of Rajmata Gayatri Devi, the third wife and now-87-year-old widow of Sawai Man Singh II. Paintings and photos of the Rajmata, who was an avid tennis player and polo enthusiast, appear throughout the property, where she still lives in a private residence. In the Suvarna Mahal, the Rambagh’s elegant formal dining room, a floor-to-ceiling oil portrait shows the tall, elegant Rajmata in her 20s—about the time Vogue named her one of the 10 most beautiful women in the world—wearing a floor-length ocher sari.

“The Rajmata is deeply loved and respected here—and she has the final say on many projects,” says Gaurav Pokhriyal, general manager of the Rambagh Palace. “We wanted to move the Polo Bar from where it was originally to a larger area, where there would be more room and a greater garden view. But she wanted the Polo Bar to be where it was originally; she felt that history could not be moved elsewhere. So we are in the process of doing as she suggested: The Polo Bar will be renovated in the same place it always was.”

In Gwalior, in the north-central state of Madhya Pradesh, a 31-year-old princess is playing an essential role in the restoration of her family’s palace. Set amid nine acres of gardens and fountains, the Usha Kiran is a small palace, originally built in 1886 by the Scindias, the royal family of Gwalior since the 18th century, to host England’s Queen Victoria and her entourage. Today, as a hotel, the palace encompasses 38 guest rooms and suites, each painted a different color—from deep vermilion to lemon yellow—with matching, diaphanous Chanderi silk curtains around the beds and on the windows.

Overseeing the restoration of Usha Kiran’s rooms, gardens, and fountains is the young Maharani Priyadarshini Raje Scindia of Gwalior. Her husband, Crown Prince Jyotiraditya Scindia, holds degrees from Stanford and Harvard and serves as an elected official in the Indian Parliament. “I believe the restoration of the Usha Kiran will be a long-term project,” says the maharani, a petite, dark, lovely woman who wears tiny bells in her sari that tinkle ever so softly when she moves. “I love to come here, knowing that a part of my husband’s family history and that of India resides here. Our children love it here, too, partly because of the mongooses who live on the grounds.”

The princess, her husband, and their two children travel to Usha Kiran with an entourage that includes the children’s nannies, housekeepers, a driver, her father-in-law, and, she mentions with mock frustration, her mother-in-law. But the life of Indian royalty is not as well-staffed and financially free as it once was. In 1971, by decree of then prime minister Indira Ghandi, the government stripped the country’s royal families of their powers and privy purses, the taxpayer-supplied grants that nearly 400 princely states had been collecting since agreeing to join unified India in 1947. The abolishment of this privilege prompted some royals, especially in Rajasthan, to turn to tourism as a source of income.

In Rajasthan’s Marwar-Jodhpur region, Maharaja Gaj Singh II ascended the throne in 1952 at the age of 4, after his father, Maharaja Hanwant Singh, died in a plane crash. Following the 1971 decree, Singh II began converting his family’s properties into hotels, including their main residence, the Umaid Bhawan Palace in the Blue City of Jodhpur.

Today, the maharaja lives with his family in a private section of the Umaid Bhawan, which was named after his grandfather, Maharaja Umaid Singh. The palace, which Umaid Singh commissioned in 1929, is a 215,000-square-foot marvel of golden yellow Chittar sandstone that presents a striking contrast to Jodhpur’s pale blue buildings (the source of the city’s nickname). Built without cement—more than 3,000 workers constructed the behemoth using interlocking blocks—the palace combines the diverse architectural styles of Indo-Saracen (itself a blend of Hindu and Islamic styles) and Western Art Deco.

The Umaid Bhawan Palace sits amid 26 acres of gardens on Chittar Hill, overlooking Jodhpur and the Mehrangarh Fort, a 15th-century citadel that Singh II converted into a cultural museum. Guests of the hotel can arrange private dinners at the fort, or they may dine within the Umaid Bhawan’s baradari, a white marble– pillared pavilion where members of the royal family frequently join visitors on colorful silk floor cushions for multicourse Rajasthani meals.

The Singhs are working with Taj on the Umaid Bhawan’s restoration, which has included the retouching of the palace’s marble squash courts, 105-foot-tall rotunda dome, and subterranean swimming pool. The maharaja’s only son, Crown Prince Shivraj Singh, was overseeing the project until nearly two years ago, when he suffered a near-fatal polo accident that left him in a coma for a month. “I have taken more of a personal hand in these restorations since my son’s accident,” says Gaj Singh II, whom residents of Jodhpur refer to affectionately as Bapji, or father. “I want there to be a spirit to this restoration that will be in keeping with the original work. That is why we go inch-by-inch, section-by-section. We want the spirit of history to reverberate within the walls, for all to see and feel. We want there to be a continuity here, from father to son, from past to future.”