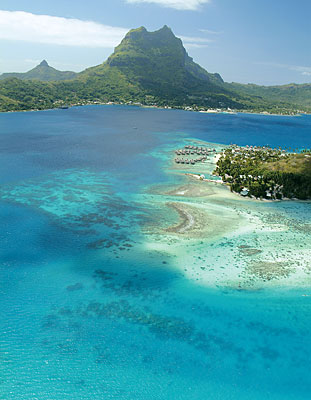 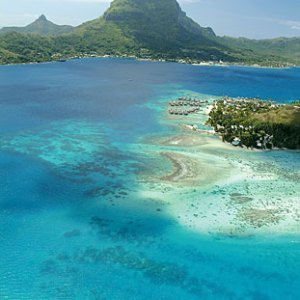 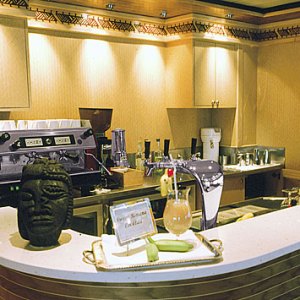 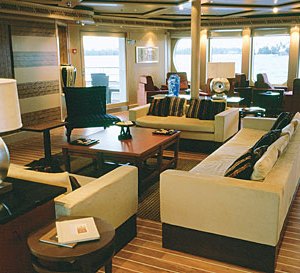 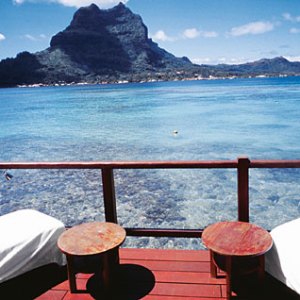 The first afternoon aboard the megayacht Ti’a Moana, I hop a tender to one of the deserted islets that ring the volcanic island of Bora-Bora. I snorkel through schools of electric blue parrot fish and silver bream in a turquoise cove, then wade ashore past undulating sea cucumbers and black-spined urchins. Pulling on reef shoes, I tramp across a moonscape of sea-hammered coral and shells to the outer shore, where the Pacific curls in long white breakers across the reef, gnawing like a beast at this tiny motu, as Polynesians call these coral atolls.

The universe suddenly seems very large and the spot where I stand quite small. In French Polynesia, land is but a specklike exception to water. The reef defines a frontier between a vast, uncaring ocean on one side and a still and limpid lagoon on the other. A lone channel penetrates this aquatic realm, zigzagging through strands of sandbar and coral reef, and presenting passage for the 226-foot Ti’a Moana.

“I can navigate by color,” says Captain Bertrand Beaumont from his vessel’s bridge, where we meet following my day’s diversions. “Bright turquoise means danger, teal is safe but shallow, azure means at least 25 meters.” Beaumont has sailed the Caribbean, the Mediterranean, and the North Sea, but he considers Polynesia’s waters unique. “Never have I seen such a range of blues,” he says.

Ti’a Moana, with a draft of less than 8 feet, was built to ply those blues. With Beaumont at the helm, she glides through waters where larger vessels dare not go. (The day I boarded in Bora-Bora, two massive cruise ships sat in the deep channel; I never saw them again.) Apart from the overnight passages between Bora-Bora, Huahine, and Raiatea-Taha’a, our seven-day, six-night cruise aboard Ti’a Moana unfolds in the intimate lagoons of the Leeward Islands.

On board Ti’a Moana, our cruise approaches the intimacy afforded by a private yacht. The five-deck vessel’s restaurant, two bars, and library serve a mere 30 cabins—each about 170 square feet and outfitted with a panoramic window and LCD TV. Many of the 38 crew members are Frenchmen who trained at Paris hotels and Riviera resorts. They abandoned their homeland for the South Seas, a place the ship’s Polynesian crew members have spent their lives exploring.

Gaëtan and Patrick, our tender drivers, wed impassive cool to pilot skills learned as boys on the coves of the Raiatea-Taha’a lagoon. Inscrutable behind their wraparound shades, they know the best place to drift-snorkel past a forest of red, blue, and purple coral, and how to thread the shallows to a hidden beach, where I receive an impromptu Polynesian dance lesson from the ship’s laundress.

One afternoon, Gaëtan and Patrick ferry all of Ti’a Moana’s passengers to a private motu off Taha’a. The family who owns the island prepares for us a feast of coconut bread, roasted taro root, breadfruit, pork, mullet, and chicken with greens and red ginger—all cooked in a deep oven dug into the sand. The patriarch shows us how to make poisson cru, smacking his lips as he stirs lime juice and coconut milk into a vat of raw fish and onion.Our onboard dishes are no less authentic: tuna carpaccio so fresh it seems to quiver, grilled white tuna with Tahitian vanilla froth, chicken stewed in coconut milk, red ginger soup, and vanilla crème brûlée speckled with freshly scraped seeds. Fishermen tie up on the stern with deliveries for our chef—yellowfin and white tuna, a massive moonfish, a string of reef trout—and, when we make port, our crew loads Ti’a Moana with scores of ladyfinger bananas, coconuts, and fat watermelons.

With T’a Moana anchored off Raiatea, the yacht’s guest liaison, Christophe Castagnoli, takes a group of us ashore to the temple site of Taputapuatea Marae. Descended from the chiefs of Tahiti on his mother’s side, Castagnoli can trace his ancestry to the most daring and capable seafarers in human history. At a time when Europeans were hovering close to their own shores, the ancestors of the Polynesians were voyaging hundreds, sometimes thousands, of miles. These pioneers, working east from Papua New Guinea, settled present-day French Polynesia sometime between 200 B.C. and A.D. 400. Their descendants colonized New Zealand to the south, Easter Island to the east, and Hawaii to the north.

Dedicated to Oro, the god of war, Taputapuatea Marae was the religious and political center of the theocratic Maori culture when the first European explorers arrived in the mid-18th century. English missionaries followed in the late 1700s and converted the entire Polynesian population to Christianity within 25 years, a cultural transformation that relegated Taputapuatea to an archaeological curiosity.

Castagnoli leads us across barren plazas of volcanic stone to crumbling double walls made of coral slabs. “When they excavated,” he says softly, “the space between the walls was filled with skulls from sacrifices.” Polynesian chieftains from as far away as New Zealand voyaged to the marae for ceremonies, and pilgrims continue to make the journey today. At small altars, I find offerings of carvings, stones, shells, coins, fruits, and flower garlands gradually turning to dust.

Legend holds that the great colonizing migrations were staged not far from Taputapuatea at the mouth of the Faaroa, Polynesia’s only navigable river. That same afternoon, we set out in kayaks to paddle up the muddy stream to a private botanical garden with towering Polynesian chestnuts, stands of red and gold ginger, and thickets of porcelain flower shrubs said to be the most expensive cut flowers in the world. Vanilla orchids snake around the trunks of shade trees. Tugging gently on the blossoms, Castagnoli shows us how to hand-pollinate each bloom to produce the plant’s coveted extract.

We do not spend our entire week in remote jungles or on moorings off deserted islands. Since Ti’a Moana went into service in May 2004, the yacht has been making a stir when it docks at the quay of sleepy Fare on Huahine (where I take an excursion to see the island’s blue-eyed eels) and the recently modernized waterfront of Uturoa on Raiatea. Uturoa, the island’s largest town, crouches beneath a 965-foot peak, and a handful of us, packing thermoses of rum punch mixed by the ship’s bartenders, climb to the summit for the sweeping view of the blue lagoons and serrated peaks we have encountered during our weeklong journey aboard Ti’a Moana.

Our South Seas cruise has not included glitzy floor shows or casinos. But nights on Ti’a Moana’s upper deck, spent locating the Southern Cross and watching for shooting stars in the galactic expanse, have hardly been dull. And with her access to the tiny Polynesian motu and lagoons, Ti’a Moana has exposed us to a new universe.