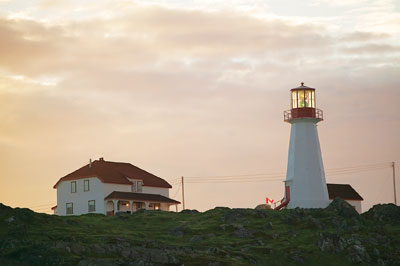 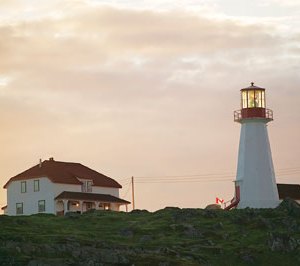 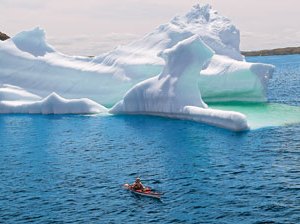 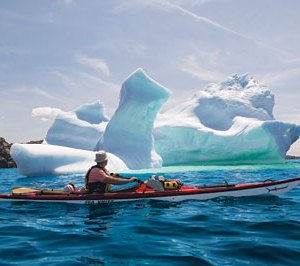 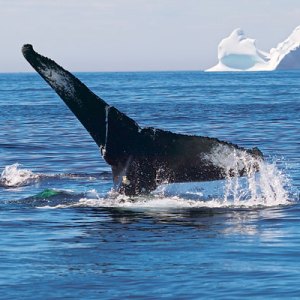 Stare long enough at the dark waters of Iceberg Alley off the northern coast of Newfoundland, and the swells and whitecaps begin to look like whales. On this late-June morning, as I sit in a kayak, bobbing like flotsam in the North Atlantic, these apparitions will have to suffice, for the real whales, dozens of which were visible from shore the previous evening, are not complying; not a single humpback spouts or even breaks the water’s surface.

“I don’t see whales, so we’ll explore the nooks and crannies,” says Nelson Pilgrim, a 54-year-old former school administrator who took up kayaking eight years ago and has led visitors along this jagged coastline for the last three. As the only kayak guide in this northernmost part of Newfoundland, he works with Explore Newfoundland, the active-travel branch of a local company, Linkum Tours. Nelson, who grew up in the area and who as a youth spent all of his spare time working on his father’s fishing boat, is a highly educated outdoorsman who nevertheless cannot understand why people want to come here. I answer with my own reasons for visiting Newfoundland: Its remoteness and isolation are rare and, for some, alluring commodities; the rocky, dramatic vistas are spectacular; the local history, from Viking raiders of a past millennium to the disastrous codfishing moratorium of the last decade, is provocative; the people are renowned for their hospitality and warmth; and here I have found unique accommodations at an island lighthouse, the Quirpon Lighthouse Inn. Finally, Newfoundland—its coastline etched with fjords, caves, and coves, and its waters teeming with whales and icebergs—is said to be one of the world’s best places for sea kayaking. “Really?” asks Nelson. “I have never heard that.”

Such an admission is perplexing. In a single day on the water, each nook and cranny of Quirpon Island (pronounced kar-poon), the home base for this expedition, yields a sight that gives pause. We paddle in from the open water to a 200-foot wall of black igneous rock that blocks the sun and serves as a nesting ground for a colony of white kittiwakes, which circle in scores of lazy orbits close to the ledges that hold their youngsters. We move on to enter a sheltered bay, which has an alternate exit that evokes a scene from The Lord of the Rings. Here, drifting except for the strokes taken to avoid rocks, we let the tidal wash carry our boats through a narrow passage between two towering cliffs, and in a whoosh we shoot along the swift current from the cut, back into the open sea. In another cove, a lone cabin stands where there was once a fishing settlement. (click here to see  “Harboring a Cold-Blooded Killer,”)

Meanwhile, our unsuccessful search for whales continues, and Nelson compensates by spinning fish tales. Once, while kayaking, he encountered gridlock: “hundreds of humpbacks—so many of them feeding, I had to weave around whales all the way back to Quirpon Island.” He tells this story as we glide into a cove to visit a family of sea otters, which, alas, are not at home.

Despite the disappointment of missing some wildlife, five hours in the kayak pass as quickly as a coffee break, and back at the lighthouse, sitting on rocks and sipping beers, we spy the whales that had eluded us all day. Plumes spout from humpbacks just offshore, and minkes surface and dive repeatedly. The schools of fish that attract the whales must have been swimming elsewhere until now. Nelson offers to take me out again immediately, but I decline. As kayaking days go, this one already is a keeper, with or without whales. My guide’s incredulity notwithstanding, this region merits its reputation.

Newfoundland’s northern peninsula has attracted visitors for a thousand years, albeit infrequently and in small numbers. L’Anse aux Meadows, at the tip, is the site of the first known Viking settlement in North America. Along this portion of Newfoundland’s 6,000-mile coastline, the cold Labrador Current, carrying icebergs south, meets the warm Gulf Stream, churning up the marine tidbits that entice schools of capelin and other fish, which in turn bring pods of whales. At the Quirpon Lighthouse Inn, which is owned by Linkum Tours, you can spot whales through the bedroom windows of one of the inn’s two buildings, or from a glassed-in observation hut, which is outfitted with telescopes and is a welcoming refuge for wildlife-viewing during a gale, or for taking in the early-summer’s 10 pm sunsets.

Although situated on the edge of civilization, the lighthouse is a hubbub of activity. The inn is officially open from May through September and, weather permitting, sometimes into October, but the safest window of opportunity for kayaking is June through August. Ed English, the inn’s owner, says it can be possible to kayak in May, but pack ice may still linger; September and October bring the northeast winds—not good for kayakers but fine for storm watchers.

Hiking is popular on the island, which is about four miles long and has a challenging topography. One couple, returning to the lighthouse after scaling the island’s highest point, brings tales of near-death experiences in the tuckamore thickets and of a particularly frightening encounter: “We were almost attacked by sea otters!” So that is where that otter family went: to stalk unsuspecting New Yorkers.

I experienced my own harrowing trek en route to Quirpon Island, when a nor’easter raged through the area. “Just mist,” said a local grandmother, as I stood on the mainland dock, considering my options. Squinting through the “mist” from under the scrunched hood of a waterproof suit, I tried to gauge the chances that our small, open motorboat would successfully navigate the three-mile distance around the far tip of the island to the lighthouse. However, the skipper chose a shorter course, simply blasting through the chop to the island’s nearest landing point and leaving us to hike the three miles through bogs, tuckamore thickets, and the storm.

While hiking—for recreation or out of necessity—and kayaking are the primary activities among the inn’s guests, much time this week is spent speculating about the dearth of icebergs this season, while tracking the lone berg in the neighborhood. For more than two months, the iceberg had been lodged near the island, but it had broken free recently and was now barely visible several miles to the south—too far to reach by kayak. Nelson enlists the lighthouse keeper to take us to it in his fishing boat. The visible portion of the iceberg, which I had guessed would be the size and shape of a tractor trailer, turns out to be an altogether different formation, resembling a monstrous crown suitable for Poseidon (or Njord, his Norse equivalent). Its four pinnacles rise at least 60 feet, and as we circle closely, cod-size pieces break off from underneath. The crew fishes them out of the water to take back to the inn, where they will hack them up and use them in water pitchers at mealtime. (Icebergs break off of glaciers, which are formed from frozen fresh water.) On the return trip, a school of dolphins (“squid hounds” in the local vernacular) toys with us, jumping around the boat and zooming underneath. Nelson, who has seen “literally thousands of icebergs,” also points out a seal. It dives. I miss it.

Whale sightings are reported at the following day’s breakfast, and one guest claims the humpbacks were bellowing loud enough to awaken him. (Salty storytelling is a skill evidently not exclusive to the locals.) Nelson has checked the weather and says we can go kayaking again, so I dash to my room to dress for another day of summer sport in Newfoundland. Following instructions, I don four layers—bathing suit, wet suit, fleece shirt, paddling jacket—plus life vest, rubber skirt to seal myself into the boat, neoprene socks, waterproof shoes, hat, and pogies to keep hands warm, and hasten down to the stony shore. Nelson shoves me off and follows in his own craft, and we skim swiftly out of the cove and into the open sea.

The water is choppier today, and we steer a course to surf the powerful swells. In preparation for this trip, I had practiced a wet exit on a hot summer day on a placid suburban river—on another planet, it seems; it would be useful to know this safety measure if, when an orca jumped across my bow, I were to tip over in shock. Now, with the kayak as the sole joinery between body and current, the ocean’s pull is palpable, and I savor the speed and the roll from crest to trough, heedless of how much paddling it will take to return. “Now this is sea kayaking,” Nelson shouts from the crest of another wave.

Between swells, we feel obligated to stop and look at the horizon, just in case a whale should wander by. “A beluga came up beside me once, and stayed alongside my kayak and wouldn’t go away,” says Nelson. “It got tiresome. Who wants to spend 20 minutes staring at a beluga?”