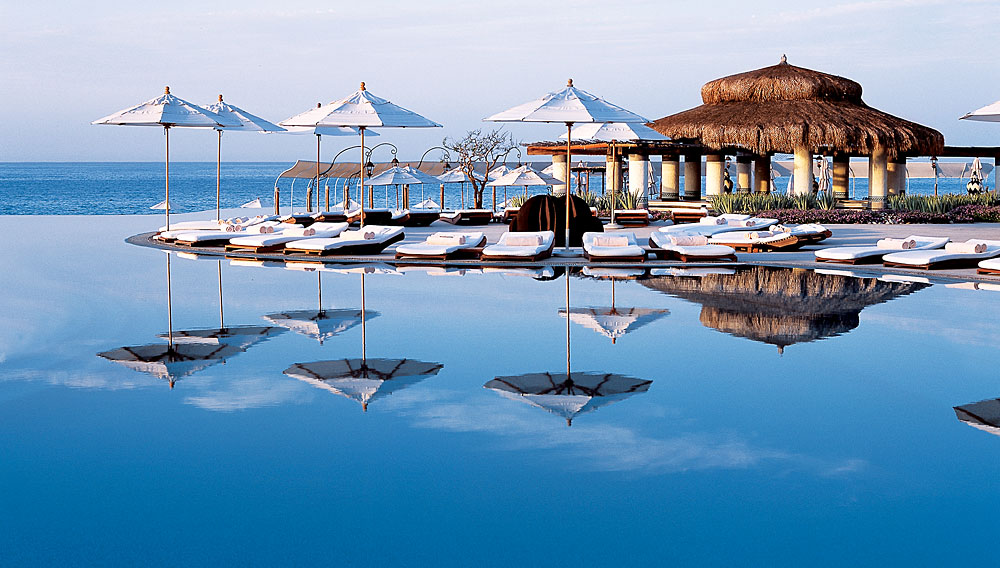 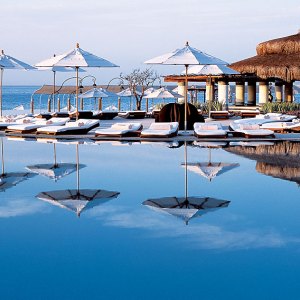 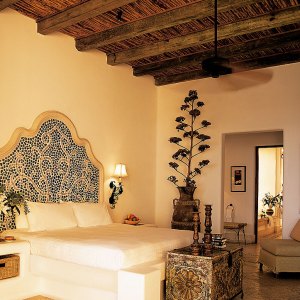 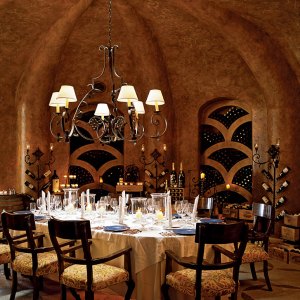 Swine flu, drug wars, and a down economy have discouraged many would-be visitors to Mexico—especially those in search of a wellness experience. But few settings could be more therapeutic than the courtyard relaxation area at Las Ventanas al Paraíso’s spa, where the resonance of crystal bowls rises above the sound of nearby surf. The courtyard musical-therapy ritual—in which an attendant rubs a tube along the rims of bowls to produce tones akin to blowing into beer bottles—can serve as a prelude to your massage, as well as a prescription for your health: Such practices, claims spa director Brigitte Ciceron, have even been used to treat cancer patients. Its purported healing abilities aside, the process certainly inspires a sense of well-being, as does most everything about a vacation at Las Ventanas.

Set on a broad sandy beach near the tip of Baja California, Las Ventanas appears at first as a quaint village, a collection of white stucco structures situated around courtyards and gardens that descend a hill toward the Sea of Cortés. Awnings made from bundled branches filter the desert sun, which seeps through to illuminate stone paths, pebble mosaics, iron sculptures of flora and fauna, and decorative pools. The paths lead to the property’s 71 suites, each of which is equipped with a telescope for whale watching and stargazing. Daytime views offer a palette of beige and blue, with sea, sand, sky, and swimming pools visible from nearly every vantage.

Here, as elsewhere in Mexico, the views these days are often void of tourists. The beach in front of Las Ventanas is virtually vacant, aside from a few guests enjoying novels or the latest news on Kindles (wireless reading devices supplied by the resort) under the shade of umbrellas. And while the news from Mexico has not been good of late, the U.S. Consulate in Cabo San Lucas had reported no cases of swine flu in the city as of midsummer. (Nearby San José del Cabo had five confirmed cases, one of which originated in New York.)

Should you feel a bit under the weather at Las Ventanas, a trip to the spa’s courtyard is in order. Those who prefer to self-medicate should just lie back in one of the resort’s beach hammocks and blow into a bottle of Pacifico.

On a Sea of Cortés beach in Los Cabos, Mexico.

Each of the 71 suites comes with butler service; the 3,900-square-foot Spa Suites include treatment areas with steam rooms and Vichy showers.

Mexico meets the Mediterranean in the seafood-centric cuisine at four restaurants. Dinners can also be served under a private palapa on the beach.

After a courtyard music ceremony, retire to one of eight rooms for therapies that incorporate your choice of aromatic oils.

Tequila lessons in the bar, cooking demonstrations in the garden, golfing on the neighboring Cabo Real course, fishing and snorkeling in the Sea of Cortés, whale watching on a 110-foot yacht, and swimming in multiple pools.