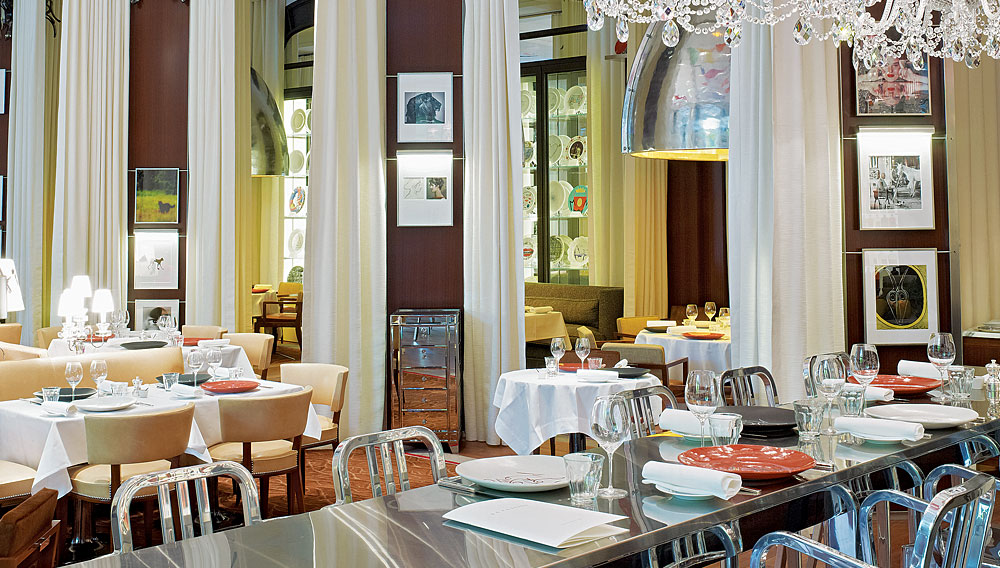 Le Royal Monceau in Paris has been a rendezvous for artists and writers since the hotel opened in 1928. Even its recent reinvention started as a kind of performance-art piece: In 2008, the property hosted an all-night “demolition party” where the few hundred guests were handed Champagne and sledgehammers and invited to wreck the Beaux Arts building. Philippe Starck, enfant terrible of the design world, then came in to clean up the mess.

Reopened this past October, Le Royal Monceau, Raffles Paris, is a now a chic city retreat with Starck’s signature touches throughout. His playful aesthetic predominates in the 85 guest rooms, 54 suites, and 10 apartments, where dressing rooms resemble French couture salons and the designer’s Empire chairs are repurposed as bedside tables.

Amenities at Le Royal Monceau, which is located near the Champs-Élysées, include a ruby-red cigar bar, a Clarins spa, an art concierge, an art library, and a gallery that opened with a Jean-Michel Basquiat show. A 3-D screening room—a first for a Paris hotel—is expected to draw the film crowd, and commissioned works are on display throughout the property. A massive fresco by Stéphane Calais hovers above La Cuisine, a plush French restaurant helmed by executive chef Laurent André and featuring sweets by Pierre Hermé, enfant terrible of the macaroon. Le Royal Monceau, Raffles Paris,+331.42.99.88.00, www.raffles.com