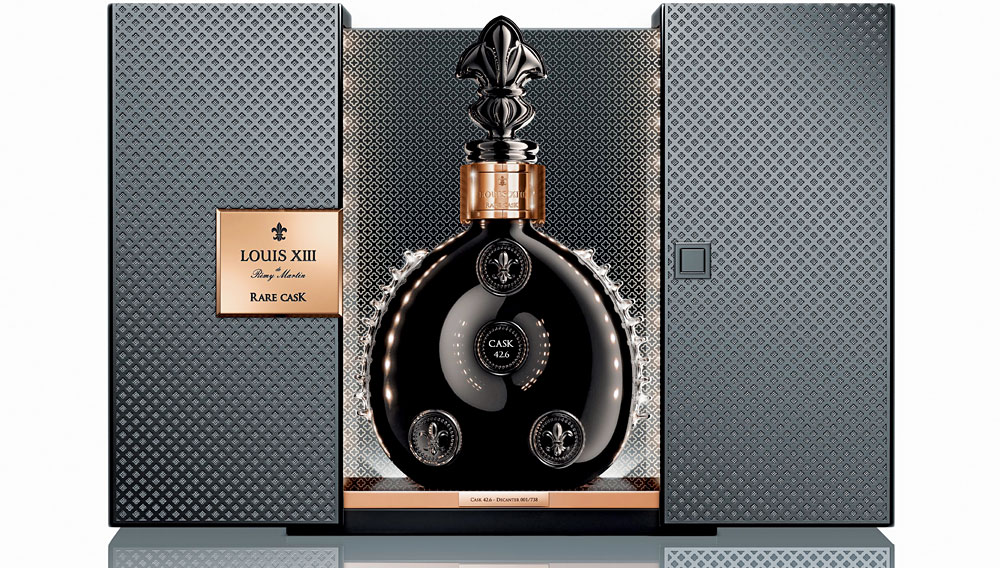 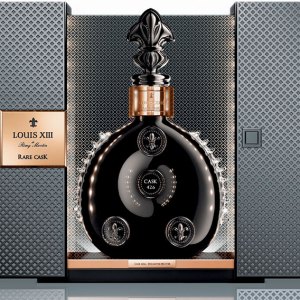 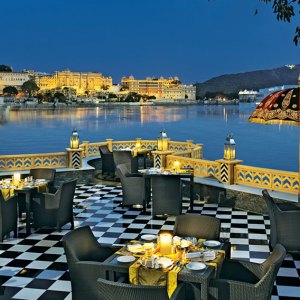 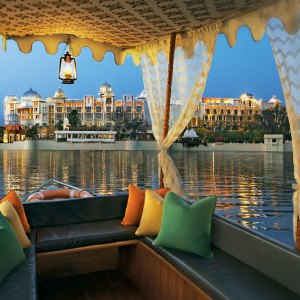 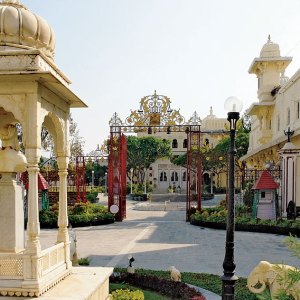 A towering guard in a green-and-gold turban lifted an umbrella to shield me from the sun as we stepped from the launch onto the dock. We walked up a red carpet to the Leela Palace in the city of Udaipur, in the northwestern Indian state of Rajasthan. At the hotel, a harmonium-and-tabla duo played the hypnotic, incantatory music of Raj­asthan while rose petals fluttered down from an unseen balcony. I was in the heart of the ancient Mewar kingdom, in a valley that is the closest I will ever get to Shangri-la.

The hotel, a modern structure, sits on the shore of Lake Pichola, which members of the Mewar dynasty created in the 14th century as their private keep. They built palaces along its shores and one on an island in the middle.

The occasion of the visit to Udaipur was the ceremonial unveiling of a Louis XIII Rare Cask Cognac. It is only the second such cask in the 139-year history of Louis XIII, so the Cognac’s maker, Rémy Martin, pulled out all the stops.

“Louis XIII is the purest expression of the greatest eaux-de-vie in the cellars of Rémy Martin,” says the cellar master, Pierrette Trichet. This is quite a statement about a Cognac from a house with more than 200,000 barrels in its cellars. But Trichet is the final authority on the taste of every bottle of Cognac produced by this 289-year-old company.

During the distilling season, she samples thousands of eaux-de-vie submitted by small-vineyard distillers throughout Petite and Grande Champagne, the top two of Cognac’s six subregions. The raw spirits that pass muster go into barrels in the Rémy Martin cellars for the long, repetitive process of aging and blending that creates the amber nectar called Cognac. Even Rémy Martin’s basic VSOP is blended from about 100 eaux-de-vie that have spent four to 15 years in wood. Rémy Martin creates its premium XO Excellence from more than 300 eaux-de-vie aged 10 to 37 years.

But as with so many things in life, patience pays off. Louis XIII, which was first created in 1874 and registered under the name Très Grande Champagne—Age Unknown, is conjured from about 1,200 eaux-de-vie, all of which are at least 40 years old; some are more than 100 years old. The spirits are blended and aged in an old-fashioned oblong barrel known as a tierçon. It is said that fine Cognac tastes like wine that has gone to heaven. By that measure, Louis XIII is wine that has achieved sainthood.

Since the launch of Louis XIII, four generations of cellar masters have kept its profile constant. Only under the stewardship of Trichet has Rémy Martin released rare casks. As she blends from the old stocks of eaux-de-vie to bring the casks closer and closer to the Louis XIII profile, she keeps a sort of Platonic ideal in her mind—and in her taste buds. She was surprised by one cask in 2004. The taste was definitely Louis XIII, but it had a higher-than-normal alcohol content—43.8 percent instead of 40—and emphasized certain autumnal aromas more than the other casks. Should she suppress its divergence from the standard or see how it developed?

“That first cask was strong,” says Trichet, “and finding the point of balance was difficult. It had hard, strong notes of mushroom and spices. You have no control over nature. You can only wait and see.” The wait lasted five years, but in 2009, she and her assistant, Baptiste Loiseau, confirmed that the Cognac was ready.

The second rare cask was even more of an anomaly. Again, it presented with high alcohol—42.6 percent—and subtle, earthy flavors. It was also one of the smaller tierçons in the cellar. Trichet marked the cask with chalk in 2009 and tasted it every few months after that. In 2012, she and Loiseau sampled it and agreed: Louis XIII Rare Cask 42,6 (named for the alcohol content) was ready.

India might seem a curious choice for the introduction of a Cognac, but as Rémy Martin’s chairman, Dominique Hériard Dubreuil, notes, nature and tradition are of paramount significance to both Louis XIII Rare Cask and the Mewar region. Cognac is a product of nature, subject to the characteristics of a given barrel, the behavior of different distillations, and innumerable variables in the cellar. To single out a barrel and nurture it to perfect maturity requires informed stewardship of the legacy of previous cellar masters.

“It was quite an event for us to decide to release a rare cask of Louis XIII,” says Dubreuil. “For the single worldwide launch, we wanted a setting that combined tradition and the beauty of nature. What the maharana has done to preserve what was passed down to him is quite remarkable. He maintains the legend.”

Sriji Arvind Singh Mewar, the current maharana and the 76th representative of the Mewar dynasty, is the “custodian” rather than the ruler of his kingdom. (Since joining the newly independent India in 1949, members of the royal family have received no direct income from their former subjects.) The maharana and his father transformed the royal properties into heritage hotels and museums. The grounds of one of those properties, the City Palace—a flamboyant complex built in 1559 on the east bank of Lake Pichola that has been converted into a museum—provided the perfect setting for a welcome dinner.

The evening’s events began at sunset on the waterfront terrace of the Leela Palace, where we watched martial-arts and dance demonstrations while sipping Champagne and Cognac. Dressed in white as instructed, we seemed to glow in the twilight.

As darkness fell, we were ushered into launches that took us along the lake to the City Palace for the dinner. At the palace, the maharana, resplendent in his silver jacket, welcomed us—to India, to Rajasthan, and to his home. He nodded, and spotlights began to play on the palace facade as dancers took their places along the steps and ledges.

When the maharana sat, it was a signal that the meal could begin. While troupes of dancers streamed across the palace facade, perfectly choreographed teams of servers brought dishes to the two vast U-shaped banquet tables where the guests were seated. The servers explained each of the seven courses and five sauces in turn. French wine flowed, and French water was poured. Every glass was bottomless. When dinner ended, the maharana stood and shook hands with most of his guests. Then he climbed into one of his impeccably restored Rolls-Royce touring cars and rode away.

Back at the Leela Palace, the Amer­ican guests repaired to the bar to nurse glasses of Rémy Martin XO Excellence and digest the evening. Conversations ranged far and wide, but one theme was foremost: We would surely see the Louis XIII Rare Cask, but would we taste it? With just a single cask for the entire Cognac-drinking world—and with each of the 738 black-crystal-and-pink-gold Baccarat decanters of the Cognac carrying a suggested retail price of $22,000—was there enough to spare?

Rémy Martin teased out the India experience through a second day, organizing a presentation of traditional fine crafts and the appearance of a couple elephants for atmosphere, photo sessions in traditional Rajasthani royal attire, and, finally, a dinner at Jagman­dir Island Palace in the middle of Lake Pichola. The setting—at this former royal residence that is now a hotel—was Indian, but the night was French. The meal (a Parmigiano tart of smoked salmon, an exquisite roasted sea bass, a dessert of mango-vanilla tapioca with coconut and lemongrass) was light and matched with Château Cos d’Estournel wines.

Then came a pause in service. Was this the end of the meal? A few moments later, servers brought each guest a crystal goblet and filled it with about an ounce of Rare Cask 42,6. Silence reigned for a good minute as each guest sipped slowly and savored—and smiled. The complexity of the Cognac unfolded on the tongue, from the fruit of the Ugni Blanc grapes (still present after so many decades) to the smell of dry fallen oak leaves in autumn sunshine, a hint of gingerbread, and toasted nuts.

I recalled what Trichet had told me about her background as an organic chemist. “Chemistry can make you understand,” she said. “But it cannot make a grand Cognac. Louis XIII is all about emotion and senses.”

That goes double for the Rare Cask.