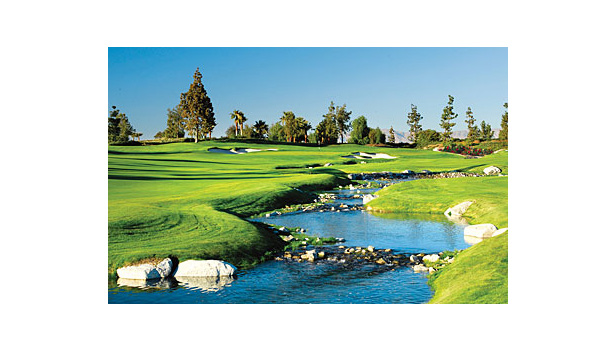 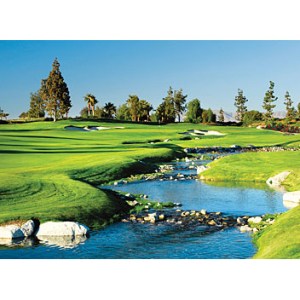 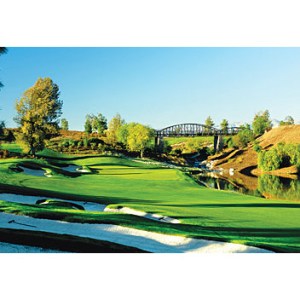 Welcome to the Taj Mahal of golf courses,” says Dave Alvarez, a PGA pro at the Madison Club, as he leads me to the practice tee. An assistant dressed in a crisp white long-sleeve shirt and green necktie—like Bobby Jones, only without the knickers—hands me a freshly polished iron, while my caddie arranges a dozen new golf balls at my feet in an evenly spaced row. The occasional zing of my club and the plunk of a ball dropping on a distant knoll are the only sounds disturbing this implausibly lush environment in California’s Coachella Valley.

Those balls, I am told, are picked up by hand instead of with a retrieving machine, which would create background noise and leave unsightly lines on the grass. To further ensure a pleasant experience, the Madison Club furnishes its practice range with couches and patio tables. “You would be surprised how many people come out and just relax at the range,” says Mike Abbott, the club’s general manager. “They’ll read a book, listen to music, hit a few balls, drink a glass of wine, and just hang out.”

You can even order ahi tuna sliders and Kobe beef burgers—or just about anything else you crave—from the bar and grill adjacent to the range. The course itself serves up several more pleasant, yet slightly surreal, surprises. A comfort station stocked with snacks and refreshments greets you at the fourth tee, and a fruit market with dried fruits, nuts, and beef jerky appears only a few holes later. Another grill, near the ninth hole, offers burgers and bratwursts, while a lemonade stand between the 16th green and 17th tee features a vault filled with premium vodkas. “You might be having a good day at that point and need a refreshment,” says Abbott, “but if you’re having a bad day, why wait a half hour before you have a cocktail?”

From the moment I tee off, I appear headed for a stiff drink on 17. However, the Madison Club’s scenery proves to be a more than adequate mood stabilizer. The stark contrast between the impeccably groomed fairways and the rugged reddish-brown backdrop of the Santa Rosa Mountains offers the sensation of playing golf in a Thomas Moran watercolor of the Old West. This impression intensifies on the fifth hole, when my ball lands just shy of the water hazard and a coyote leaps out from the reeds and dashes across the fairway, glancing over its shoulder as if daring me to draw my iron.

The canine vanishes into the brush as suddenly as it appeared. Mark Twain, in his book Roughing It, described the coyote as “a living, breathing allegory of Want” that is always hungry. The animal on the fairway may well have been scrounging for food, but no mem­ber ever could go hungry at the Madison Club—nor could playing a round of golf here be any further from roughing it. The club may even have made a convert of Twain, a golf-detractor who once famously referred to the game as “a good walk spoiled.”

The scene at this oasis in La Quinta, Calif., located 120 miles southeast of Los Angeles, has not always been so idyllic. The 500 acres of land the Madison Club now occupies previously was part of a real estate project known as the Country Club of the Desert. According to public records, would-be developer and convicted felon Jack Franks raised $20 million for the project, much of which he misappropriated for his own use, purchasing two planes, a yacht, and various residential properties in California and Mexico. Franks built 27 holes of golf at the Country Club before legal issues caught up with him and sidelined the project. “They called it the Enron of the desert,” says Michael Meldman, CEO of the Madison Club’s parent, Discovery Land Co. “The idea was to make it the club of clubs. So when we took it over, I sat down with the investors and said, ‘This is the best thing that ever happened to you.’ They looked at me like I was a little crazy, but as I explained to them, ‘We’re going to give you what you wanted, and we’re going to make it better than you ever imagined it in the first place.’ ”

To achieve that end, Meldman—whose company has developed more than a dozen golf communities in resort destinations such as Los Cabos, Mexico, and the Big Island of Hawaii—closed the Country Club of the Desert, which had an 18-hole Pete Dye course and an unfinished layout designed by Clive Clark. Meldman rezoned the property for fewer homes, retouched the Dye course, enlisted Clark to complete the other course, and finally reopened the club as the Hideaway. The developer then set aside the remainder of the property, which originally had been slated for 54 holes, to build what he hoped would be the greatest golf club in the desert. “The idea at Madison was to create our own environment,” recalls Meldman, who hired his longtime collaborator, Tom Fazio, for the project. “I said, ‘Tom, let’s create a Bel-Air and Riviera.’ He took me seriously.”

Fazio believes he delivered at the Madison Club. “It’s about as dramatic as anything that’s been done in the Coachella Valley,” says the architect, who also designed the nearby Vintage Club and Quarry golf courses. Fazio’s desert résumé also lists the Wynn Golf Course and Shadow Creek in Las Vegas, the latter of which he says presented a challenge similar to the Madison Club, of “creating something from nothing.”

Fazio’s crew transformed the flat desert land at the Madison by redistributing more than 5 million cubic yards of dirt, forming valleys that reach depths of more than 30 feet. “We weren’t right up against the mountain, but by carving the golf course into the ground, we brought the feeling that the mountains were right up next to us,” says Fazio. The dirt removed from the ground was distributed around the development parcel to create lots with mountain vistas and views of the golf course, which opened in November. “Just 12 months elapsed from the time we broke ground to the time we were teeing it up,” says Fazio.

The massive undertaking by Meld­man and Fazio cost an estimated $200 million. “I think they spent something like $10 million on trees alone,” says golf pro Alvarez. Indeed, some 3,500 mature pines and palm trees line the carpetlike fairways, as do more than 150,000 plants, each of which is irrigated by two water bubblers.

The no-expense-spared approach to building the Madison Club follows a pattern that Discovery Land set with its previous developments. Meld­man start­­ed the company a decade ago when he built Estancia, a resort community in Scot­tsdale, Ariz., that is anchored by a Fazio course. Since then, Meldman’s formula of highly exclusive golf clubs lined by a limited number of multimillion-dollar homes has attracted a faithful following. “Where someone might own at Madi­son, they might also own in Whitefish [the Iron Horse in Montana], might own at El Dorado [in Los Cabos],” explains Abbott, who oversees all of the disparate prop­erties. Meld­man estimates that about 20 percent of Discovery Land’s clients own property in more than one development.

The golf course is the featured amenity at each resort, but all Discovery Land communities emphasize activities indigenous to their respective locations. “In Montana,” says Meldman, “the idea is to teach you how to fly-fish and wakeboard and camp. In Hawaii we try to make you surf and become acclimated to the water.”

In the California desert, however, the goal is to relax—and eat well. The resort’s homes and clubhouse have yet to be built. (Construction is under way; the five-suite clubhouse, which will include a spa and restaurants, is expected to be complete by fall 2008.) However, the cuisine at Madison’s temporary dining facility, known as the Meriwether, compares favorably to that of any permanent restaurant in the golf world. Here, a full-time sushi chef works with fish that is flown in daily. “No one has tried to tackle food the way we have,” says Abbott, and I soon discover he means it. In keeping with the scale of the property, cocktail shrimp at the Madison Club are the size of lobsters.

As with any hidden oasis, the trick to the Madison is finding it. Just around the corner from the Griffin Ranch equestrian community in La Quinta, an unmarked driveway leads to a pair of majestic Canary Island date palms that appear as if they have been there for 50 years, though if you guessed five months you would be closer to the truth. An equally stately yet also new gatehouse guards the main entrance to the club, where high white walls hide one of the most scenic golf courses that few people will ever see.Even the Madison Club’s logo—an extended telescope—suggests that the only way most golfers will lay an eye on this course is through a very long lens. Membership is by invitation only and is limited to 225, a figure that corresponds with the number of homes and villas planned for the site. Lots average three-quarters of an acre and range in price from $2 million to $5 million. (Ninety lots had been sold at the time of this writing.)

For those who are invited to join, membership does have its advantages, not the least of which is the ability to count one’s kin—children, parents, and grandparents—as members for life. (Membership costs $200,000 up front plus $20,000 per year thereafter; prices are subject to change.) “The way I look at it, it’s an investment in your family,” says Meldman, who is the father of two teenage sons. “It’s a second home, and you want your kids to stay there with or without you. It would be silly for them not to be able to play the golf course.”

In fact, it would be a downright shame. Fazio and Meldman have created a unique and dramatic desert course at the Madison Club. From the back tee on the eighth hole, a particularly impressive par 5, the view is framed on the right side by a placid lake; tall pines rim the horizon; and a babbling stream winds around from behind the distant green, splitting the fairway in two. “You can play it very safe down the right, or you can make it shorter by going down the left and putting yourself in position for an eagle,” says Hideaway course designer Clark, who is a property owner and member at the Madison Club. “Risk and reward holes always have a certain amount of intrigue for the golfer.”

Fazio hopes that this sense of mystery will keep the Madison Club’s members coming back for more. “If you finish a round and say ‘I can’t wait to go play again,’ then we’ve succeeded,” he says.

As I sip a hard lemonade on the tee at 18, I decide that, despite enduring the type of round that Twain described, I can’t wait to play the course again. Then Alvarez snaps me out of my reverie. “Better hurry along,” he says. “The next group’s only two hours behind.”