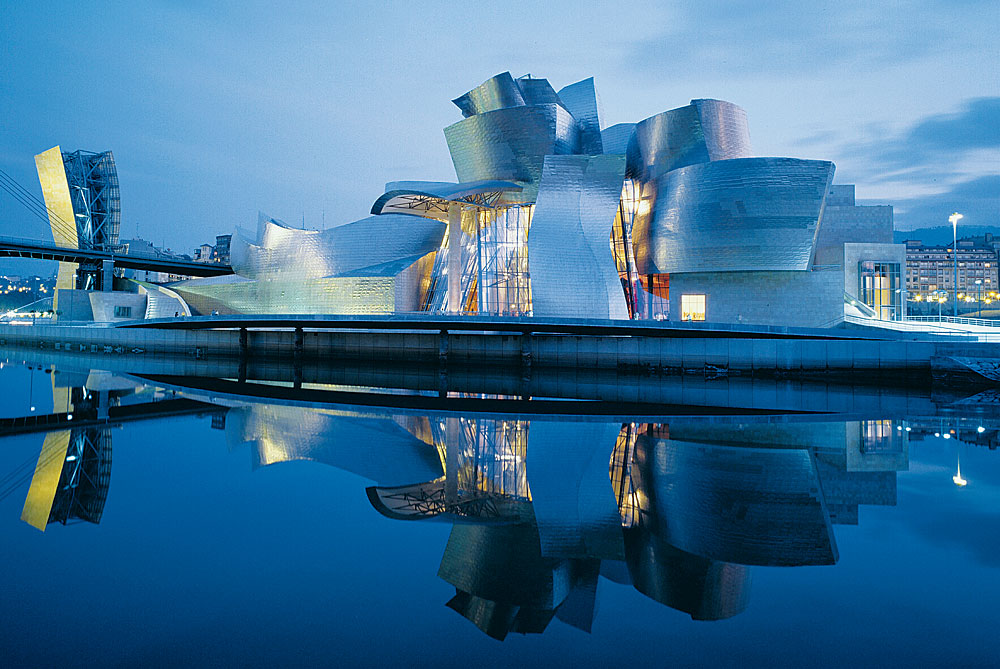 The time is close to 2 am, and we are among the last guests of the evening. We are also the most fortunate, having gained entree to the kitchen of Zortziko, chef Daniel Garcia’s Michelin-starred restaurant, which occupies a 19th-century mansion within walking distance of Bilbao’s famed Guggenheim Museum. Here, in customary Spanish fashion, we linger into the early hours, indulging in postprandial chat with Garcia, a round-faced man with smiling eyes who explains to us the part that the museum and its celebrated architect have played in his success.

“The best ambassador for my restaurant is Frank Gehry,” he says. “When I opened the restaurant in 1989, we had only five tables, and there were very few tourists. My clientele was mostly the moneyed locals. That was during a time of change from old industry to technology. Where the Guggenheim is now was once a shipyard filled with freight containers. It was a very painful time.”

During that period, this city in northern Spain’s Basque Country reinvented itself, trading its past role as one of the world’s largest centers of steel production to become a high-technology hub, much as Pittsburgh, Pa., did in the 1970s. “The conversion took a full decade,” remarks my travel companion, Alejandro Muguerza (who also happens to be a native Bilbaíno), “and there were many strikes and much unemployment.”

Muguerza runs a catering company, Le Basque, in Miami, and like other chefs—Alain Ducasse, Thomas Keller, and Alice Waters among them—he has made several pilgrimages to the Basque Country in search of new recipes. “Despite the difficulties of the ’70s and ’80s, Bilbao has remained Spain’s richest city per capita, followed by Barcelona and then Madrid,” he says. “Subsequently, dining here has always been very elegant, even during hard times. The city just never got the publicity that it now gets with the Guggenheim. Before, only the world’s top chefs and members of gastronomical societies knew of us. Since the Guggenheim arrived 12 years ago, the city’s opened up quite a bit.”

Comparable in size to Boston and surrounded by mountains, Bilbao draws a more reserved, mature traveler than Spain’s other cultural meccas. “We don’t want to attract the shorts-and-flip-flops crowd,” says Muguerza, who divides his time between Bilbao and Miami. “There was a big uproar when the Guggenheim was first proposed. We don’t want tourists; we want like-minded friends.”

While the museum is the initial attraction for many visitors, they often return to Bilbao for its other highlights, such as opera, wine, and dining. The city’s air is civilized but relaxed. Typically, the citizenry crowds the streets into the early hours of the morning, eating, drinking, and socializing. The most popular late-night venues are the numerous bars serving small bites—including shrimp and prawns, cheeses, and crepes—known elsewhere in Spain as tapas; Bilbaínos use the Basque word pintxos (pronounced “peen-chose”). Found throughout the city, pintxos bars are often clustered in a single block so that patrons can stroll in and out of several, picking up plates and running up tabs. Payment is based on the honor system: When you have had your fill, you simply tell the counter attendant, who charges you accordingly.

Honesty also guides the region’s cuisine. “In the Basque Country, chefs don’t overly elaborate their presentations,” says Muguerza. “The concept here is straightforward food at its very best, with little or no spice, where a tomato tastes like a tomato, fish tastes like fish, and so on. Take, for example, an egg. But not just any egg—it has to be the very best that it can be. The hen has to be free-range; it has to be out in the sun, eating grains. And the egg has to be laid the very same day it comes into the kitchen.”

While Garcia agrees, he does take liberties with certain ingredients. “Cooking is sometimes like being a matador in a bullfight,” he says. “Some ingredients, such as a fresh oyster, are already perfect. How do you add imagination to that without destroying it? You have to do it delicately. But an onion, you need to subjugate it like a bull, because if you leave it on its own, it will kill everything else under its power.”

Garcia’s signature appetizer—whipped foie gras layered with caramelized pear and a gelée of young Rioja grapes topped with Maldon salt—illustrates his unpretentious yet imaginative style. He first sears the foie gras at high heat before briskly beating it over an ice bath. He then adds a dash of sugar, nutmeg, and pepper before whipping the liver to the consistency of mousse. “The first French clients I served this dish to wanted to kill me,” he says with a laugh. “They asked me how I could treat foie gras that way. They were mad that it did not represent the French tradition. I told them duck liver is universal, and that I wasn’t trying to represent them.”

French influences have historically abounded in the Basque cooking of nearby San Sebastián, where, in the late 19th century, the Spanish royal family—accompanied by its Parisian chefs—often summered. The Basques incorporated the chefs’ techniques into many of their own recipes. In Bilbao, however, the French influence never really took hold. “The orientation here is more English,” Muguerza says. “Many of Bilbao’s iron tycoons were from England. When they arrived in the mid-19th century, they brought along their butlers, cooks, and nannies. They also brought the sport of game hunting. Even today, the best place in Spain to eat game—woodcock, pigeon, and partridge—is in Bilbao.”

Since the mid-1970s, however, the Basque Country as a whole has undergone a culinary renaissance. Dubbed the New Basque Cuisine (Nueva Cocina Vasca), the movement began with a group of young San Sebastián chefs—notably Juan Mari Arzak, Pedro Subijana, and Martin Berasategui—who reintroduced simplicity to Basque cuisine, often through techniques borrowed from Japan and other parts of Asia.

Today, this lighter cuisine, which emphasizes broths over heavy sauces, also extends to Bilbao, where proximity to the ocean means that seafood dominates nearly every menu. (Sparse amounts of parsley and garlic typically are used as flavor enhancers.) Chef Fernando Canales is one of the movement’s most adept practitioners. His 70-seat, Michelin-two-starred rooftop restaurant Etxanobe—a fixture on the Nervión, the river that runs alongside the Guggenheim—offers diners a host of seafood specialties, including scampi carpaccio drizzled in smoked-bacon vinaigrette, as well as a prawn the size of a small lobster served with a sherry-reduction sauce that explodes in the mouth with sweet, delicate, and briny flavors. Etxanobe also embraces Jabugo ham from the south of Spain; the Basques are considered the world’s greatest consumers of the meat.

Not all of Bilbao’s extraordinary eateries are as spacious or as elegant as Canales’, however. Adventurous gourmands should investigate Gallina Ciega (“Blind Hen”), a six-seat, one-table restaurant that opens and closes on the whim of its temperamental chef-owner, Jon Ezkurdia. On his good days, Ezkurdia delivers a culinary experience that makes you want to lick the plate at the end of every course. On his more fickle days, he has been known to turn away patrons because of their taste in clothes. Despite his idiosyncrasies, his restaurant—located close to the Guggenheim and next door to the Bilbao Fine Arts Museum—has been booked up seven months in advance for years.

Diners at the restaurant Gure Kide, on the other hand, experience the casual yet sophisticated warmth for which Spain is so well known. A night here typically begins after 10 pm, at the six-stool bar with a glass of Txakoli (“chock-o-lee”), a dry white wine made from the region’s coastal grapes. A late-night meal might range from a simple bowl of pil pil (a traditional Basque soup consisting of cod, olive oil, and garlic) to an elaborate sequence of courses that includes tuna and cod tartare on a base of thinly sliced al dente potato and drizzled with olive oil and soy sauce; a scallop seared to perfection and crowned with caviar and black octopus ink; and halibut topped with tomatoes as sweet as candy. Diners should not deny themselves the pleasure of chef Aitor Elola’s poached egg, which arrives at the table dressed in truffle-and-porcini sauce with a fresh sprig of fennel.

Baita Gaminiz, located a block away from Gure Kide, serves the city’s most modern fare. Here, chef-owner Aitor Elizegi’s menu features inventive interpretations of traditional Basque flavors, such as baby squid cut to resemble fettuccine and served with Parmesan broth; squab served with peach puree; and fresh anchovies topped with celery gazpacho. Those who dine on the restaurant’s deck in the afternoon will savor these dishes as the changing light caresses the sweeping curves of the Guggenheim.

At the more rustic end of the spectrum, the family-owned Jolastoky restaurant, located 12 miles from Greater Bilbao in the port town of Getxo, upholds the Basque tradition of slow cooking. Situated in a tree-lined residential neighborhood of Gothic stone mansions, the fire-lit restaurant caters mostly to locals (and visitors who know locals), offering a “gourmet peasant” menu of stews, game meats, and, naturally, seafood. Specialties include an appetizer of grilled green chili peppers, which, thanks to the Basque Country’s cool weather, have a flavor that is sweet rather than hot. Presented on English bone china, the cuisine at Jolastoky is seasoned not with spices but with vegetable broths—whether you choose a stew made from scallops, baby potatoes, locally foraged mushrooms, baby artichokes, and fennel or a steamed bass with crisped skin drizzled with saffron oil.

While diners at Jolastoky enjoy Old World ambience and young Rioja wines, back in town a number of construction cranes loom in the gathering dusk—evidence of still newer architecture about to grace the city’s horizon. The Iranian-born architect Zaha Hadid, for instance, is designing a mixed-use residential complex; Spanish architect César Pelli, a tower; and Philippe Starck, a cultural and leisure center that will rise out of a 1906 Catalan modernist facade. Rumors that the Guggenheim Foundation is set to build a second museum in a nearby protected reserve currently circulate among tables at the pintxos bars. When asked if he plans to adjust to the greater influx of visitors to the area by adding more tables to his 70-seat establishment, Garcia smiles. “No,” he says. “I have plans to open a second restaurant, this one even closer to the Guggenheim.”

To read more about Bilbao’s dining culture and where to stay, visit www.robbreport.com/bilbao.

When the Frank Gehry–designed Guggenheim Museum opened in Bilbao, Spain, the architectural masterpiece indirectly drew international attention to one of the city’s best kept secrets—its chefs. Below we present Bilbao’s best.

Chef-owner Aitor Elizegi’s menu takes a modern approach to traditional Basque cuisine. Late-afternoon lunches include views of the changing light on the Guggenheim Museum nearby. +34.94.424.22.67

With just one six-seat table, this restaurant (its name is Spanish for “Blind Hen”) has no menu; diners must surrender their appetites to the daily inspirations of chef-owner Jon Ezkurdia. The Bilbao Fine Arts Museum is next door. +34.94.442.39.43

Chef Sabin Arana Olaizola’s seasonal Basque dishes, served in this restaurant in an affluent neighborhood by the sea, are prepared using slow-cooking methods. Cuisine ranges from game and seafood to traditional stews. +34.94.491.20.3, www.restaurantejolastoki.com

Occupying a 19th-century mansion within walking distance of the Guggenheim Museum, this restaurant affords a selection of 600 wines alongside an inventive menu that earned the chef-owner, Daniel Garcia, a Michelin star. +34.94.423.97.43, www.zortziko.es