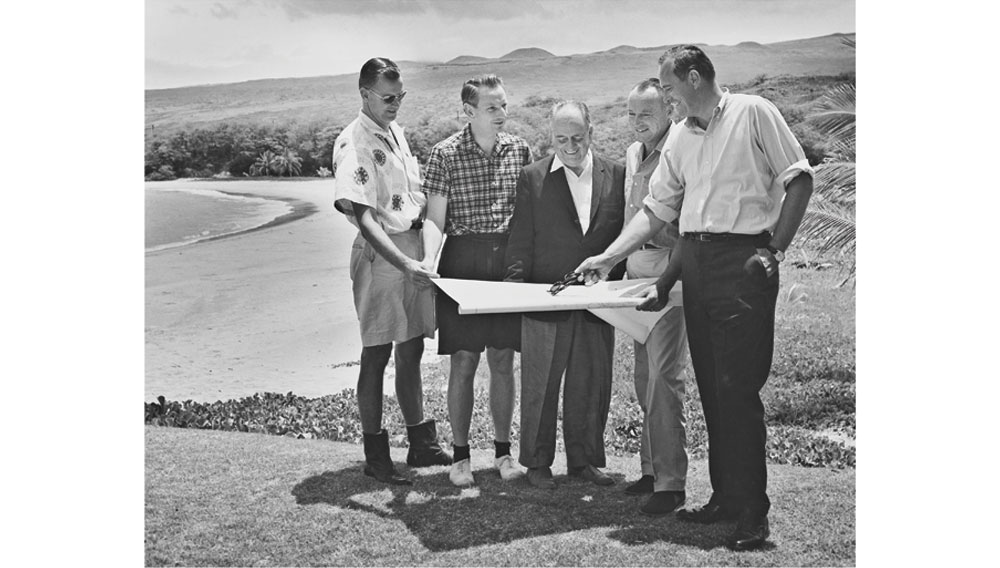 In 1952, while sailing his yacht in the Caribbean, Laurance S. Rockefeller anchored off the coast of Caneel Bay Plantation in the U.S. Virgin Islands. Moved by the serene stretch of sandy beaches and frangipani-filled coves, Rockefeller—an avid outdoorsman and environmentalist—soon purchased the land and set aside 5,000 acres as a national park. His vision for the property also included a low-key luxury hotel where the post–World War II wealthy could frolic among the unspoiled and the uncomplicated. Four years later, along one of the park’s pristine coves, Rockefeller opened Caneel Bay as the Caribbean’s first upscale eco-resort.

Then as now, to be a Rockefeller was to be terrifically rich. Laurance was, by most accounts, a virtuoso in matters of business. But the third son of John D. Rockefeller Jr. aspired to a more lasting legacy, pouring dozens of years and millions of dollars into protecting undeveloped land and incubating the yet-to-be-defined concept of ecotourism. With Caneel Bay as a blueprint, Rockefeller’s version of do-gooder capitalism focused on low-density, architecturally significant hotels that were sensitive to, and in tune with, their surroundings. The model proved more than a passing fancy, and by 1965 his RockResorts hospitality group presided over an elite collection of properties that included the Mauna Kea Beach Hotel on Hawaii’s Big Island and Little Dix Bay in the British Virgin Islands.

Rockefeller divested himself of RockResorts in the late 1980s, and the majority of his properties were subsequently sold to independent owners. But the eco-entrepreneur’s vision has proved sustainable: His pockets of paradise—many of which are celebrating landmark anniversaries with multimillion-dollar renovations—have remained true to his mission and today stand as authentic outposts in a world where ecotourism has become a catchphrase. Robb Report recently checked in to Caneel Bay and a handful of other retreats where Rockefeller’s legacy lives on.

Little has changed at Caneel Bay since Rockefeller first introduced it to the world in 1956. Spread over 170 acres, it remains the only resort located within the now 7,000-acre Virgin Islands National Park. Afternoon tea is still served at the Turtle Bay Estate House, and seven white-sand beaches remain fringed by gin-clear water. Even the resort’s new features—such as the Italian restaurant that opened last year in an 18th-century sugar mill—are rooted in the past. Caneel Bay’s 166 accommodations are admittedly due for a renovation, which is scheduled to take place in the coming years. However, the low-rise, bungalow-style buildings in which they reside will retain their timeless and seamless charms, blending as they always have into the pristine surroundings.  —David Lahuta

Rockefeller’s Puerto Rican playground opened in 1958 on a golden stretch of sand some 30 miles west of San Juan. Ava Gardner, Elizabeth Taylor, and John F. Kennedy were all regulars at the resort’s beach parties and pig roasts, but the heyday eventually came to a halt. A series of ownership changes and renovations—including an unfortunate Hyatt expansion in the early 2000s—ultimately led to the hotel’s closure. Now, following a $342 million reinvention, Dorado Beach is reclaiming its place as the premier retreat in Puerto Rico.

Recollections of Rockefeller’s former Xanadu persist in the resort’s jungle-lined pathways, as well as in the library filled with photos of its founding father. Perhaps the greatest memento of Dorado Beach’s first incarnation, however, is the 80-year-old ficus tree that grandly marks the Spa Botánico’s entrance. At night, sparkling lanterns dangle from the tree’s bowing branches as a shining reminder of Rockefeller’s back-to-nature spirit.  —Jackie Caradonio

Opened in 1964, Rockefeller’s British Virgin Islands retreat was an unmistakable personification of its founder. A barefoot alternative to the grand beachfront hotels that were popular at the time, the resort shunned air-conditioning for the shade of a palm tree, television for vivid sunsets, and swimming pools for the Caribbean Sea.

Half a century later, Little Dix Bay’s pared-down-luxury motif is largely intact. The Virgin Gorda resort, which has been managed by the Dallas-based hospitality group Rosewood Hotels and Resorts since 1993, centers on a horseshoe-shaped beach crowned by the same soaring thatched hut that welcomed Rockefeller’s first well-heeled guests. Additions throughout the years have been relatively few—a cliff-top spa, a swimming pool, 21 new suites and villas, and, mercifully, air conditioners—while restorative measures have been executed with a gentle hand.

In January, Rosewood celebrated the resort’s 50th anniversary with the unveiling of the first phase of an ambitious yet faithful renovation that thus far has converted Rockefeller’s 10 original Tree House Cottages into five expansive suites with soaking tubs, outdoor showers, and decks. Forthcoming phases promise upgrades to the resort’s restaurants, tennis courts, and remaining guest rooms. Still blissfully missing from most suites will be televisions.  —J.C.

In October 2006, an earthquake off the Big Island of Hawaii devastated the destination’s most beloved retreat. The Mauna Kea Beach Hotel, the crown jewel in Rockefeller’s original collection, closed from the damage, and its future was in doubt. But the famed hideaway on Kauna‘oa Bay reopened two years and $150 million later, and today, as it approaches its 50th anniversary, the hotel is better than ever.

The collection remains today, with more than 1,600 pieces—from kimonos and quilts to a 7th-century pink-granite Buddha statue that sits at the top of a stone staircase—displayed throughout the hotel. The original architecture has also survived the earthquake and upgrades, but the Mauna Kea’s 252 rooms have been reenergized in time for the property’s half-century celebration. Accommodations have expanded—in several cases three rooms became two—in the main wing, while the hotel’s beachfront wing, which completed a renovation late last year, has bright new interiors that play off the sweeping lawn, golden sand, and sparkling sea that stretch out before them.

The Mauna Kea also added a new spa and a fitness center, and Rees Jones, a son of Robert Trent, completed a multimillion-dollar update of the golf course. Perhaps the only thing more beloved at the Mauna Kea than its course is its beach, which, set in a perfect crescent-moon cove, is one of Hawaii’s—if not the world’s—finest stretches of sand.

Rockefeller’s love for the great outdoors is perhaps most evident in the pastoral Vermont town of Woodstock. The conservationist—who married Mary French in one of the town’s churches in 1934—brought his brand of environmentalism to New England’s rolling pastures and verdant woodlands with the establishment of a 643-acre preserve that would become Vermont’s first and only national park. In 1969, he opened the Woodstock Inn and Resort along the southern cusp of the reserve, creating a town hub that united the local community with its alpine surroundings. The resort remains Woodstock’s epicenter today, with its Robert Trent Jones–designed golf course, 10,000-square-foot spa, tennis courts, farm-to-table restaurant, and 142 guest rooms adorned with original Connecticut River Valley artworks and locally crafted wooden furnishings. A short walk from the inn’s manicured front lawn is the Marsh–Billings–Rockefeller National Historical Park, where guests can explore a patchwork of lakes, forested trails, and farmlands.

The Boulders, a Waldorf Astoria Resort

Rockefeller’s final resort opened in 1985 amid 1,300 acres of yuccas, saguaros, and striking granite outcroppings in Arizona’s Sonoran Desert. During construction of the Boulders, Rockefeller insisted that the native flora remain untouched, so that the region’s wildlife—from coyotes and javelinas to Gila monsters and rattlesnakes—would survive and thrive. Still, the $200 million development brought new levels of comfort and conveniences to the desert, with 120 adobe casitas, a championship golf course, tennis courts, a swimming pool, and trails for horseback riding, hiking, and more.

Over the years, the Boulders (which was the site of this month’s fashion feature “Magnificent Mavericks,” page 104) has added 40 casitas and 61 villas, as well as a 33,000-square-foot spa, restaurants, and a second golf course. Waldorf Astoria Hotels and Resorts acquired the property in 2009 and completed renovations two years later. Despite the many additions and upgrades, Rockefeller’s respect for the outdoors has persevered, and the Boulders, as it approaches its 30th anniversary next year, still blends almost imperceptibly into the rugged Sonoran eco-scape. —Irene Rawlings