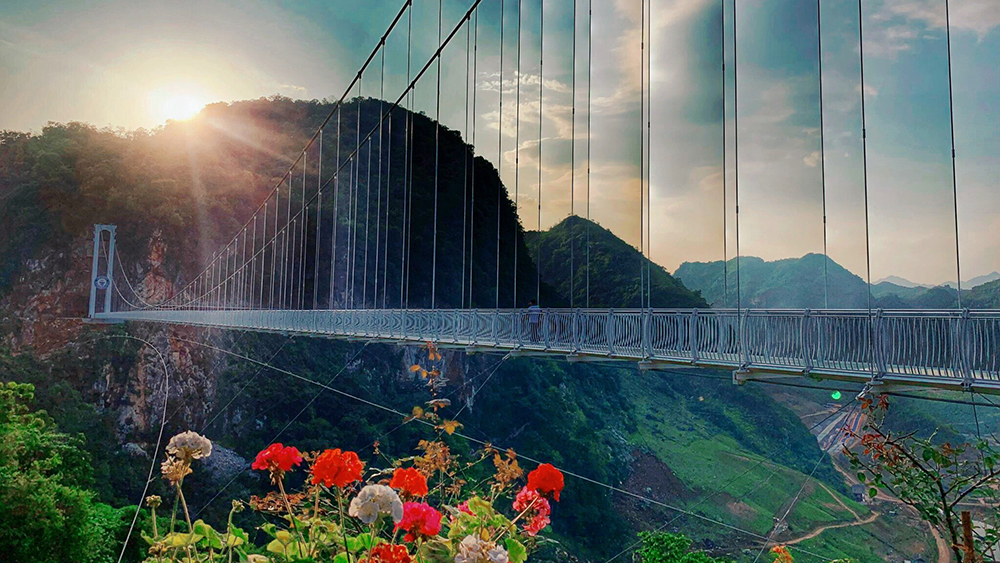 Thrill seekers, this one’s for you.

The world’s longest glass-bottom bridge just opened in Vietnam, and it’s not for the faint of heart. Located in the Moc Chau district of the country’s Son La province, the Bach Long bridge spans more 2,000 feet and stands almost 500 feet above a verdant valley. It opened on April 29 to commemorate 47 years since the end of the Vietnam War, according to the South China Morning Post.

If the bridge’s height gives you nightmares about what the drop to the bottom would be like, there’s little to worry about: The bridge’s floor is made of three layers of tempered glass, each about 1.5 inches thick. Hoang Manh Duy, a representative of Moc Chau Island, which operates the bridge, notes in a statement that additional security measures will also be in place; for example, traffic will only go in only one direction, and 500 people at most will be allowed on the bridge at once.

Bach Long translates to “white dragon,” a pretty apt name for the bridge, given its appearance. The enormous structure connects two mountains; at one end sits the Chim Than Cave, where natural stalactites associated with the legend of the bird god can be found.

Vietnam is hoping the bridge will help bring tourism back to the country, with risk-taking travelers jumping at the chance to experience the thrilling journey across it. The country didn’t reopen to international travelers until this past March, and in 2020 Vietnam’s tourism department estimated that pandemic restrictions could cost the country $4 billion in lost tourism in three months, Insider reported.

To aid in this revitalization of tourism, Moc Chau Island has been working on building several other attractions, such as mountainside villas, a zipline and a glass-bottom infinity pool (we’re sensing a theme here).

The bridge is seeking recognition from Guinness World Records as the longest pedestrian glass bridge in the world. If it receives that accolade, it would unseat a similar glass bridge outside Qingyuan, China, in that country’s Guangdong province.

For those who travel more for adventure than relaxation, it seems like these’s a new destination to add to your list.