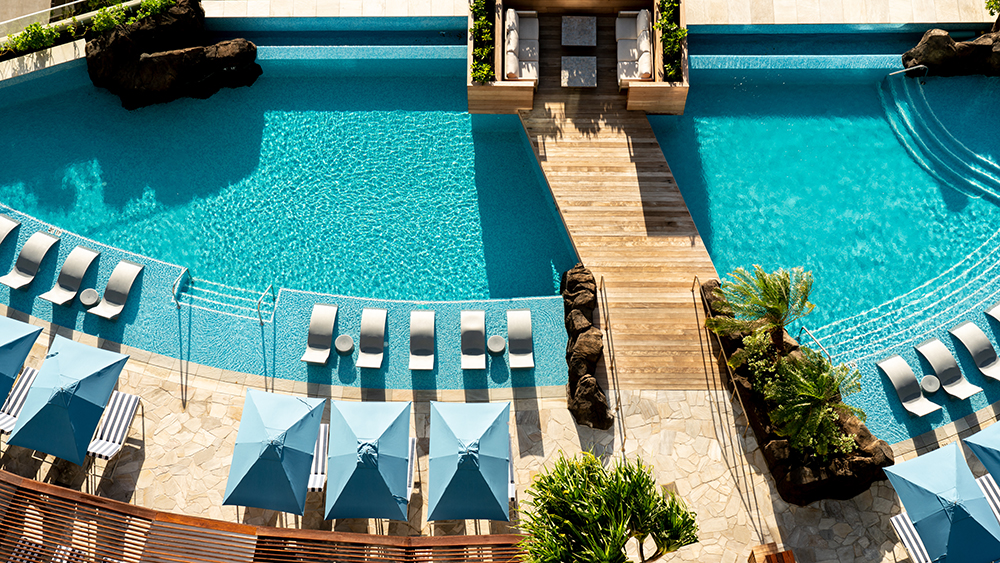 After decades of little  luxe development, a new wave of style and sophistication has come ashore on Honolulu. Once a destination for mass-produced luau buffets and overcrowded sunset cruises, an influx of affluent travelers, particularly from Japan, has enlivened the island city and brought a swell of new, high-end hotels and restaurants to Hawaii’s capital—which makes now the perfect moment to revisit these stunning tropical shores.

Among the newest game-changing debuts is Espacio, which stakes a claim as Hawaii’s most luxurious hotel. The property, across the street from Waikiki Beach, houses just nine 2,250-square-foot residential-style suites, each occupying its own floor with two or three bedrooms and three bathrooms. (For unobstructed, 180-degree ocean views, reserve one of the top four suites.) Design details include expansive balconies, dining tables crafted from slabs of Carrara marble, handmade chandeliers from Morocco and hand-knotted carpets, while impressive amenities extend from butler service and Bulgari bath products to a fleet of Audi Q5 house cars.

Less than a mile away in the former Waikiki Parc Hotel is the Halepuna Waikiki by Halekulani, which opened in late October across the street from its oceanfront sister hotel, the Halekulani. Designed as a serene urban retreat, the property includes 284 rooms—we recommend the opulent Ocean and Grand Ocean suites, each with a view of the Pacific—and a stunning eighth-floor oasis with open-air gardens and a 72-foot infinity pool overlooking the ocean. Book one of the private cabanas for a rejuvenating treatment from a SpaHalekulani therapist.

The second tower of the Ritz Carlton Residences, Waikiki Beach opened just a year ago, and the buildings’ 552 hotel suites include the only four-bedroom option in Waikiki; it’s reportedly become quite popular with Hollywood stars and other A-listers. Also not to be missed: an in-house dining experience at Sushi Sho, the new restaurant from notable Japanese chef Keiji Nakazawa.

The infinity pool at Espacio.  Espacio

One of the buzziest places to eat in the city is Tbd, a two-year pop-up from Indian-born Vikram Garg, former executive chef at Halekulani, that opened in June at the Lotus Honolulu Hotel. Garg has created a focused menu that uses the best local products to re-create flavors from across the globe—try the decadent hotpot of lobster, shrimp and fish in a Makrut lime-scented bisque as well as the massive tomahawk steaks cooked in a tandoor oven.