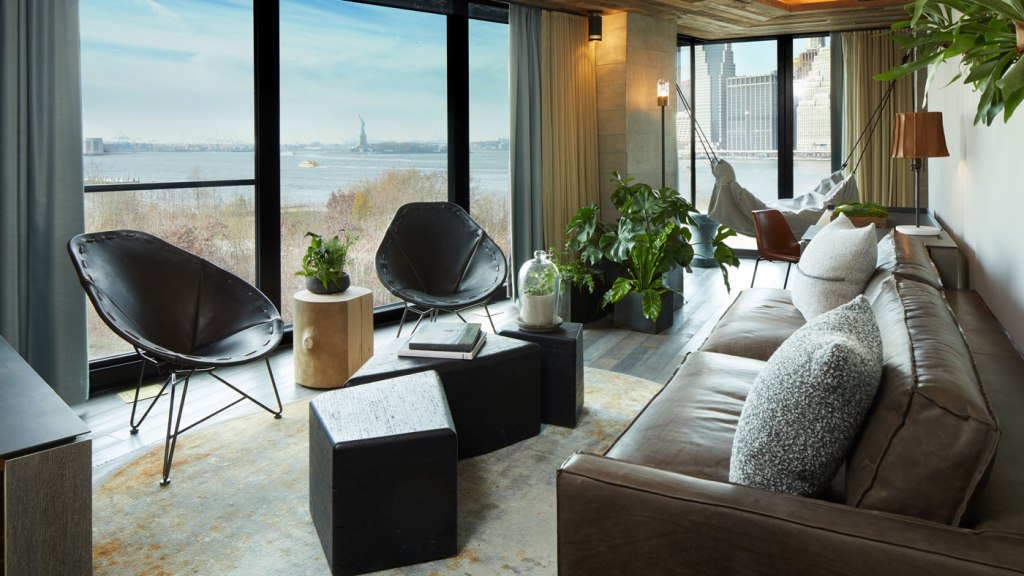 Brooklyn has had its own brand of luxury for some time. If you’ve been to the hipper-than-thou New York City borough before, you know the scene all too well: white-box condominiums, wood-paneled restaurants, exposed-brick bars lit by the ubiquitous Edison light bulb. But a new Brooklyn style has begun to emerge lately, turning the area’s once-cool-but-now-tired edge on its head in favor of something more refined, more sophisticated, and—dare we say—more luxurious.

If you’re looking for old-school luxury—butlers, white-glove service, gilt and crystal, and Michelin stars—you’ll want to stay safe and sound in sexy Manhattan. But for a new generation of luxury, one with innovative amenities, local details, and yes, even a Michelin star or two, Brooklyn might just be the borough for you. Here’s how to do it right.

Opened in January, the Williamsburg Hotel embodies the new Brooklyn aesthetic, blending industrial and classic design with reclaimed-wood floors, art deco–style furnishings, and custom wallpaper. As is the case with many Brooklyn hotels, the rooms are standard and somewhat forgettable, defined by white walls and on-trend-to-a-fault details like tufted leather headboards, subway tiles, and toiletries by neighborhood favorite Apotheke.

But it is the public areas that elevate the 150-room hotel to upscale status. Here you’ll find a rooftop bar and swimming pool (both are both slated to open later this season) centered on a neighborhood skyline icon, the water tower. There’s also Harvey, a restaurant by the carb-loving founders of Brooklyn Bread Lab, and a colorful lobby lounge where creative cocktails and innovative afternoon tea service are the highlights.

“We’re bringing an elegance to Brooklyn that engages with a visitor who is increasingly sophisticated,” says Toby Moskovits, CEO of Heritage Equity Partners, the developer behind the hotel. “We consider ourselves competing with all of New York City—not just the borough of Brooklyn.”

The William Vale takes full advantage of the one thing a Manhattan hotel will never have: spectacular views of Manhattan. Perched atop the 22-story hotel, the Westlight restaurant is the property’s crown jewel, featuring 360-degree views of the city, from Governor’s Island and Queens to the entire length of Manhattan. Inside (and out, during warmer months), the sexy venue—created by the hospitality group behind Manhattan staples like Locanda Verde and the Dutch—features craft cocktails and small bites.

But you don’t have to be sipping a Boulevardier to enjoy the views; each of the hotel’s 183 rooms share the same stunning panoramas from private balconies. Inside, the look is a familiar Brooklyn sight, with the requisite white walls and contemporary furnishings. Only the top suites—namely the Vale Garden Residence with its spacious living quarters and hot tub—come close to approximating the type of over-the-top luxuries we look for in a Manhattan suite.

Call it the godfather of Brooklyn luxury. In 2012, the Wythe Hotel opened in Williamsburg—then a cool nabe lacking a single five-star accommodation—to much acclaim for its sophisticated take on local style. Five years later, it remains a borough standard bearer for its well-regarded Reynard restaurant and see-and-be-seen Ides Bar. We’re not quite fans of the basic rooms—spartan even by Brooklyn standards, with exposed brick walls and minimal furnishings—but we can’t deny this hotel’s status as a true fire-starter for the borough’s luxury scene.

Local Brooklynites balked at the November 2016 opening of Leuca, Andrew Carmellini’s upscale southern Italian eatery, inside the super sleek William Vale hotel. Why would the borough need another pizza place, when the best slices in the world—at no more than a dollar or two a pop, mind you—were already on every corner? But Carmellini’s first Brooklyn restaurant has proven that there is plenty of room to elevate the New York City staple. The eatery offers wood-fired pizza (try the Uncle Gus, topped with artichokes, prosciutto, and fiore sardo) along with a wide-ranging Italian menu that replicates much of the magic of the chef’s Tribeca sensation, Locanda Verde. The look is a clever blend of Brooklyn meets old Italy, blending the patterned floor tiles and leather chairs so common of the borough with black-and-white photos and colorful Deruta pitchers. This is a far stretch from dollar slices—in style, substance, and expense. And we think it’s worth it.

Brooklyn culinary deniers faced a serious moment of reckoning last year when it seemed everyone was declaring that New York City’s best new restaurant was not on Fifth Avenue or Downtown, but nestled behind an unassuming facade on a gloomy street at the foot of the Williamsburg Bridge. The Michelin two-star Aska opened last summer under the direction of Swedish-born chef Fredrik Berselius, bringing New Nordic cuisine to Brooklyn with 10- and 19-course tasting menus. In his delicate construction of each plate, Berselius displays a penchant for cleverly hiding his main ingredients: Langoustine arrives wrapped in a pretty bouquet of herbs and flowers, while razor clams lie in wait beneath a blanket of green peas and elderflower petals. Naturally, everything is fresh as can be; Berselius and his team forage for juniper berries, chickweed, yarrow, or sorrel, depending on the season. And despite the overtly Brooklyn style—dark and moody, with reclaimed wood and mismatched furnishings—the Manhattan elite have taken notice indeed.

The 1 Hotel Brooklyn Bridge is ushering in a true next generation of Brooklyn luxury. Opened in February, the 194-room hotel skipped crowded Williamsburg for a spot in tree-studded Brooklyn Bridge Park, claiming spectacular views of Downtown Manhattan and the Statue of Liberty. But the hotel offers more than vistas; it elevates the local standard for accommodations with innovative décor and amenities, from the hammocks that hang by floor-to-ceiling windows to the curated minibars filled with local delights and DIY cocktails. The rooms here are more thoughtfully conceived than in other Brooklyn properties, eschewing the tired white-wall minimalist look for a tactile aesthetic adorned with terrariums, fur throws, marble bathrooms, and wood-block tables. Amenities are also above-par, from the sleek rooftop pool and Bamford Haybarn Spa (set to debut this summer and fall, respectively) to the innovative culinary program highlighting farm-to-table and al-fresco dining at four distinct venues.

For the guest who wishes to explore Brooklyn—or return to the comfort of Manhattan—the hotel offers a fleet of Tesla cars. There’s also a theater, and this summer, a pop-up beer garden. Indeed, this is the most luxurious hotel in Brooklyn—and an indication of what’s to come in the borough’s not-too-distant future.