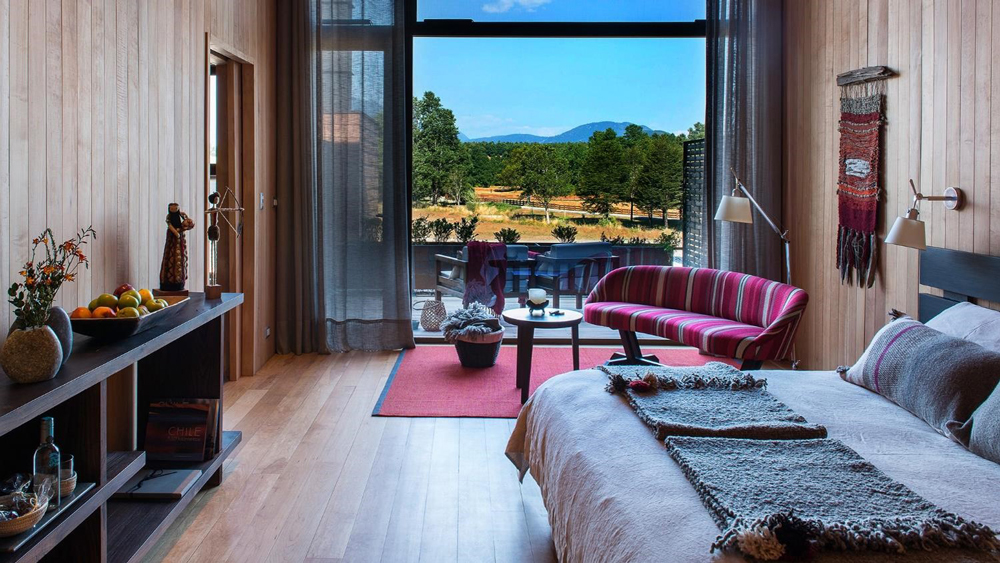 High-end safari favorite andBeyond is getting ready to bring the full force of its brand of luxe getaways out of Africa for the very first time. The company, which has been operating guided tours in South America over the past three years, will open its first lodge outside of Africa on September 1, 2018, after taking over the Hacienda Hotel Vira Vira, which closed its doors on the shores the Liucura River in Pucón, Chile (an hour-long flight away from Santiago), in June for a refresh.

Opened in 2015 by Swiss couple Michael and Claudia Paravicini, Vira Vira has 23 luxurious rooms (including 12 villas) that stylishly integrate local textiles and furnishings in their design. The property also features four hot tubs, a spa, and a restaurant that’s supplied by an on-site farm—much of which, according to a representative from andBeyond, will stay the same for now. That said, once the property closes, the staff will be trained in the over-the-top andBeyond style, and an adjusted, farm-to-table­-focused menu is also in the works—giving guests a chance to enjoy the gorgeous setting along the Liucura river while they sample farm-fresh food.

The company andBeyond, which specializes in luxury African safaris that incorporate its mission of “care of the land, care of the people, care of the wildlife,” has fine-tuned this commitment for a South American context after three years of tours in Argentina, Chile, Ecuador, and Peru. Like all of its other lodges, andBeyond Vira Vira will offer a roster of adventure activities. Though led by the knowledgeable and immersive guides that the brand is known for, here there will be fewer game drives and more part-of-the-action excursions like horseback riding, fly fishing, and white-water rafting. Especially new for the brand will be wintertime offerings, including skiing, snowboarding, and snowmobiling.

Like its sister properties in Africa, which all offer guests a peek into local culture, Vira Vira will also incorporate the way of life of the local Mapuche people into the guest experience—ensuring that the same connection to both land and people that andBeyond has worked so hard to foster at its other lodges will be abundant in this new adventure, as well.