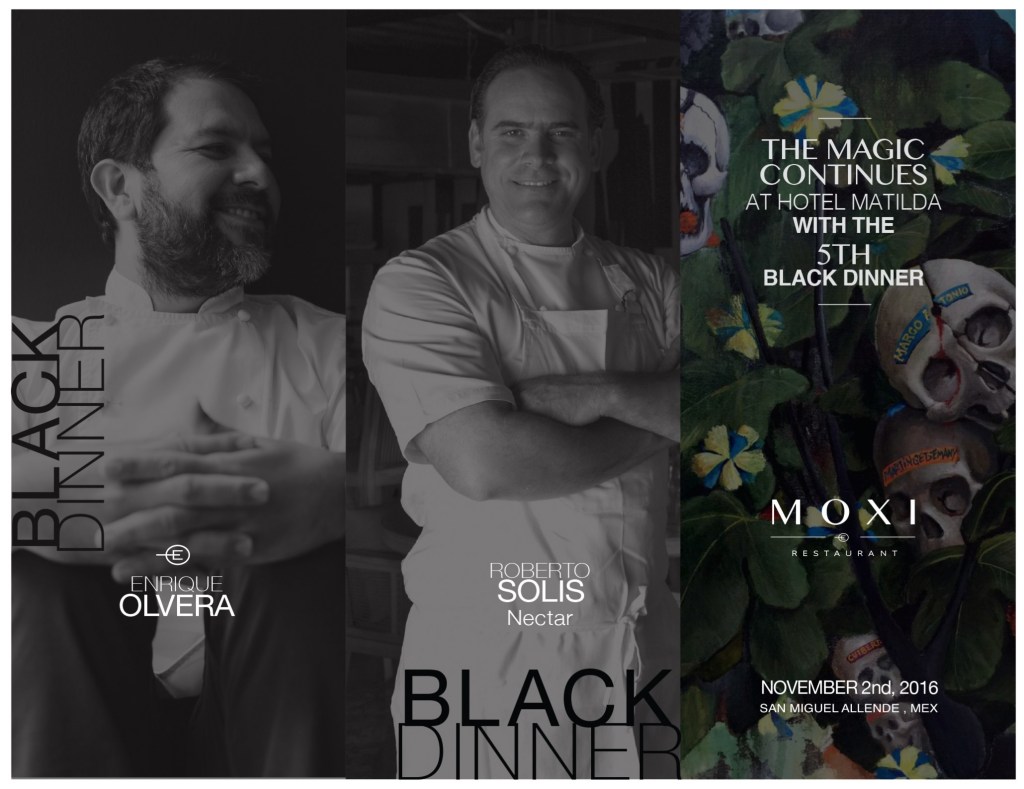 The Day of the Dead magic continues at Hotel Matilda. On November 2, 2016, Mexico’s internationally celebrated culinary master Enrique Olvera will be conjuring up a hauntingly delicious and creative culinary extravaganza for the hotel’s 5th-annual ‘Cena Negra’ (Black Dinner) – with the entire event being filmed by a major news organization. For 2016, the Cena Negra is taking the magic to the streets of San Miguel: The evening will begin with a cocktail party in one of the celebrated colonial destination’s charming plazas, Cuna 15, followed by a traditional ‘callejoneada,’ a procession through the streets to the hotel. A crew from CNN Mexico will film the entire event – from Cuna 15 to the parade along the cobblestone lanes to the multi-course dinner at Moxi – with the video shown on their newscasts and available for viewing on their website. Collaborating with Chef Olvera will be another of Mexico’s culinary stars, Roberto Solis, heralded for his interpretations of Yucatan cuisine. The Day of the Dead Black Dinner will be held at Moxi, Chef Olvera’s acclaimed restaurant at Hotel Matilda. “The inspiration to kick of our Cena Negra this year with a callejoneada came from Spectre’s blockbuster opening scene of James Bond at The Day of the Dead celebration in Mexico City,” said Bruce James, Director of Hotel Matilda. “Our own Day of the Dead procession through the streets of San Miguel will inject a new level of drama and exoticism into our exciting annual event.” The dinner will have six courses inspired by both Mexican food traditions and The Day of the Dead. The tables and décor in Moxi will be curated by Luis Fabián, proprietor of Casa Armida, an exclusive design boutique in San Miguel de Allende. Colorful and festive, El Día de los Muertos is the quintessential Mexican holiday with roots going back millennia. On The Day of the Dead, Mexicans celebrate their strong sense of love and respect for their ancestors. Loved ones, who are said to come back to visit on The Day of the Dead, are remembered and honored in numerous ways – from creating altars for them adorned with candles and photos, to special foods and colorful art work, to decorating gravesites with flowers and candles, to picnicking at the cemetery on the favorite foods of their loved ones. The 2016 Black Dinner at Hotel Matilda’s Moxi restaurant on Wednesday, November 2, 2016, costs $2,000 pesos (about US$100) per person including wine pairing; service is additional. For more information and to make reservations: eventos@hotelmatilda.com. Chef Olvera has enjoyed international recognition for his Mexico City restaurant, Pujol, which is rated #16 on the San Pellegrino list of the World’s 50 Best Restaurants, and more recently for his first New York establishment, Cosme – which received extensive news coverage recently when President Obama and the First Lady dined there. http://www.enriqueolvera.com/ Born in Mérida, the capital of the Yucatàn, Chef Solis has been a pioneer in creating ‘The New Yucatan Cuisine’ at his highly acclaimed Nectar restaurant in Merida, while earning international recognition by being invited to cook at famous restaurants in many countries. www.nectarmerida.com.mx Hotel Matilda is a trend-setting contemporary boutique hotel celebrated for its chic lifestyle-focused guest experience and one-of-a-kind art and culinary events. Hotel Matilda is located in the heart of 500-year-old San Miguel de Allende, the crown jewel of Colonial Mexico and an UNESCO World Heritage Site. For more information and reservations: toll free 855-MATILDA (855-628-4532) or info@hotelmatilda.com. www.hotelmatilda.com