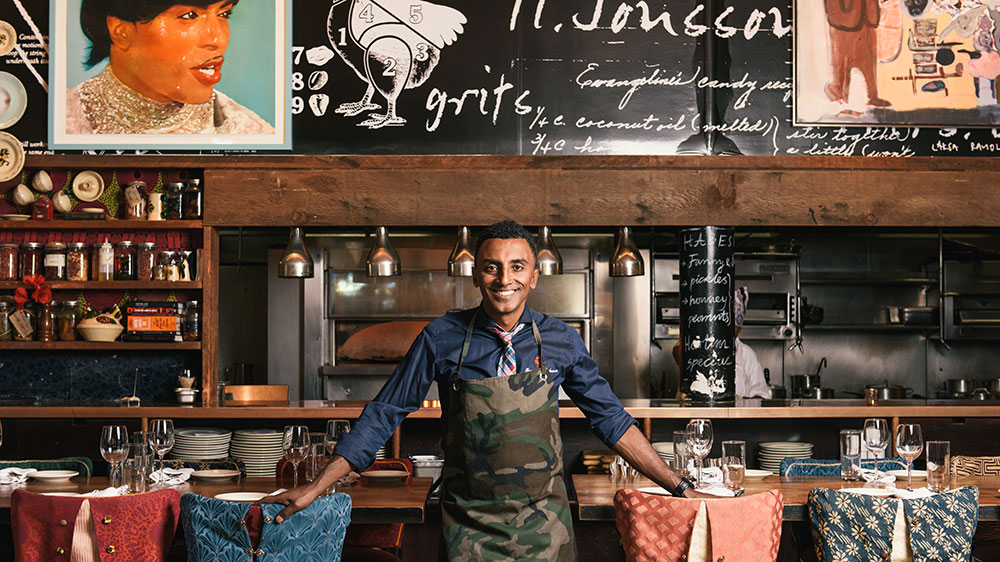 Marcus Samuelsson has always been a citizen of the world. The acclaimed chef was born in Ethiopia, raised in Sweden, and since the opening of his Red Rooster restaurant in Harlem, has become a culinary powerhouse in New York City. His global approach has continued throughout his career, with 2016’s opening of Marcus’ at Bermuda’s Hamilton Princess & Beach Club (where the cuisine is an island spin of the elevated comfort food he serves at Red Rooster) and now a new restaurant in Montreal. Marcus Restaurant + Terrace will debut with the dynamic Canadian city’s much-anticipated Four Seasons Hotel Montreal on May 8.

Of course, Montreal is a culinary powerhouse in its own right, and for Samuelsson, it was a matter of taking in the local experience—not just the food, but the culture and community, too—in order to create his newest outpost. “This is a city that you just really want to be a part of as a chef,” he says. “There has been an amazing boom here that has made Montreal one of the most exciting food cities in North America.” Though the French Québec city is heavy on classic French cuisine, Samuelsson’s latest project focuses on light and fresh fare, with a raw bar, a robata grill and a menu chock full of local oysters and fish charcuterie. “It was important to carve out something that added something to this vibrant city and gave people new choices,” he explains.

Two years of research in Montreal has made Samuelsson a bit of an expert on the city’s local scene. Here, the chef shares his local favorites, from his breakfast of choice to his go-to late-night hot spot.

“There are a lot of restaurants that have inspired me since I’ve been coming to Montreal, not just for their food and service, but for the way they engage with locals and celebrate the city. Antonio Park’s Park, which serves Japanese seafood and sushi, is one of them. So is Joe Beef. It’s amazing what David McMillan has done for Montreal with his restaurant. His kitchen has really transformed the city.”

“Because we in the restaurant industry work long hours, we end up eating at odd hours. Kim Lallouz’s fried-chicken-and-Champagne restaurant is open late and it’s just fun. It proves that everything doesn’t have to be super-curated to be great.”

“One of my favorite things in the morning is to go down to this bagel shop for their amazing wood-fired bagels. It’s a real institution—it’s been open since 1967—and their bagels are totally different than New York bagels. I start my morning off with them probably more often than I should.”

“When I go for a walk, I like to go by Habitat 67. It’s an absolutely amazing housing complex made of a bunch of cubes [designed by Israeli-Canadian architect Moshe Safdie]. The view of it from the river is just really incredible.”

“Of course, I’m excited about the opening of the Four Seasons. The brand is the premier standard of excellence. Everyone at the hotel—including the owner, who is from Montreal—is super-passionate about this city. It’s going to be the kind of place that locals come to all the time, whether for a meeting, a quick drink or a special occasion. It’s going to be a really exciting and social place for the city of Montreal.”

“I go to Bar George a lot because it’s close to my restaurant but also because the ambiance is great. It’s inside Le Mount Stephen Hotel. It’s in a really beautiful room with a big bar. The hotel is also great too. I have stayed there a lot over the last two years. It’s one of the more recent boutique hotels in the city.”

“I love Montreal’s street-art scene. It’s another one of those things that shows the city’s commitment to art and culture. There’s a beautiful mural of Leonard Cohen right outside of the Four Seasons that I really like.”