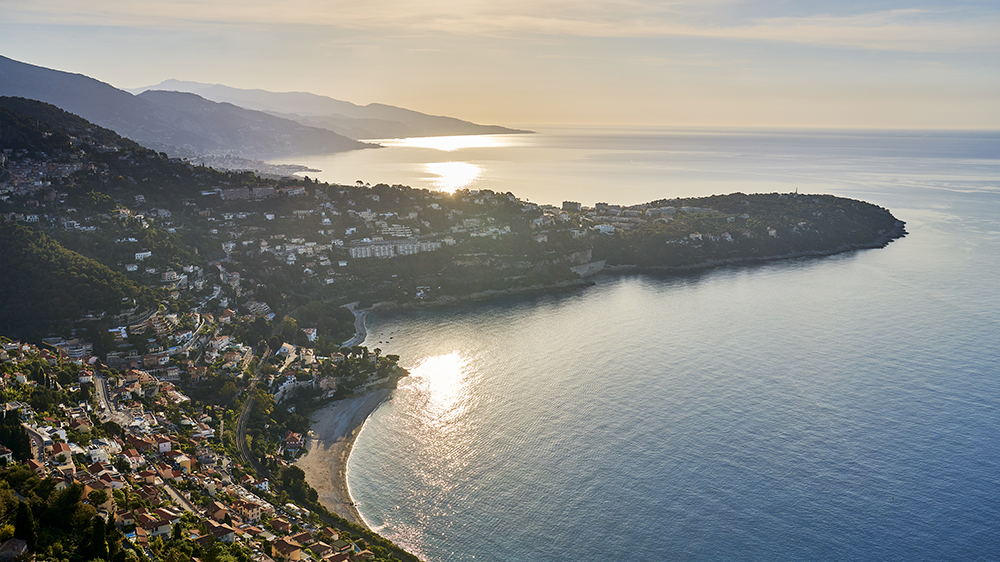 Long after you’ve checked out of the Maybourne Riviera, it’s the view that stays with you. On the precipice of a towering clifftop regularly circled by daredevil hang gliders, the French hotel’s balconies overlook the terra-cotta rooftops of Roquebrune-Cap-Martin, angling toward Italy on one side; from the other, residents can look down upon the denizens of Monaco—and you don’t often get to experience that.

Though it can be hard to turn away from such a panorama on the dazzling blue-sky days so typical of the Cote d’Azur, there’s plenty to admire within the property (rooms start from $915 per night, including taxes). Part of Maybourne Hotel Group—which also counts the Maybourne Beverly Hills and London’s Claridge’s, the Connaught and the Berkeley—the new build is, after all, competing with the likes of Oetker Collection’s Hotel du Cap-Eden-Roc and Monte-Carlo’s Hôtel de Paris. And those vistas alone aren’t enough to lure the superyacht set all the long way uphill.

The bedroom in a suite at the The Maybourne Riviera.  Richard Haughton

That means guests can expect superlative dining. Mauro Colagreco, of nearby Mirazur, which in 2019 topped the World’s 50 Best Restaurants list, oversees seafood restaurant Ceto; Jean-Georges Vongerichten will also have a presence here. Or stop by Le Piano Bar for one of its Paloma du Sud sundowners, with jasmine-infused tequila, lime juice and orange—a fitting accoutrement to the most spectacular sunsets.

The cigar terrace on the property with views of the Mediterranean.  Richard Haughton

Every enclave seems to hold some unexpected beauty. In the mammoth lobby, a gleaming Louise Bourgeois sculpture is suspended from the ceiling (aesthetes might also spot bulbous Bibendum chairs by one-time neighbor Eileen Gray) and museum-worthy art is everywhere. Threading it all together, the playful, modern interiors have been crafted by Maybourne favorites André Fu, Bryan O’Sullivan Studio, Pierre Yovanovitch and Rigby & Rigby.

Another standout space is distinguished by its natural charm. Loungers surrounding the infinity pool, many the same cheery orange as an Aperol Spritz, provide a reference point to a spectacular perspective: an endless, all-blue fusion of sky and sea. However you look at it, this setting is a showstopper.