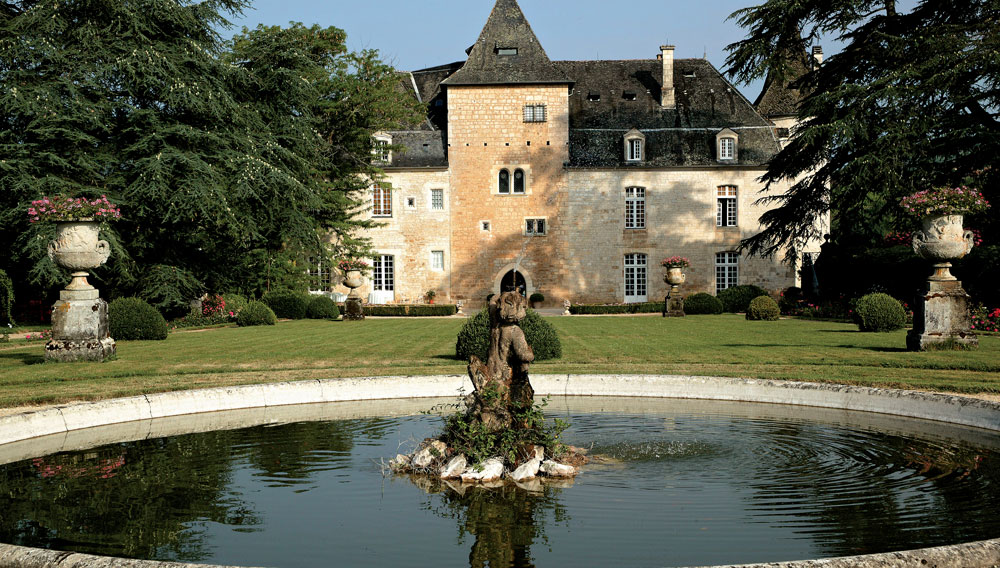 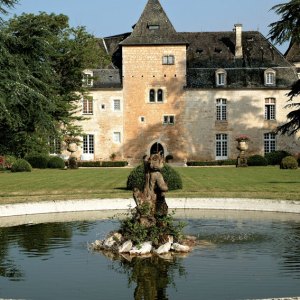 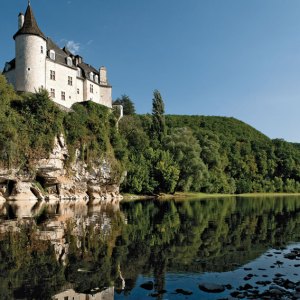 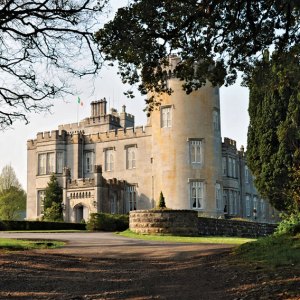 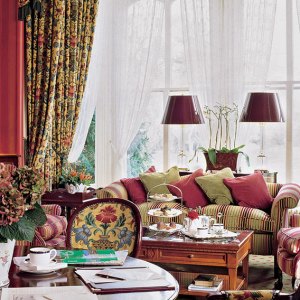 The crenellated battlements, tower rooms, and moats are just a few features that point to the reason for any castle to exist—security. It’s an architectural style meant to repel, but it also beckons; after all, an opportunity to sleep in a castle is irresistible, especially considering the histories found within the stone walls of such fortresses.

While these Medieval works of architectural art give credence to the old maxim that things aren’t built like they used to be—and despite the fact that many castles have endured through the centuries as tourist attractions and lodgings—surprisingly few have been sustained as grand showplaces where guests can pass a night in the utmost comfort. But it is still possible to have that baronial experience. Castles may have been built as places to retreat from invading enemies, but some now serve a similar purpose, though today they exist as sanctuaries from the distractions of a world moving faster than ever before.

An archetypal Medieval French fortress, Château de la Treyne (www.chateaudelatreyne.com) has it all: formal gardens, a surrounding forest, and a commanding perch over the Dordogne River; sumptuous accommodations; and a history that figures in some of the most important events in Europe’s recorded annals.

The earliest written records mention the building of a La Treyne fortress in 1342, and the seigniory, or fiefdom, changed hands under the usual circumstances of the time—inheritance, marriage, murder, cronyism, and so forth. One notable owner, Pierre de la Ramiere, lord of La Treyne in the late 1500s, was a leader in France’s Huguenot movement, and, as such, was a friend and comrade in arms with Henry of Navarre. Henry, who later became King Henry IV, gave up Protestantism to take the throne, reportedly remarking, “Paris is well worth a Mass.” In 1586, the castle, which was a Huguenot lair, was destroyed in a fire set by order of a lieutenant of Henry’s predecessor, Henry III. As a restoration proceeded through the 1600s, the owners must have taken a softer stand on their religious beliefs. The tower was lowered when it was decided a dungeon was no longer needed, and the La Treyne clan re-embraced Catholicism in 1701.

More recently, during World War II, some of the Louvre’s most valuable Egyptian antiquities were moved to La Treyne for safekeeping. The property has been owned by a succession of art lovers ever since. Currently, a Norman chapel on the grounds serves as a conference facility.

The castle itself has an air of exclusivity by offering just 14 guest rooms and two suites (rates range from approximately $240 to $1,045 per night). The restaurant has a Michelin star, and regional cuisine reigns—Quercy lamb, duck stew, truffles, and foie gras figure prominently on the menu. Activities include fishing, canoeing, and strolling the formal garden or the almost 300 acres of surrounding forest. The tranquil Dordogne landscape is worth exploring for its medieval villages and the Lascaux caves. Should one wish another type of getaway, hot-air ballooning also is available.

In contrast to the château’s 16 accommodations, Dromoland Castle (www.dromoland.ie) in County Clare, Ireland, contains 99 guest rooms and suites within its blue limestone walls (approximately $320 to $1,835 per night). Located about eight miles from Shannon airport and 19 miles from Limerick, the castle is surrounded by 410 acres that include an 18-hole golf course and are home to a variety of wildlife, including red deer, pheasant, and partridge. As such, the list of activities offered is extensive, and includes falconry, clay shooting, archery, and fishing. Inside, castle lovers will find the de rigueur suits of armor and tasseled drapes juxtaposed with the modern amenities of a six-treatment-room spa. Afternoon tea is served daily in the drawing room, and the lord of the manor’s octagonal study, situated beneath a round tower, is now a cocktail lounge, eminently suitable for a warming postprandial whiskey by the fireplace. Diners seeking a casual ambience and local fare, such as Irish lamb stew or glazed pork belly with black pudding, will be well served at the castle’s Fig Tree restaurant, whereas the more formal Earl of Thomond offers such dishes as braised black sole in Champagne sauce.

Dromoland is the ancestral home of the O’Brien clan—a family descended from Brian Boru, the king who ousted the Vikings in 1014—making them one of the few native Gaelic families with royal blood. Accessible by a long, curving driveway that meanders around a lake, the original, hulking castle was built in the 16th century, though it was redesigned and rebuilt in the early 1800s. So beloved is the historic estate that in the early 1900s, when the IRA in Dublin targeted the castle for destruction, the local IRA leaders successfully convinced the Dublin group to drop the idea, stressing that the owners had always been benevolent landlords.

It’s only fitting that a former hunting lodge would employ three fisherman to provide a steady supply of trout for guests at lunchtime. Schloss Fuschl (www.schlossfuschlsalzburg.com), just outside Salzburg, Austria (about 10 miles from the city’s central train station), and in a picturesque lakeside setting facing the Alps, traces its origins to 1450, when it was built as a summer residence and hunting lodge for the archbishop of Salzburg. As such, it’s doubtful that this castle was ever considered rustic, but it provides a proper base for outdoor pursuits and a splendid backdrop recognizable to anyone who watched Julie Andrews dance and sing her way through The Sound of Music.

In addition to the activities afforded in such a setting—boating, swimming, hiking—the hotel has sole fishing rights on the Fuschlsee and a fishery that guests can visit. There is a nine-hole golf course on the property, a spa, and a collection of about 150 Old Master paintings hanging on the walls. Guests also have access to a fleet of vintage cars whose ranks on a given day might include Rolls-Royces, an Austin Healey, an Alfa Spider, or an MGB.

Schloss Fuschl became a hotel in 1977, and it was completely refurbished in 2006 as a Starwood property. With its 110 rooms, suites, and lakeside cottages, it is one of the largest castle-hotels appointed with luxury accommodations in Europe, though it closes for the winter and reopens at the beginning of May (approximately $375 to $3,390 per night). The castle’s two restaurants allow guests to choose between formal dining or relaxing outdoors for a more casual meal on the jetty overlooking the lake. There is also a wine vault for private events and a bar/cigar lounge.

One for the Middle Ages

The observance of a landmark’s umpteenth anniversary is such a commonplace practice; it’s hardly worth noting. Accordingly, it’s easy to be blasé about a 500-year-old castle, after seeing a few. But when a property marks nine hundred years of existence, well, that’s something a bit more special.

When Amberley Castle (www.amberleycastle.co.uk) in West Sussex, England, reached its 900th birthday back in 2003, the owners decided to build an 18-hole putting course to mark the occasion. Other recent additions include the Mistletoe Lodge, a thatched tree house that serves as an intimate private dining area and is accessible only by a rope bridge. When not walking the meticulous formal gardens within the castle’s walls, revelers in Amberley’s 19 rooms and suites (approximately $300 to $820 per night) can feast on seasonal offerings of a variety of game and fish, reflecting the rural fortress’ proximity to the sea.

Beyond such genteel pastimes, however, the castle has all the accoutrements of a Norman-era fortress. The original structure was fortified to protect the bishops of Chichester, whose luxurious lifestyle back in the Middle Ages was duly noted by pirates and thieves. The castle fortifications include a 60-foot curtain wall (the perimeter wall) and a dry moat. Contrary to popular belief, moats were not always filled with water; the dry versions were commonly used and were difficult to span because they were dug deep and had steep sides. The decor—tapestries and suits of armor accentuating the narrow, arched lancet windows and multiple fireplaces—is exactly what most guests expect from a castle. And each midnight, the portcullis slowly lowers shut, securing the residents for the night.