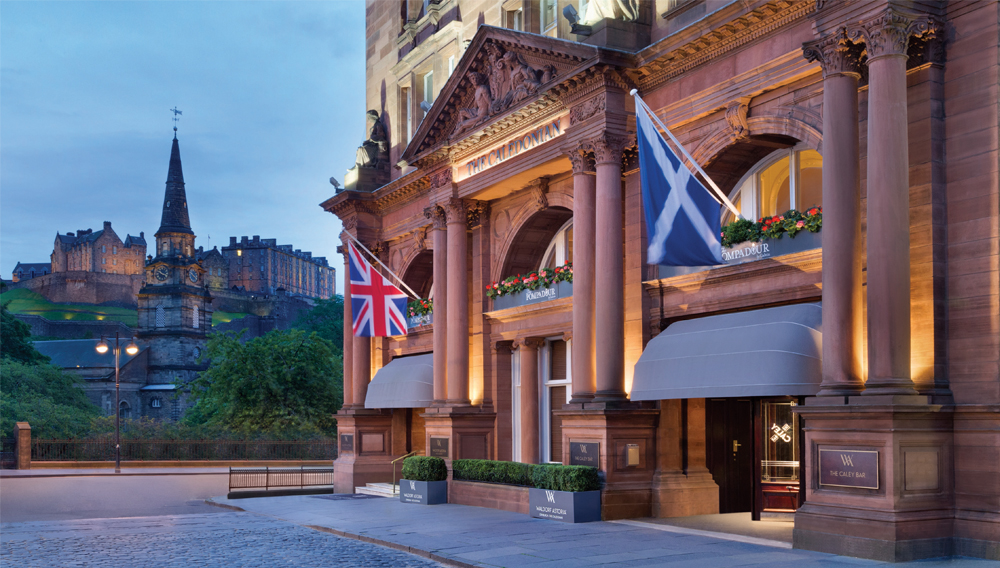 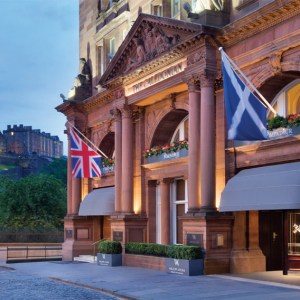 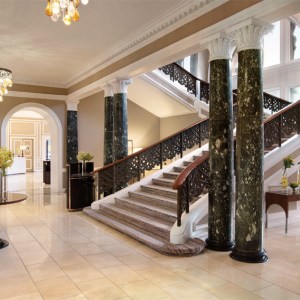 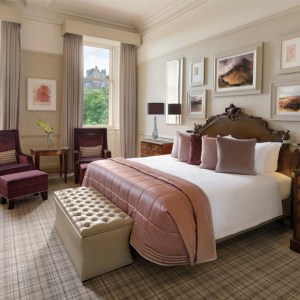 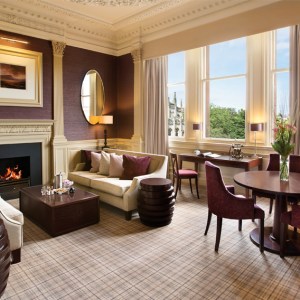 The Robb Report Club transported members to Scotland for a luxurious journey that featured a stay at the Caledonian. This historic Edinburgh railway hotel was reborn as a luxury destination following a more than $40 million investment and renovation by Waldorf Astoria Hotels & Resorts.

Upon arrival, guests transferred to the Waldorf Astoria Edinburgh, the Caledonian, which sits in the shadow of Edinburgh Castle. Still commonly called “the Caley” by the locals, the hotel first opened its doors in 1903 as part of the Princes Street railway station. Once one of Edinburgh’s most luxurious hotels, it fell into disrepair after the station closed in 1965. Thanks to Waldorf Astoria, though, the hotel has now reclaimed its place as Edinburgh’s grande dame. The brand transformed the fifth-floor servant’s quarters into decadent suites with sloped ceilings. Peacock Alley, the former concourse and ticket office for the station, now serves the city’s finest afternoon tea. The Michelin-starred Galvin brothers run the hotel’s bistro, Galvin Brasserie De Luxe, and fine-dining restaurant, the Pompadour by Galvin, which serves French cuisine in a magnificent belle epoque setting.

The Robb Report Club adventure began with a three-day spree in Edinburgh, with highlights that included tea on the royal yacht Britannia, a performance by the BBC Scottish Symphony Orchestra at Usher Hall, and a guided walking tour of Edinburgh Castle and the Royal Mile. During their stay at the Caledonian, guests also enjoyed an exquisite private dinner in the Trianon Suite of the Pompadour by Galvin, spa treatments at the hotel’s Guerlain spa, and a cooking class with the restaurant’s executive chef, Craig Sandle. For a grand finale, the Caledonian staged a farewell miniature Burns supper, complete with pipers, a ceilidh band, and a performance of Robert Burns’s classic song “Auld Lang Syne.”

The next leg led club members north to the Speyside region and the whisky distilleries of William Grant & Sons, where they spent three days exploring the surrounding countryside and taking private tours of the Glenfiddich and Balvenie distilleries to sample single-malt Scotch whiskies. Other activities included skeet shooting at the House of Mulben, a tour of Ballindalloch Castle, and a visit to Johnstons of Elgin, an 18th-century woolen mill renowned for its incredible cashmere. The voyage concluded back at the Caledonian’s wood-paneled bar with a casual farewell dinner and a final dram of whisky (or two).