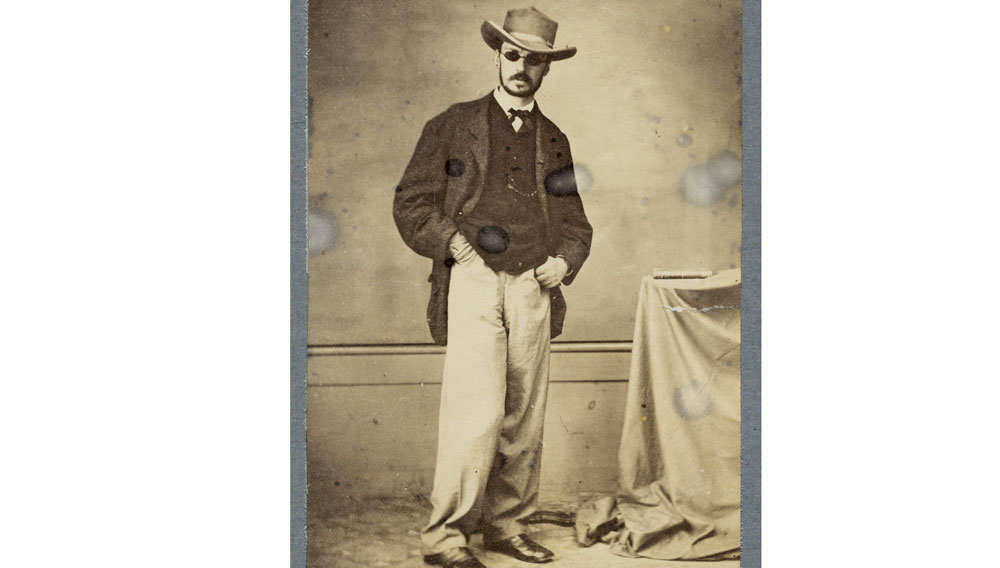 Some undertake a journey to broaden their intellectual horizons, to enrich their perspectives; others trek from place to place to find refuge from circumstances—or from themselves. Shortly after Christmas 1865, a young man sailed from the port of Belém in Brazil for Boston, completing an excursion that began with the latter purpose yet ended with the former.

Though William James (pictured) had finished his first year at Harvard Medical School in 1864, he found the prospect of becoming a physician uninspiring, and medical science something of a humbug. Such a career, he feared, would come at the expense of what he termed his “higher nature.” To rescue this faculty from peril, he decided to accompany Louis Agassiz, the famous Swiss-born U.S. naturalist, on an expedition to capture and classify undiscovered species of fish in the Amazon River.

Sudden shifts of direction were not unusual for James, whose family had conditioned him from an early age to a frenetic and peripatetic existence. His paternal grandfather, for whom he was named, arrived in the United States after the American Rev­olution and amassed a fortune that, at the time of his death in 1832, was reckoned by an Albany newspaper at $3 million—a sum sufficient to make him the richest man in New York after John Jacob Astor. Upon receiving his inheritance, William’s father, Henry James Sr., is said to have pronounced himself “leisured for life,” but he gave his family little opportunity for leisure. The eccentric Henry Sr. habitually changed addresses, countries of residence, and tutors for his brood, which also numbered Henry Jr., the future novelist; Alice, whose diaries later proved a fruitful source of filial information; and two other sons. In 1855 he removed the family to Switzerland, convinced by his theories of education that the best schools were found there; but no sooner had the Jameses settled in than he declared Swiss institutions overrated and transferred the household to Paris, then London. Of her father’s disorganized methods, Alice later lamented, “What enrichment of mind and memory can children have without continuity and if they are torn up by the roots every little while as we were!”

William, who believed this haphazard instruction had left him an “obscure little ignoramus,” encountered resistance from his father in every choice of métier. When he indicated an interest in becoming a painter, his father bought him a microscope and enrolled him in science courses. To “allow [William] to tumble down into a mere painter,” Henry Sr. said, “was impossible.” Yet the elder James need not have worried: Not long after defiantly joining a studio, William—during one of the bouts of depression that recurred throughout his life—withdrew. Even William’s acquiescence in taking up scientific studies at Harvard did not entirely please his father, according to Henry Jr., who observed that for Henry Sr., any particular choice of occupation was a surrender—a narrowing of identity that stifled potential because it “dispensed with any suggestion of an alternative.”

The sojourn to Brazil was an alternative that appealed to William, but his initial excitement was short-lived. During the voyage, he found himself, “body and soul, in a more indescribably hopeless, homeless and friendless state than [he] ever [wanted] to be in again.” Even his enthusiasm for the wonders of Rio de Janeiro soon gave way to despondency. An attack of fever hospitalized him, and dark, suicidal thoughts “of the pistol, the dagger and the bowl” prompted his decision to return to the United States. Quarantine, however, prevented this, and he spent the remainder of the year on the river.

Yet the more important journey took place on the currents of his own stream of consciousness. Before leaving Boston, he had said to himself, “You will learn to know yourself and your resources”; and in the lush and dangerous wilderness, he did. “I am convinced now, for good, that I am cut out for a speculative rather than an active life,” he wrote his father, who doubtless recoiled at this surrender of possibilities. The object of his speculations, William knew, would be to map the terrain of his own turbulent emotional landscape—a pursuit that, decades later, as the United States’ preeminent psychologist and philosopher, placed him among the most influential intellectuals of his time. The true alternatives, he realized, were few: “Men’s activities are occupied in two ways: in grappling with external circumstances, and in striving to set things at one in their own topsy-turvy mind.”