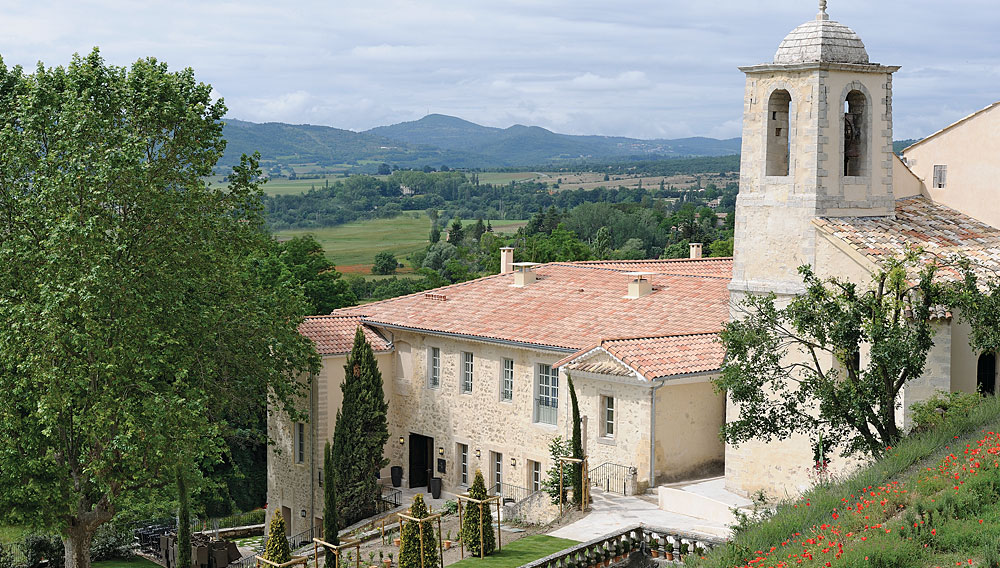 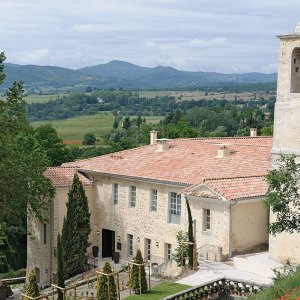 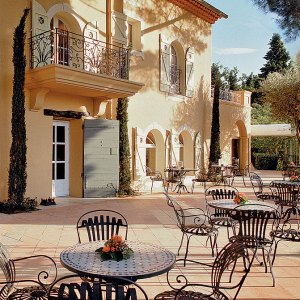 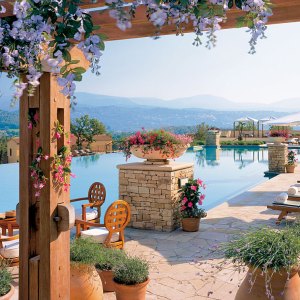 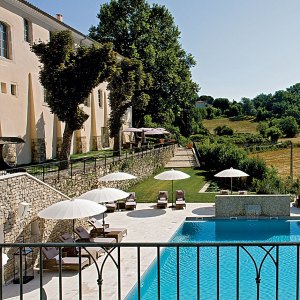 If God lives in Italy, then he vacations in the south of France—or so the Provençals say. Such superlatives, however, pass almost without notice in this land of blue skies, lavender fields, olive groves, and vineyards, all of which—after disembarking from an 11-hour transatlantic flight—I have watched roll by during a two-hour taxi ride from Marseille to the Alpes-de-Haute-Provence. As the snaking roads wind past a succession of spectacular sights including medieval churches, fortresses, and hilltop villages, my jet-lagged brain and sore muscles crave only the simplest of pleasures: water, life-giving water.

Happily, my destination is the L’Occitane spa at the four-star Le Couvent des Minimes Hôtel & Spa—a former monastery that made the transition first to a convent and finally to a boutique hotel. Built in 1613, the 15-acre estate has been a place of healing and tranquility for centuries. Much like the Franciscan nuns who, during the 19th and 20th centuries, took respite here between missions, I have come to calm my mind, body, and soul. And unlike the 17th-century Minime monks—who sought inner peace through fasting, humility, and punishment—I have come to eat, drink, and be pampered.

“That’s it,” says my driver, pointing to a rambling stone structure of turrets and bell towers atop a hill that rises from sweeping pastures. Approaching the property’s entrance, I notice the Stations of the Cross, a vestige of the hotel’s former incarnation. In 2007, during an extensive renovation that converted the main building’s 77 tiny cells into 46 modern guest rooms, all other religious symbols were removed by the Church. The occupants of the cemetery on these now-deconsecrated grounds were also removed, though the headstones remain nestled within a grouping of rosebushes in the garden. Also intact are the cloister courtyard; the interiors of the former church (located on the second floor and now used for private events); and the bell tower, which houses the one-bedroom Cassine suite, the only guest room that—with its vaulted ceiling, heavy fabrics, and traditional furnishings—diverges from the hotel’s neutral-toned contemporary decor.

After checking in, I wander downstairs to the L’Occitane spa, don a terry-cloth robe, and sip a glass of cucumber-infused water. This inviting retreat’s two sunlit floors incorporate a Turkish hammam, a steam room, and a heated indoor swimming pool that is separated by a glass wall from the pool outside. Glancing at the spa menu, I am tempted by the 30-minute chromatic bath—a relaxation therapy that involves submersion of the entire body, except for the face, in warm, scented water into which music is pumped, while hydrojets massage the muscles and colored lights glow overhead. But I opt instead for a more regional experience: the Provencal Indulgence. This treatment begins with an effervescent foot bath laced with mint, pine, and rosemary oils, and is followed by a vigorous body scrub, a rain shower, and a lemon

verbena–scented massage that targets all areas of tension and muscle pain.

Unlike some health resorts in the United States—many of which specialize in calorie-restricted diets, rigorous exercise regimens, and fad therapies such as antiaging caviar facials and four-hand, diamond-dust massages—Le Couvent des Minimes maintains a tranquil, unassuming, and unhurried atmosphere. Guests may enjoy a massage, a swim, or a sauna before a leisurely petit déjeuner in the hotel’s open courtyard. One can easily lounge the entire day on the grounds above the cobblestone-paved town of Mane without feeling as though the time should be more productively spent. The more ambitious guest might spend several days exploring the rest of the Luberon region, visiting wineries and olive-oil producers, or bicycling among the area’s famed lavender fields.

With its pleasing colors, scents, and flavors, the entire Provence-Alpes-Côte d’Azur region—which, as its name suggests, encompasses Aix-en-Provence, Avignon, much of the French Alps, and the Côte d’Azur—is naturally suited to restorative pursuits. In 123 BC, Roman proconsul Sextius Calvinus, who founded the city as a military outpost, built the baths of Aquae Sextiae for his wounded soldiers on the site of Aix-en-Provence’s thermal springs. Celto-Ligurian women later bathed in the naturally warm springs after giving birth, believing the water had healing powers.

Today a 32,000-square-foot hydrotherapy spa stands on the ruins of Sextius’ complex. Upon entering the reception area of the Thermes Sextius spa, guests view through glass tiles and windows what remains of the roughly 2,000-year-old Roman baths, most of which were rediscovered in the late 1980s during a major renovation. The facility offers its daily average of 150 guests an extensive exercise center and an assortment of water features, including mud baths, a Turkish bath, a hydromassage bath, an aquatic exercise pool, indoor and outdoor swimming pools (open May to October), and two indoor plunge pools—one maintained at 79 degrees Fahrenheit, the other at 97 degrees. Those seeking more intimate quarters should visit the candlelit Institut du Cours nearby, a six-room spa that features an eclectic mix of Moroccan, Turkish, and Balinese elements.

While Aix-en-Provence is renowned for its curative waters, the Côte d’Azur’s reputation rests on its beaches. More than two centuries ago, health seekers began to flock to the Côte d’Azur’s sunny shores, quickly establishing the French Riviera as Europe’s premier winter health retreat—a distinction that, given the increased competition around the world, the region now works hard to maintain. Because French law prohibits new construction on the seashore, most of the great coastal hotels do not offer large-scale spas; yet their attention to detail and amenities often make up for limited space.

“In America, everything is very structured, and it’s all about the procedure,” says Sophie Volant, director of sales at the illustrious Hôtel du Cap Eden-Roc in Cap d’Antibes. “In the south of France, it’s much more relaxed. When people come here, they become children again. They brush up on their tennis, swim in the seawater pool, even jump into the ocean from the diving boards and gymnastic rings we have suspended over the water.” Guests at Hôtel du Cap Eden-Roc can also indulge in Swiss antiaging facials, an assortment of body treatments by La Prairie, and a workout at the small wellness center located in the estate’s rose garden. Treatments can be arranged in the private cabanas for rent along the water as well.

Farther down the coast in Saint-Tropez, the two-year-old spa at Hotel Byblos offers guests a Turkish bath and a Moroccan-style relaxation space with wood panels imported from a 16th-century Lebanese palace. This boutique facility is located just off the recently renovated swimming pool, which, from its hilltop planted with tropical foliage, looks out to the sea. A restful day spent poolside, with easy access to an open-air bar and café, might culminate with dinner at the restaurant Spoon Byblos by Alain Ducasse and drinks at Les Caves du Roy, the hotel’s nightclub.

Guests of the 36-room Château de la Chèvre d’Or, located between Nice and Monaco, can take in sunrise yoga and meditation in the property’s sculpture gardens—a fanciful arrangement of life-size animal figures, rosebushes, jasmine, lavender, and olive trees that, like the Jardin Exotique in Monaco, hugs the side of a cliff high above the Mediterranean. Other wellness amenities at the Château, which occupies the remains of an 11th-century medieval village, include a heated swimming pool, an outdoor hot tub, a hammam, and a sauna. An on-call massage therapist who specializes in reflexology and Indian massages treats guests either in their rooms or in a private one-room garden retreat.

As relaxing as these therapies may be, however, the Chèvre d’Or’s most invigorating treatment may be of the gastronomic kind. The hotel’s two-Michelin-starred chef, Didier Elena, challenges the definition of a three-hour restorative with his playful approach to classic French cuisine, offering a spring menu that features such locally grown produce as baby artichokes, tomatoes, and asparagus.

Culture and gastronomy are also as much a part of the wellness package as the spa at Château Saint-Martin & Spa in Vence. Located beyond the drawbridge and towered wall that recall its origins as a fortified Roman stronghold, the hotel was the property of the Knights Templar in the 12th century. Visitors today have access to a host of amenities, among them manicured gardens, red-clay tennis courts, an infinity swimming pool overlooking the gardens, private wine tastings in the cellar, and a gourmet restaurant whose chef, Yannick Franques, recently earned his first Michelin star. Like Hôtel du Cap Eden-Roc, its sister property in the Oetker Hotel Collection, Château Saint-Martin has opened a spa with La Prairie treatments.

The most state-of-the-art spa in the region, however, can be found about a half-hour’s drive inland from Cannes at the 114-suite Four Seasons Resort Provence at Terre Blanche, which also boasts two 18-hole golf courses on its 660 private acres. The two-level spa opened in 2007 and houses a world-class fitness center staffed by personal trainers, cosmetic experts, and qualified specialists who conduct health assessments.

After spending a day at the spa working out with a physical trainer, swimming in the heated indoor swimming pool, and receiving a deep-tissue massage, I settle into the resort’s two-Michelin-starred Faventia restaurant. Here, while enjoying a serving of Aquitaine caviar with a glass of rosé, I watch the sun dim as it gradually sets behind the shadow-draped mass of the Alps. As the final beams of light sink, I decide that, after all, I can indeed imagine God vacationing in Provence.