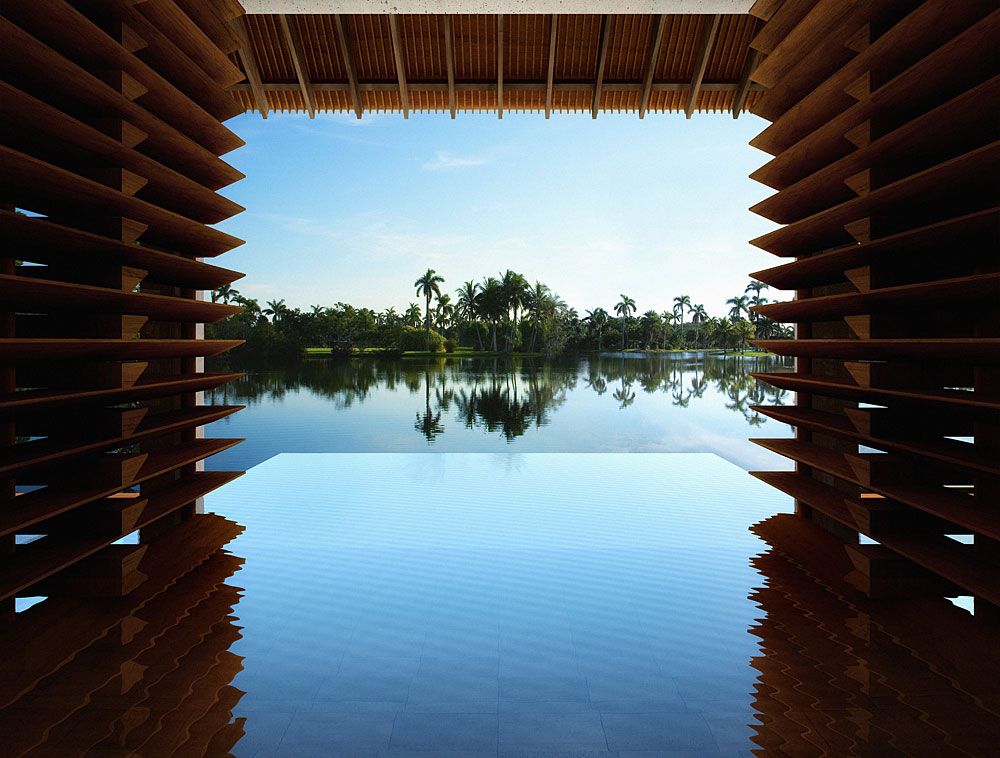 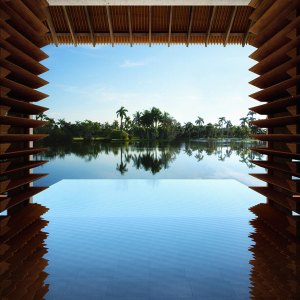 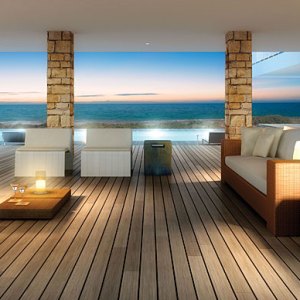 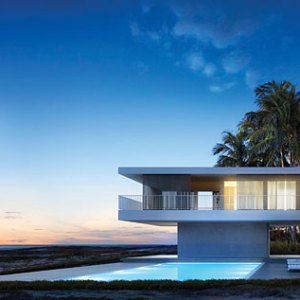 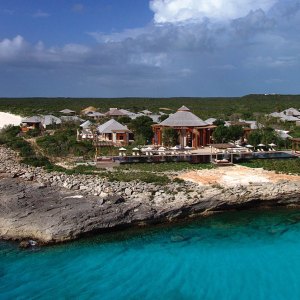 For the past several decades, Caribbean design has been as predictable as the northeast trade winds: Georgian columns, vine-covered pergolas, vaulted ceilings. But suddenly it is taking a turn for the contemporary. On Dellis Cay, a 560-acre private island in the Turks and Caicos archipelago, for instance, seven top architects are bringing their sophisticated, up-to-date styles to bear on a new master-planned resort community, which will include villas and other ownership properties when it opens in 2009. “Dellis takes the new paradigm to the furthest degree,” says Miami-based architect Chad Oppenheim, who is among the seven designing the project.

Oppenheim, his Dellis colleagues, and other 21st-century arbiters of style are revolutionizing the appearance of Caribbean properties, bringing modern sensibilities—and materials—to the best of the island aesthetic. The winds continue to blow, but they are carrying change.

In the Caribbean, real estate developers, architects, and interior designers are responding to the expectations of vacation homebuyers, who, as a group, seem to have grown younger in recent years and who likely have been exposed to a wealth of exotic vacation experiences. (According to the Mendelson Affluent Survey, the number of Robb Report readers under age 40 who own vacation properties—fractional or wholly owned—has grown by 33 percent in the last three years.) The prospect of holing up in a charming but dated Caribbean cottage—characterized by a pitched Spanish tile roof, wooden shutters with vented slats, and an overabundance of wicker—might not be so enticing to someone who has snacked on faaga riha in a modern, over-the-water villa in the Maldives or has cooled off with an iced apokat (a crushed avocado and chocolate-syrup concoction) at one of the stylish new resorts on the terraced hillsides of Bali. Thus the Caribbean’s newest residences and those that are being planned showcase modern, internationally influenced designs.

Vestiges of traditional island design do remain, however, and intentionally so. “I am going to incorporate some traditional elements,” says Oppenheim of his work at Dellis Cay. “It is important not to throw away 50 years of Caribbean resort design. When integrated with a modern sensibility, you will get a sense of timelessness.”

The villas on Dellis Cay, which are scheduled for completion next year, may well prove to be timeless—and boundless, so to speak. “This is what these villas are all about: bringing the natural world in and playing with the rhythms—the sun, moon, and wind,” says Oppenheim, who, like the project’s other architects, was hired by Dellis Cay’s developer, the Vienna-based O Property Collection, in 2005. (The others are Stirling Prize winner David Chipperfield; Shigeru Ban, designer of the Centre Pompidou in Metz, France; Zaha Hadid, recipient of the 2004 Pritzker Prize; Italian designer Piero Lissoni; Singapore-based designer Carl Ettensperger; and Tokyo-based architect Kengo Kuma.)

Oppenheim’s contribution to Dellis Cay is a collection of so-called treetop villas that, he says, will appear to float atop mature palm trees; a large infinity pool adjacent to each villa will enhance the effect. Floor-to-ceiling windows will overlook expansive terraces on either side of the long, elegant buildings and provide panoramic views of the Caribbean.

Lissoni, who is designing the interiors of 54 beach houses and 17 villas, as well as 24 residences within a Mandarin Oriental hotel at Dellis Cay, also will incorporate floor-to-ceiling windows, which will make the palms that sway outdoors an integral part of the living room. The shape of Ettensperger’s over-the-water villas (the Caribbean’s first) will mimic the natural curve of the shoreline, and, like Oppenheim’s villas, each will have its own infinity pool.

On the 35-square-mile island of Anguilla (the Latin word for “eel,” which the shape of the island resembles), a Viceroy hotel and 140 resort residences, which are scheduled to be completed this year, occupy 35 acres of bluffs and shoreline along Barnes and Meads bays. The two-story beachfront homes, which are ringed by palms, display clean, contemporary facades—straight, simple walls holding the enormous windows that provide views of the sea from both floors.

Kelly Wearstler, a Los Angeles–based interior designer, conceived the villas’ interiors, employing an abundance of natural materials such as wood, stone, rattan, and rope. “I was inspired by the beach setting,” she says, “but I used materials and techniques from all over the world: hammered metalwork from India, bead artwork from Africa, and hand-carved wood pieces from Asia.” Coral and limestone figure prominently in the Viceroy’s more than 15,000-square-foot, Jean-Michel Gathy–designed spa, because Anguilla is made of the materials (unlike the many Caribbean islands that are volcanic in origin). But like the villas, the spa’s interior, conceived by Wearstler, features elements of Eastern design, and the treatments will draw from therapies practiced in China, Bali, and Thailand.

Thailand could be the setting for Amanyara, which opened in 2006 on the Turks and Caicos island of Providenciales, on a 99-acre site between a national park and a nature preserve. With mahogany trees rising from planters submerged in the ornamental reflecting pool in front of the reception hall, the property bears a striking resemblance to the Singapore-based Amanresorts group’s first resort, Amanpuri, which opened in Phuket in 1988. Amanresorts is planning to build an additional 11 villas at Amanyara next year. The new villas should resemble the existing ones, which feature teak furniture, sand-toned terrazzo flooring, and views of a 1.5-mile-long stretch of beach and of coral bluffs.

“The Aman approach was very successful in Asia,” says Michel Neutelings, COO of Caicos Resorts, Amanyara’s developer. “Amanyara brings the concept to the West, close to some of Aman’s biggest fans on the East Coast of the United States.”

Amanyara (aman is Sanskrit for “peace,” yara is the Arawak word for “place”) has a cloistered, Zen-like ambience that would satisfy a rishi and, one imagines, the resort’s architect, Jean-Michel Gathy. Amanyara was his fourth Aman project. “[Gathy] really wanted to understand the site and even lived in the bush for a period of time,” says Neutelings. Thus, he adds, “the villas are integrated with the environment. There is no nonnatural vegetation.”

Gathy situated the existing villas amid the cacti and wild orchids in such a way that the structures are hidden from beachgoers. But through the 10-foot-high sliding glass doors of the master villa (each residence is a minicompound with a master villa and guest villas separated by wide lawns), the ocean view is completely unobstructed.

For decades, creating low-impact, organic-style architecture—a staple of the new design paradigm—has been a focus of Rosewood Little Dix Bay resort, on Virgin Gorda in the British Virgin Islands. Founded in 1964 by environmentalist Laurance Rockefeller, the resort remains in harmony with its natural environment, according to Richard Finnegan, director of the architectural firm Roger Downing & Partner. (RDP has been involved in the resort’s design since 1969.) “Roger and I are great fans of Frank Lloyd Wright, and so many of his ideas about long, horizontal buildings have been incorporated into the resort and villas,” says Finnegan. Today, construction at Little Dix is yielding villas priced at about $3.3 million. “Global contemporary architecture today usually means green,” adds Finnegan. “A great deal of time is spent sitting the buildings to reduce road and excavation impacts and to prevent silt runoff and damage to the reef.”

The decor at Little Dix is more traditionally Caribbean—three-panel louvered windows, Parsons-style furniture, hurricane lamps—than that at the newer resort communities in the region. Nevertheless, Finnegan seems to suggest, Little Dix is no stranger to modernity. “Frank Lloyd Wright is still considered contemporary by many,” he says, “and we feel that the open plan helps make the spaces feel bigger and connects them to the exterior. Keep in mind, Laurance Rockefeller was a forward-looking client, so a lot of the ideas of [that] day are compatible with the now accepted contemporary global style.”

If Finnegan sees less of a paradigm shift than do some of his peers, he acknowledges that “interiors have become very contemporary, with lots of bright white furniture, stainless steel appliances, and modern light and bathroom fixtures.” For homebuyers who are not entirely ready to join the modern revolution, Little Dix remains a stylish and comfortable alternative.