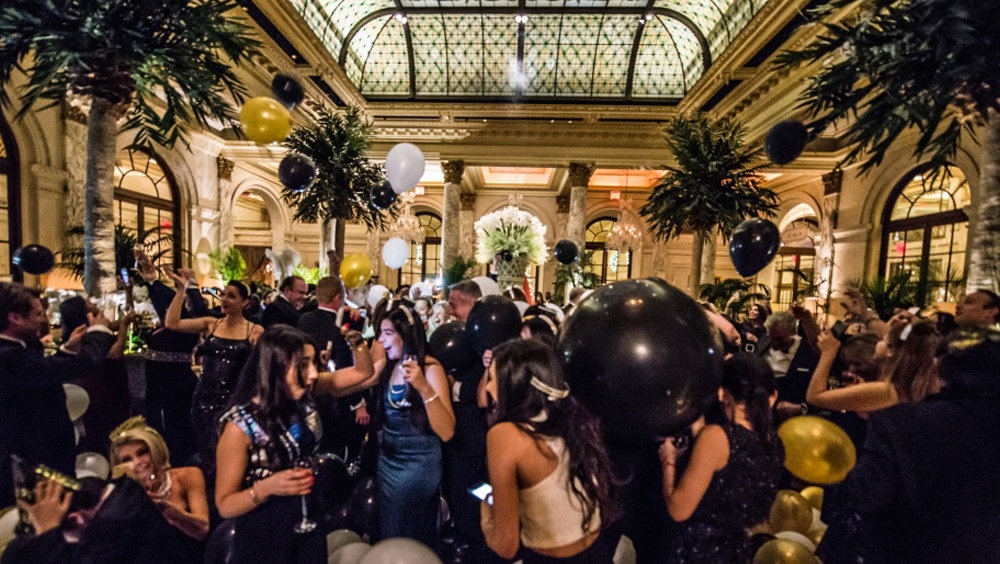 Photo: Courtesy of the Plaza

Cramming into Times Square to watch the ball drop is certainly not everyone’s idea of a good time. Thankfully for those of us who want to skip out on that televised tradition, New York leaves us spoiled for choice on New Year’s Eve. From elegant jazz bars to chic cocktail parties and black-tie galas, we’ve tracked down most fabulous places to ring in the New Year in New York City (don’t worry, reservations are still available!), without a barricade or tourist in sight.

Once home to the New York Stock Exchange, Cipriani Wall Street has evolved from a temple of capitalism to a glamorous event venue, hosting some of the most high-profile affairs in the city. The iconic landmark offers a window into Manhattan’s charming past; an era where men styled suits with hats and women wore glitzy gowns for a night out on the town. This year, in classically formal fashion, Cipriani’s New Year’s Eve bash will involve black-tie attire, bellinis on arrival, and a four-course Italian dinner at Club 55 Restaurant. Followed, of course, by dancing and prosecco on tap.

Ian Schrager’s Public Hotel swiftly ascended to the top of the nightlife scene when it opened last fall, and to top off a year filled with star-studded parties and NYFW events, it’s bringing one of London’s most revered cocktail bars to New York. From December 29th-31 its Diego lounge will be taken over by Coupette – East London’s coolest new drinking spot (it clocked in at eighteenth on the World’s Top 50 Best Bars list for 2018). For just three nights, bartenders from Coupette will be serving five of their signature drinks, which involve lesser-known French ingredients such as calvados and poiré. Before midnight on the 31st, champagne piña coladas will be served for the toast and Jean-Georges Vongerichten will be directing the culinary offerings throughout the evening.

Inside Diego at Public  Photo: Courtesy of Public

Upper East Side elegance is immortalized at the Carlyle, a Rosewood Hotel – the preferred New York address of the royals and high society for almost 90 years. Continuing an annual tradition, Café Carlyle will be hosting its black-tie gala on New Year’s Eve with a live performance by Steve Tyrell and a prix-fixe dinner, followed by dancing in the lobby with the Peter Duchin orchestra. Things will be just as fabulous at the hotel’s famed cocktail bar, Bemelmans, which will be serving champagne and cocktails with appropriately jazzy music from the Loston Harris Trio.

While the Top of the Rock is an undeniable tourist trap, the Rainbow Room and the adjoining Bar SixtyFive are establishments that draw mature crowds and require formal attire. For New Year’s Eve, the Rainbow Room will host its annual Black-Tie Bash with passed canapes, a four-course menu, an open bar, and live entertainment with dancing on the historic rotating dance floor.  Champagne will be served before midnight and a ten-piece band will play a variety of musical styles, ranging from Frank Sinatra to Motown, disco, and current hits. If you’re looking for something especially exclusive (and willing to drop $20,000 for an extravagant night), you can opt for the Platinum Lounge, which hosts up to 20 guests and offers a prime view of the glowing Empire State Building and the ball drop from above.

The Top of The Standard

The Top of the Standard (also known as the Boom Boom Room) is one of Manhattan’s most stunning venues, with opulent retro interiors and sweeping 360-degree views from the Meatpacking District. The buzzy hotel’s rooftop is typically the after-party venue for the Met Gala, and although it keeps a notoriously tight door, the lines often extend around the street.  New Year’s Eve here is a ticketed affair, so party-goers can swiftly ascend to level 18 to embrace the revelry. Once inside, you’ll find tables stocked with bottles of Moët champagne and Belvedere Vodka (there are also general access tickets if you’ve decided not to completely splash out this NYE). From 10pm, the Pointer Sisters will be performing, and after midnight, DJs will continue into the early hours.

The Top of the Standard  Photo: Courtesy of Adrian Gaut

The Blond at 11 Howard

For those wanting to avoid the hustle of midtown, start your New Year’s Eve with dinner at the super chic La Mercerie (which snagged a spot on our Best of the Best list this year) for a prix-fixe dinner before hopping along a few doors down to the Blond at 11 Howard, which is hosting an open bar from 10pm until midnight.  Both venues are among the city’s most photogenic: you’ll find blue velvet banquettes, oversized floral arrangements, and stylish contemporary décor fit for a fashion editorial (or, you know, your Instagram feed). At the Blond, general tickets and tables are available—both will get you access to a midnight champagne toast and late-night DJs sets.

Inside the Blond  Photo: Courtesy of 11 Howard

The Ides at the Wythe Hotel

Don’t want to brave the holiday crowds in Manhattan?  No problem. The Ides at the Wythe Hotel offers some of the best NYC skyline views in the city—especially if you reserve one of its rooftop tables for its ticketed New Year’s Eve soirée ($150 per person). Guests that book tables will receive champagne and hors d’oeuvres on arrival. The bar is internal, but if the temperatures aren’t too frightful, guests can mingle al fresco on the outdoor terrace and overlook the city and Brooklyn rooftops below.

Grand Salon at the Baccarat Hotel

For something low-key but high-end, venture to the Grand Salon at the Baccarat Hotel, where the crystal brand’s grandeur is brought to life.  It is undoubtedly one of the most polished lounges in the city, as the space is adorned with chandeliers, elegant décor, and unique ornaments from Baccarat’s collections. Michelin-starred Chef Gabriel Kreuther was recently named the hotel’s culinary director, and reservations are available for $100 per table on New Year’s Eve, where an à la carte menu featuring everything from caviar and truffles to foie gras will be on offer. And for those who want to celebrate long into the first day of 2019, the Grand Salon’s holiday high tea will be on offer until January 1.

For over 100 years, the Plaza has been synonymous with old world grandeur, hosting some of the most opulent balls in the city. This New Year’s Eve will be no different as the Palm Court prepares to host a black-tie Masquerade Ball featuring dancers, aerialists, Krug champagne, and a live DJ. A ticket will set you back $850, and in addition to the theatrics and splendor of it all, guests can enjoy bespoke cocktails and a specially curated menu.

The Palm Court  Photo: Courtesy of The Plaza New York

Ring in 2019 at Fifth Avenue’s most elegant rooftop bar, Salon de Ning at the Peninsula New York. The hotel’s New Year’s Eve Rooftop Party commences at 10pm, and involves canapes, dancing, and a champagne toast at midnight. Cocktail attire is required and tables are available on a first come, first served basis. For those wanting to start the festivities by dining somewhere equally lavish, book in at the hotel’s restaurant, Clement (located an elevator ride away) for its black-tie Gala Dinner, which will also have champagne and sparklers at midnight and a DJ playing well into the early hours.

Another luxurious option is Armani Ristorante’s ‘Vigilia de Capodanno’ dinner on Fifth Avenue. The acclaimed restaurant by Giorgio Armani will be offering an exclusive prix-fixe New Year’s Eve menu for $350 per person, where refined Italian classics will be accented with indulgent black truffles and caviar. As you would expect in New York’s house of Armani, black-tie attire is required. Reservations are available starting at 5:00, but the real festivities will commence at 8:30pm.

The Rose Bar at the Gramercy Park Hotel is always a good option for a lively night where you can still hold a conversation. It’s one of the city’s most stylish cocktail bars with lavish décor, a grand fireplace, and iconic celebrity portraits by David LaChapelle. For New Year’s Eve this year, DJ Dexter, Love & Richie Quake will be playing from 10pm-4am. The event is non-ticketed, so we’d recommend getting started a little bit early to reserve a table. While there will be no open bar on offer, that table will grant you access to elevated bottle service, which will feature an array on fresh purées and fruit garnishes to be added to bespoke mixes.

At the chic Lower East Side bar Et Al. you can dance without being surrounded by club-bangers and crowds that are barely old enough to drink. For New Year’s Eve, its fun downtown vibe will be amped up, as Club Calco and Less Than Blake will be DJ’ing and champagne will be toasted at midnight.  The event is not ticketed, but if you’re looking to attend, you can RSVP to Et Al. in advance to secure a table and get on the guest list.