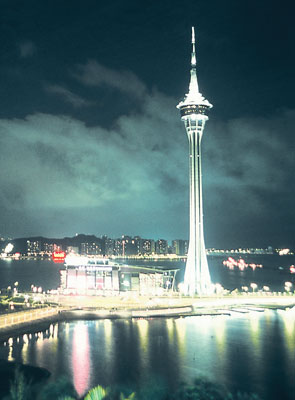 The new Sands Macao may be the world’s most profitable casino, but the downtown operation is only an ante in the high-stakes Chinese gaming market for the Las Vegas Sands Corp. The company’s CEO, Sheldon Adelson, is well into his plan to replicate the heart of the Las Vegas Strip on the mud bars and tidal marshes between Macao’s Coloane and Taipa islands.

Steve Daniel, the muscular, tattooed, and buzz-cut senior construction manager for Las Vegas Sands’ first development on the Cotai Strip (a name the company trademarked, along with the phrase “Asia’s Las Vegas” as a nickname for Macao), wrestles the wheel on his Toyota Land Cruiser to dodge dinosaur-size cement mixers and maneuver through a forest of rebar. Daniel and his crew began pumping sand into the marshes in late 2004, ultimately displacing 687 billion gallons of water by May 2005. They now pour 3,000 cubic yards of concrete per day, and by fall, 12,000 workers will be rushing to meet the spring 2007 opening date for phase one of the Venetian Macao.

When completed, the 3,000-suite, 10.5-million-square-foot Venetian Macao megaresort will dwarf even its sister property in Las Vegas. Its gaming floor will hold 710 tables and 5,000 slot machines. “The Galaxy, the Wynn, the MGM, and the Emperor [a 200-plus-room hotel that opened in January] would all fit inside the podium,” says Daniel.

The concept for the Venetian can be described as Venice by way of the Nevada desert: Only a Vegas-based developer would turn marshes into dry land and then retrofit the real estate with waterfalls, wave pools, and a river to create a simulacrum of a city sinking into the sea. Still, Adelson’s elaborate scheme has practical purposes.

Steve Wynn may have brought fantasy to Las Vegas, but Adelson made the city the trade-show capital of North America. The Venetian Macao will contain 1.2 million square feet of convention and meeting facilities as part of Adelson’s plans to transform Macao from a punter’s paradise into a multiday destination that is the gaming and trade-show center of Asia.

Adelson has a head start on Cotai, but not a monopoly. Major Chinese players will join the Venetian on the marshes in the coming years (see “Betting on Macao,” at the end of “Raising the Stakes“). MGM Mirage is not revealing its plans for Cotai, but in March, Wynn announced the sale of a subconcession to Australian media magnate James Packer and Hong Kong developer Lawrence Ho (Stanley’s son and Pansy’s younger brother) for $900 million—three-quarters of the cost to build Wynn Macau. Although Ho and Packer have not announced their construction plans, one thing is certain: All of the current licensees are aiming to open their hotels before April 1, 2009. That is the day the Macao government can begin granting more casino concessions.