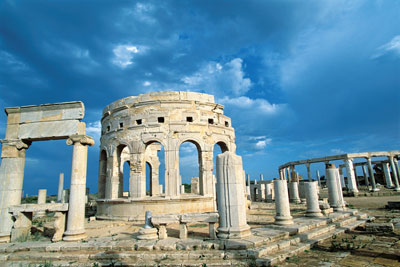 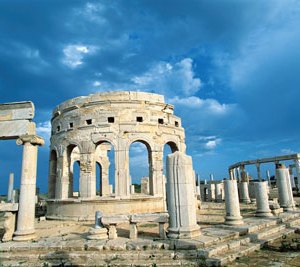 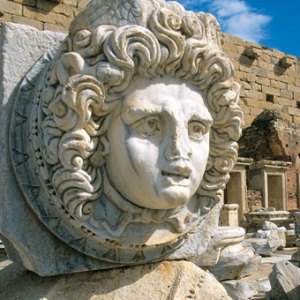 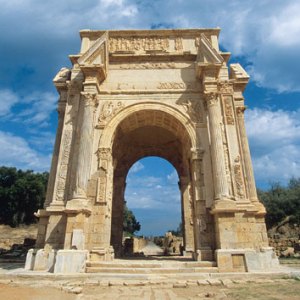 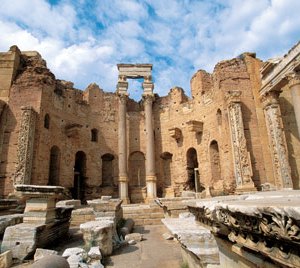 Antiquities expert Yousef al-Khattali recently made an archaeological discovery at Villa Silin, about 55 miles from downtown Tripoli. The late-first-century Roman villa overlooks the Mediterranean from a sandy ridge just west of Leptis Magna, one of Libya’s five UNESCO World Heritage sites and among the best preserved cities of the ancient world.

In 1974, a storm surge washed away the beach that had entombed Villa Silin for thousands of years, revealing a few roof tiles—a proverbial iceberg tip. The ensuing excavation uncovered an architectural gem comprising 20 rooms, some decorated with elaborate mosaics of the highest order, those known as emblema musivo to al-Khattali and other scholars. The scenes—formed with tiny stones and depicting activities ranging from chariot races at the nearby Leptis hippodrome to pygmies fighting crocodiles—are so finely rendered that they resemble paintings.

Compact yet powerful, the 50-year-old bespectacled al-Khattali gesticulates and jokes as he relays the villa’s history one warm, sunny afternoon last fall. He leads our group to an area near the home’s former gardens, squats in front of a step where some concrete has cleaved away, and points to a few painted brushstrokes depicting what appears to be a bird’s tail plumage. The image, he explains, is part of a fresco that probably was painted in the first century and then later covered with cement set with mosaic tiles—just as old wallpaper might be layered with more au courant designs. A hint of frustration tempers al-Khattali’s exuberance over his discovery, for in his current role as a tour guide, he can do little to ensure that the fresco is properly handled and preserved. However, he can warn his American charges, who are tempted to break away the crumbling veneer of concrete, that it is the only thing protecting the fresco from the ravages of sea, salt, and sun.

The destructive power of nature is evident throughout the villa. Stripped of their preserving sand sarcophagus and reinforced with well-intentioned but moisture-absorbing steel rods, many of the mosaics are beginning to degrade after only a few decades of exposure. While regarding the fresco fragment peeking from beneath its concrete veil, a member of our group comments, “So, the discovery here has been made solely by virtue of neglect.”

Such is the paradox of modern Libya, where remnants of the ancient world have slumbered in obscurity, with minimal efforts to protect or restore them, almost as if they were in a time capsule. The sprawling Roman city of Leptis Magna has been only partially excavated—primarily in the 1930s by archaeologists working for Italy, which governed Libya at the time. The train tracks they used to haul away the detritus are still in place, along with what remains of the city’s baths, gymnasium, basilica, circus, two forums, six triumphal arches, and an amphitheater that was built in A.D. 56, during Nero’s reign. Some of the other limestone structures, including the market, date to 8 B.C. A massive earthquake in the middle of the fourth century ultimately toppled this cosmopolitan Roman capital. Leptis Magna is just one of Libya’s remarkable Roman sites that Americans can visit, thanks to the recent years’ slowly warming relations between the U.S. and Libyan governments. Still, exploring Libya independently can be daunting, despite the enthusiasm of the locals who are eager to share their country’s cultural prizes.

TCS Expeditions of Seattle is among the American tour operators that have added Tripoli to their itineraries, though many of those companies, including TCS, may have to cancel future visits because of lengthy delays in American visa approvals in recent months. Known for trips that explore more exotic destinations without sacrificing travelers’ comfort and security, TCS is a favorite among those who already have visited popular tourist meccas. Many in our group are repeat TCS travelers and seasoned world explorers who were drawn to this particular tour by the opportunity to set foot in the once-forbidden territory of Libya.

Following his 1969 coup, Col. Muammar al-Qaddafi renamed the country the Great Socialist People’s Libyan Arab Jamahiriya (state of the masses). He conceived Jamahiriya as an alternative government and economic order that balanced aspects of communism with capitalism. But despite his system’s pretense of advocating forms of democracy, Qaddafi became one of the world’s most notorious dictators, and his country remains on the U.S. State Department’s list of state sponsors of terrorism.

In 1986, President Ronald Reagan ordered the bombing of Qaddafi’s Tripoli compound and other targets in retaliation for a Berlin discotheque blast that killed two U.S. soldiers. The hostile relationship continued as Libya harbored the Libyan terrorists who were convicted of the 1988 explosion of Pan Am Flight 103 over Lockerbie, Scotland. Libya suffered from increasing political and economic isolation until 1999, when Qaddafi handed over the bombers and made reparations to the victims’ families along with other accommodations that would allow his country to rejoin the international community. The United Nations lifted its sanctions in September 2003, and that December, within a week of the apprehension of Saddam Hussein in Iraq, Qaddafi stated that he would rid his country of weapons of mass destruction. In response, the United States renewed most trade and diplomatic relations with Libya in September 2004, seven months after removing travel restrictions for American tourists, who can apply for visas through the Libyan People’s Bureau in Ottawa, Canada. (Libya does not have a consulate or embassy in the United States.)

Jets bearing the logos of Swiss Air and Lufthansa sit parked at Tripoli airport as we unload from our private all-business-class Boeing 757. We have been warned that alcohol is strictly forbidden and will be confiscated, credit cards are virtually useless, and toilet paper is a rare find in public facilities. Smiling children wearing native costumes—boys in simple robes and girls in colorful ensembles with head-scarves—offer candy and charm us with a photo op at passport control. But outside the airport, the scene is not as sweet. Plastic shopping bags, bottles, tires, and other refuse clutter the roadsides. We are informed that garbage collection had been suspended so that the saved funds could be used for housing and education.

The country has just celebrated the 36th anniversary of Qaddafi’s rule, and throughout Tripoli there are billboards depicting the self-proclaimed Leader against a backdrop of heavenly rays, with a smile on his face and his hands clasped in victory. While the colonel may remain the poster boy for Libyan defiance, he appears to have recognized that working with the West politically and economically can potentially strengthen his power domestically and abroad. Some speculate that his pro-democracy son, Seif al-Islam, who is believed to be his father’s successor, is another influential force behind the fledgling Libyan perestroika.

Tripoli’s new Corinthia Bab Africa hotel could be viewed as Qaddafi’s welcome mat to Western visitors. In the lobby of the country’s only five-star property, a pianist plays the Moody Blues’ “Nights in White Satin” as we place our bags on the X-ray belt and walk through the metal detectors. Asian and Italian businessmen discuss their deals over coffee instead of single-malt Scotch, and African families plan dinner in one of the hotel’s restaurants—Italian, Asian, or Moroccan. Were it not for the extreme security measures and the lack of a bar, we could be in Houston.

The Corinthia’s soaring glass towers, located just outside the walls of Tripoli’s old town, are a symbol of Libya’s conservatively optimistic economic outlook. Libyans hope that the country will prosper from trade and tourism the way that it should have after the discovery of oil in 1959, when it became one of Africa’s wealthiest nations. But the concentration of that wealth in the hands of a few is what spurred Qaddafi’s socialist revolution. A subsequent so-called golden era ushered in improvements in housing, education, and infrastructure for the masses, but decades of punishing trade sanctions and corruption have exacted a toll on the Libyan economy. Today, Libya’s dusty roads and lackluster cement buildings represent a stark contrast to the glittering skyscrapers and immaculate boulevards in the city of Dubai—an entity that capitalized on its oil reserves—where our group visited only a week before.

Oil of another kind—olive—drove the economy of Leptis Magna during its Roman glory days in the second and third centuries. At that time, olive oil was one of the only fuels available and was used for lamp oil, as well as soap, perfume, and, of course, cooking. It was considered so precious that in 46 B.C., Julius Caesar ordered Leptis to pay a fine of 3 million pounds of olive oil as punishment for sheltering Cato, the commander who served Pompey, Caesar’s archrival.

Today, archaeologists have excavated only an estimated 30 percent of the city, leaving one to ponder what treasures remain buried at Leptis. “The ruins here are magnificent for their size and preservation,” says Jack Daulton, an expert in art and architecture and one of TCS’ lecturers. “There are also so few visitors here, which is very rare. Other comparable ancient sites, such as Ephesus, are crowded in comparison.”

Although Leptis’ archaeological remains date only as far back as the Roman era, the Romans were not the first to recognize the value of Leptis as a port city with a natural harbor. Phoenician merchants founded Leptis Magna about a thousand years B.C. In succession, Greeks, Carthaginians, Romans, Vandals, Byzantines, Arabs, Ottoman Turks, and Italians later colonized it. (The Italian government also oversaw the excavation of Sabratha, a less impressive Roman outpost regarded for its fine mosaics and restored amphitheater.)

Some of Libya’s most prized artifacts have been relocated to Tripoli’s Jamahiriya Museum. The castlelike building is crowned with the mast of the U.S. frigate Philadelphia, which Tripolitanian pirates captured in 1803. The museum’s galleries showcase relics tracing the many cultures that have ruled Libya over the millennia. One room displays one of the world’s finest examples of mosaic art, a richly detailed first-century flora-and-fauna scene that experts have touted as being even finer than the masterpieces of neighboring Tunisia. A preceding gallery presents, with no intended irony, a more modern artifact: the light blue Volkswagen Beetle that the Leader drove while masterminding his revolution.

Greeting visitors in the museum’s entrance hall is a statue of a naked Venus, a second-century Roman replica of the Capitoline Aphrodite that once adorned the Leptis site. The Italian government gave the statue to Hermann Goering in 1939, but the piece was returned to Libya in 1999, after it had surfaced in a private German collection. Libya never will recover many of Leptis’ stolen relics, including the hundreds of gigantic green marble and red granite columns that now stand at Windsor Castle, Versailles, and Paris’ church of St. Germain-des-Prés. However, three monumental green marble stragglers still sit entrenched on the beach at Leptis. The French consul left them there at the turn of the 18th century, because he could not find a barge strong enough to carry them to France.

Many of Libya’s more portable ancient treasures remain vulnerable to such pilfering, and to decay. Until the country has the resources to protect and restore its artifacts, such as the mosaics at Villa Silin, they are perhaps best left where they have spent the last few thousand years: under the sand.