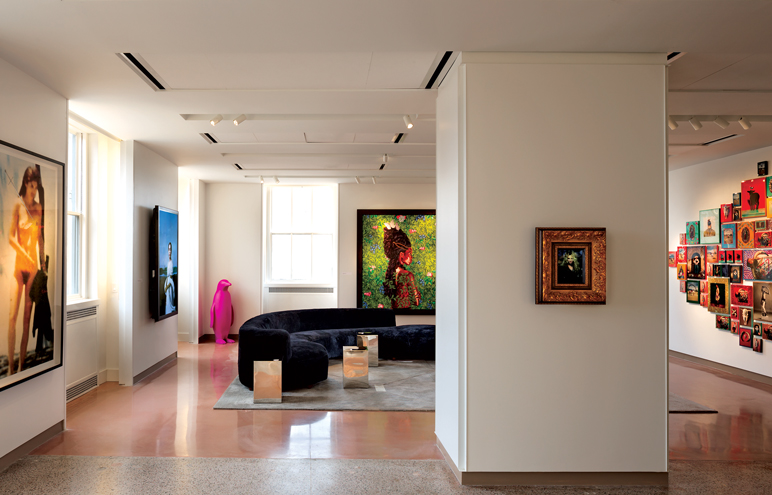 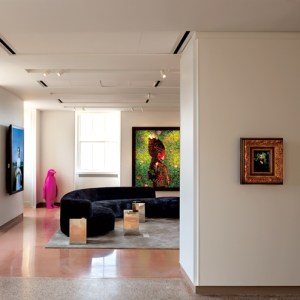 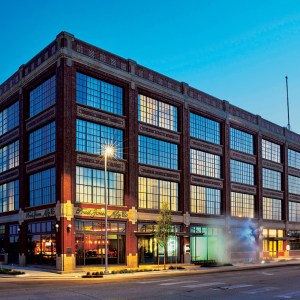 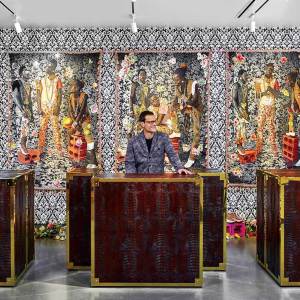 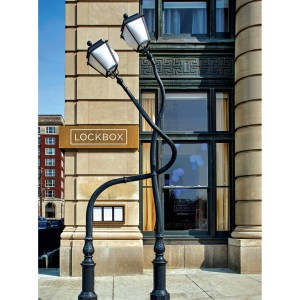 A stay at a 21c property promises to surprise and delight.

Anyone who pauses to admire the brick, steel, and glass exterior of Oklahoma City’s old Ford Motor Company assembly plant could become enveloped in a sudden cloud of mist issuing from Woozy Blossom. The 16-foot-high perforated steel skeleton of a tree planted in the sidewalk is the first hint that the 21c Museum Hotel Oklahoma City aims to surprise. Inside the lobby, a 4-foot-tall purple plastic penguin leaves no doubt.

Opened in June, Oklahoma City is the latest property from 21c Museum Hotels, which launched in Louisville, Ky., in 2006. “It was considered quite risky by our family, our friends, and our bankers,” says cofounder Steve Wilson. To make their contemporary art collection accessible to the public and to revitalize their hometown’s core, he and his wife, Laura Lee Brown, converted old bourbon and tobacco warehouses into an art museum, 91-room hotel, and award-winning restaurant. “We never expected to be doing more than one. But after the success of Louisville, people in other communities wanted us to partner with them. So here we are, 10 years later, with six hotels and more on the way.”

For each hotel, the Milan-based Cracking Art Group created a limited-edition flock of penguins in a signature color. Besides penguins, what unites the properties, says chief curator and museum director Alice Gray Stites, is that “each is a museum first and a hotel second.” Think of 21c properties as museums that happen to have sleeping rooms. The hotels also strive to anchor the revitalization of downtown districts. In Oklahoma City, that’s Film Row, an up-and-coming entertainment strip where Hollywood studios once distributed movies throughout the Midwest.

Deborah Berke Partners, a firm based in New York, has collaborated on all of the 21c properties for architecture and interior design, including custom furniture and lighting. Berke, who became the dean of the Yale School of Architecture in July, relishes adapting historic structures—work amply afforded by 21c’s projects. The Oklahoma City plant was designed more than a century ago by Albert Kahn for Henry Ford. The Lexington, Ky., hotel occupies a beaux arts bank building by the turn-of-the-century firm McKim, Mead & White. The Durham, N.C., hotel is a modernist skyscraper created by Shreve, Lamb & Harmon, architects of the Empire State Building. “The extraordinary record of 21c in creative, adaptive reuse,” Berke says, “has let us engage in a time-lapse collaboration with some of the great architects of the 20th century.”

The Oklahoma City hotel is 21c’s first industrial building. Opened in 1916 with a pioneering assembly line, the four-level factory had steel-framed glass curtain walls and concrete-slab floors supported by tree-trunk-like octagonal pillars. The high ceilings and simple, open floor plan work just as well today to show contemporary art as they once did to assemble cars. Berke carved out 14,000 square feet of ground-level galleries with white walls and polished concrete floors.

Curator Stites draws from 21c’s collection of more than 2,500 works by living artists to mount two exhibitions per year at each property. The shows often feature wit and whimsy but also embrace tougher subjects addressed by some contemporary artists. “I think artists can stimulate thought and conversation that very often people might avoid and think unspeakable: sex and death and slavery and war,” says Wilson.

The ambience of a gallery opening prevails as guests sip glasses of wine from the bar while they view the work. Each 21c hotel features site-specific installations; in Oklahoma City, Matthew Geller’s Woozy Blossom and James Clar’s River of Time are two of four such works. Clar’s kinetic sculpture is a moving conveyor belt covered with semitranslucent sheets of blue and white acrylic to create the illusion of flowing water. It doubles back on itself like a hillside stream to cascade over LED light bars that tell time in a digital display. River of Time draws guests from the lobby into the restaurant lounge, which retains its original terrazzo floor. “That space was the showroom for the finished cars,” says Stites. “Now we’re showcasing a work of art that is moving, and that relates to nature, new technology, and the passage of time.”

A long dogleg bar of reclaimed heart pine wraps around an unretouched concrete column—a deft balance of warm wood with cold concrete. The bar has an extensive bourbon list, which the founders consider key to their modern take on Southern hospitality. It’s also a nod to 21c’s Kentucky roots—Brown’s family controls the Brown-Forman liquor empire.

Adjacent to the lounge, the restaurant Mary Eddy’s is named for the wife of Fred Jones. An early assembly-line worker at the Ford plant, Jones eventually bought the building to manufacture and recondition Ford parts. His heirs partnered with 21c to develop the museum-hotel.

At the reclaimed-wood bar inside the restaurant, diners can watch chef Jason Campbell and crew work in the open kitchen. The main seating area is divided by two-tone blue banquettes quilted and upholstered to evoke the voluptuous automobile bench seats in behemoth U.S. cars of the late 1950s. Octagonal hoop lights descend from the high ceilings like halos—an oblique reference both to the octagonal columns and to the wheels of the Model T.

Corridors on the guest-room floors are as wide as roadways. Columns march down their length, conveying a triumphal sense of scale. Around the exterior walls, loft suites range from 755 to 1,105 square feet. “We wanted to create a sense of loft living where the space is high-ceilinged and strong, but the furnishings are normally sized and have beautiful fabrics,” Berke says. In all, there are 134 rooms and suites on three floors, plus the penthouse suite.

A central cube rising only three-quarters of the way to the ceiling helps retain the spacious urban feel of the loft suites while carving up the sheer volume of the space. Separating bedroom from living room, the cube encloses the bathroom and dressing area. The rift-cut white-oak veneer on the cube is echoed by the bed headboard and attached floating bedside stands. Minimalism carries over into the living area: A boxy sofa upholstered in soft tweed sits at one side of a reclaimed-wood coffee table. Two leather sling chairs with soft blue cushions form a conversational arrangement. Behind the couch, a reclaimed-wood desktop sits in a black metal frame. Adding more texture and a personal touch is a large Laura Lee Brown photograph—she is a painter and photographer—printed on a quilted moving blanket.

With windows that wrap around the open-concept living and dining area, the 2,828-square-foot two-bedroom penthouse suite is surrounded by Oklahoma sky. Minimalism turns monumental here. A three-sided sectional couch—matte charcoal with textured-weave cushions in reflective dark gold—seats nine around a huge tufted brown leather ottoman. The dining table seats 12, and catering is available from Mary Eddy’s. A folding glass wall opens to a 2,220-square-foot outdoor terrace and garden with sweeping views of the downtown skyline. The rooftop water tower looming overhead—saved as part of the building’s landmark status—pays homage to the Oklahoma City past and lives on as a work of art.  21c Museum Hotels (21cmuseumhotels.com)