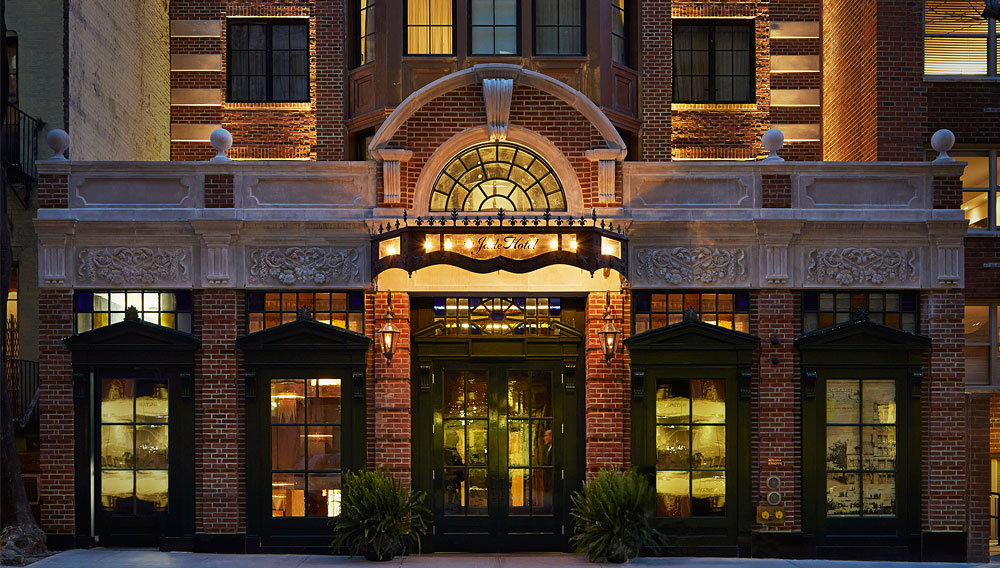 From Midtown’s landmark hotels to Downtown’s chic boutiques, Manhattan has long been the epicenter of luxury travel. This fall, visitors to the Big Apple have even more reasons to check in, thanks to a range of new hotels offering innovative amenities and stylish accommodations. In the city that never sleeps, these newcomers are reason enough to stay the night.

Following two years of renovations, the former Buckingham Hotel will reopen in October as the Quin (from $450 per night). Situated two blocks from Central Park and a short walk from the Museum of Modern Art, Fifth Avenue shopping, and Carnegie Hall, the hotel—with 208 rooms and 28 suites—draws from the Buckingham’s past as a city escape for musicians and artists. The hotel’s most famous former guest, the American painter Georgia O’Keeffe, is honored with an eponymous specialty suite featuring earthy tones. In the lobby, the details are thoroughly modern, and leather-wrapped columns, handblown glass chandeliers, and gold-leafed ceilings add touches of sophistication. For access to the city’s top experiences, guests can rely on Quin Attaché, the hotel’s concierge team, which provides everything from premier seating at New York Fashion Week to sold-out tickets to the U.S. Open. (212.245.7846, www.thequinhotel.com)

Opening in October near Columbus Circle, the Viceroy New York (from $559 per night) will be an uptown hotel with a sleek downtown style. The work of the New York–based designers Roman and Williams, the hotel’s bespoke interiors will feature details such as Paonazzo marble, exotic woods, and figured stone. In the 241 rooms, guests will find custom furnishings, Sferra linens, and floor-to-ceiling windows (many with views of Central Park), while on the rooftop lounge they’ll enjoy innovative cocktails on an ipe deck and walnut-and-leather sofas. At street level, the hotel’s restaurant and bar, Kingside, will be helmed by Scott Gerber and the celebrity chef Marc Murphy. (212.830.8000, www.viceoryhotelsandresorts.com/en/newyork)

The timeless style at the Refinery Hotel (from $399 per night) owes largely to its early-20th-century neo-Gothic architecture, as well as its former life as a millinery factory. Opened in May, the Garment District hotel preserves its history well, with restored vaulted ceilings, brass fixtures, and oak floors that lend an industrial aesthetic. Balancing that out are elegant interiors featuring handmade wool rugs, original art, and custom furnishings such as the sewing-machine-inspired writing desks in the guest rooms. The hotel’s American bistro, Parker & Quinn, resembles a speakeasy with tufted-leather booths and vintage photographs in gold frames, while a rooftop bar affords views of the neighboring Empire State Building. (646.664.0310, www.refineryhotelnewyork.com)

The final phase of the New York Palace’s extensive $140 million renovation will conclude in October, ending 16 months of construction. The makeover includes a $25 million redesign of the Palace’s “hotel within a hotel,” the upscale Towers rooms and suites, which drew inspiration from the property’s historic Villard Mansion. The redesign employs wood- and silk-grain paneling and 19th-century patterns alongside contemporary art and state-of-the-art Crestron technology. Equally elegant is the hotel’s new main lobby, created by the New York–based firm Champalimaud Design, which features a gold-leafed dome, Nero Marquina and Carrara marble, and Italian-silk wall panels. In addition to the 909 newly designed rooms and suites (from $475 per night for the main hotel and from $625 per night for the Towers), the hotel is also launching six new restaurants and bars, two of which will be helmed by chef Michel Richard, and an exclusive lounge. (212.888.7000, www.newyorkpalace.com)

The Parisian furniture artisan Emile-Jacque Ruhlman was the inspiration behind the design of the guest rooms at Greenwich Village’s Jade Hotel (from $400 per night), which opened in March. Though newly constructed, the hotel’s Georgian-style architecture, decorative brickwork, and copper-clad bay windows allow it to blend seamlessly with its prewar neighbors. Inside, art-deco details abound. Guest rooms feature red velvet drapes, chrome lamps, and desks of marble-inlaid macassar ebony, while the dimly lit library and lounge are filled with tufted-velour couches, rich dark wood paneling, and marble-tiled floors. In the Grape & Vine restaurant and bar, artisanal farm-to-table cuisine is served among red velvet banquettes and vintage distressed mirrors. (212.375.1300, www.thejadenyc.com)

Also located in Greenwich Village, the Marlton Hotel (from $275 per night) will debut in September in an iconic building that has served as a home for such icons as Jack Kerouac and Neal Cassady. The historic structure has been well preserved, maintaining the original floor plan and prewar architecture. Small rooms are an unfortunate result of the old layout, but beautifully restored details such as herringbone wood floors, crown moldings, brass fixtures, and marble bathrooms add significant charm. Additional highlights will include a 100-seat restaurant and coffee shop. (212.321.0100, www.marltonhotel.com)