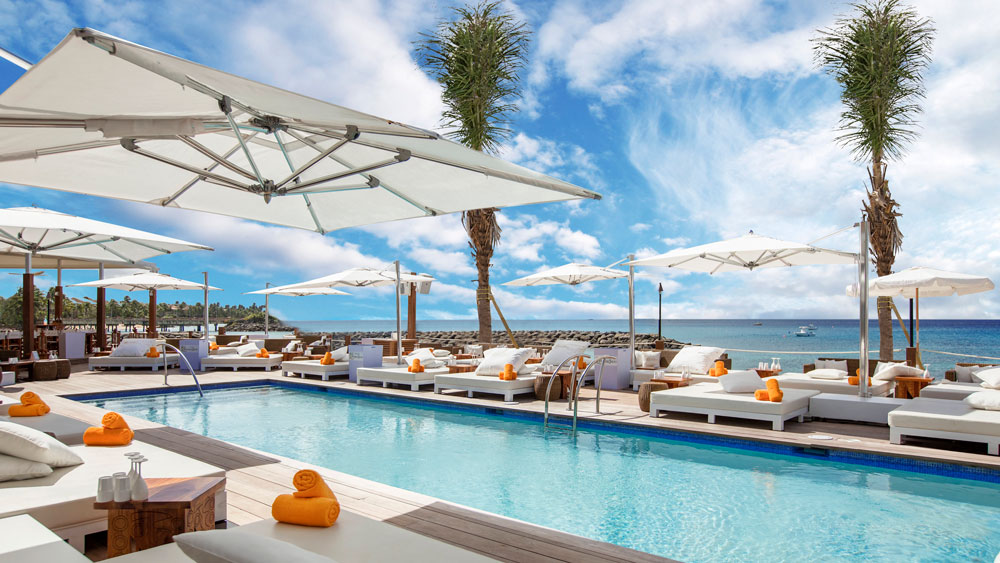 A saxophonist plays alongside a funky DJ, and waiters groove to the beat as they deliver carved serving boats loaded with sushi, magnums of Dom Perignon, and platters of lobster and perfect fillet steak. A couple of would-be supermodels float in the pool sipping rum mojitos, a table of diners jump up to dance, and the occasional turtle paddles by in the turquoise blue bay. This is Barbados. More specifically, it’s an average Sunday at the brand-new Nikki Beach Barbados, a beach club so decadent, it’s reason enough to come to the Caribbean.

First conceived in Miami, Nikki Beach’s luxe concept has since spread worldwide, and includes clubs in St. Tropez, Mallorca, Monaco, and Koh Samui, along with an annual pop-up at the Cannes Film Festival. The brand’s move to Barbados is evidence that the island—long lacking the luxury of neighboring islands like St. Lucia and St. Vincent and the Grenadines—is now seriously in vogue.

Another factor in the island’s favor: its outlying position leaves it mostly untouched by hurricane season. In fact, there’s no sign of damage following the weather that devastated other Caribbean hot spots last fall. It’s no surprise then that Nikki Beach CEO Lucia Penrod felt laidback Barbados was the perfect home for the hospitality brand’s newest club. “It’s a really good, cozy feeling in Barbados, [and] the people are amazing,” she says.

The Nikki Beach experience also benefits the island. “We do our best to create menus with ingredients known by the people from each location,” founder and chairman Jack Penrod says. “Every dish has a little bit of a different flair based on where you are.” At the new Barbados club, it’s all about fresh-caught seafood with touches of Bajan flavor.

So far, Penrod reports Nikki Beach Barbados has been a huge hit with both the international yachting crowd and locals alike. “They’re telling their friends,” he says, “which goes along with our theme: We don’t advertise. We just ask you to tell only your best friends.”