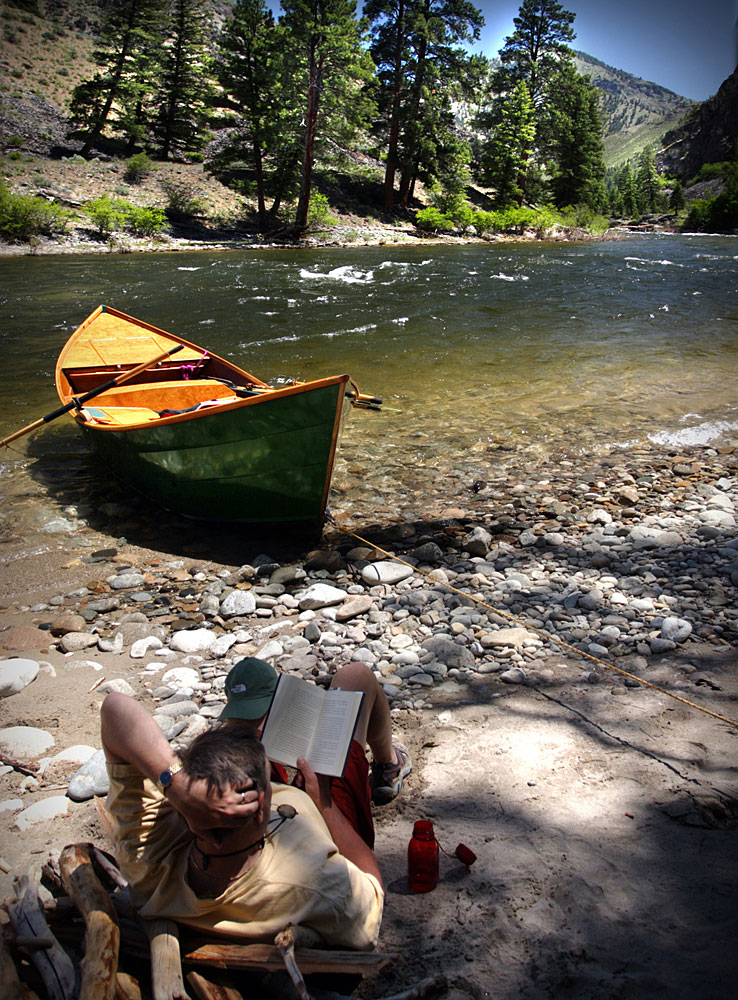 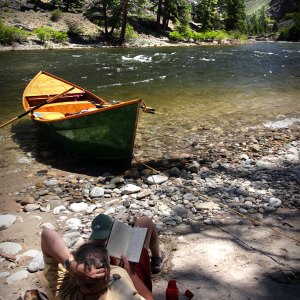 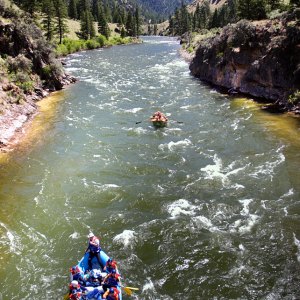 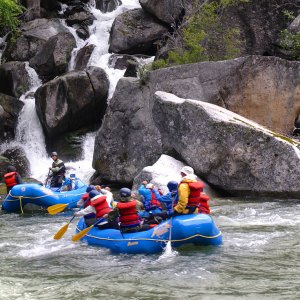 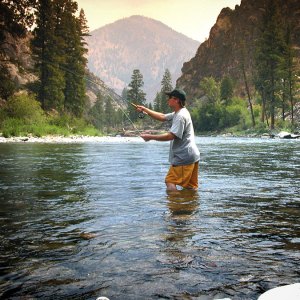 We are enjoying a 2003 Bredif Vouvray Chardonnay and awaiting the crab cake appetizer’s arrival when the maître d’ announces, “Moose.” He lifts one of his arms, which is cloaked in the sleeve of a stiffly pressed white shirt, and points to a 1,500-pound bull plodding not more than 50 yards from our linen-covered table. The sight is only mildly surprising, for we are dining in a meadow in central Idaho, deep in the largest wilderness area in the lower 48.

I had joined the dinner party a little late. After a long day on the water, I had lingered under a hot shower and then arrived 10 minutes tardy for my predinner massage. Still, I made it to the table in time to see the moose and watch it disappear into a forest of 50-foot-tall ponderosa pines on the far side of the nearby river, the Middle Fork of the Salmon River. When a toast is raised to the moose, I notice that my glass is empty and nod to the maître d’. In a moment, the Chardonnay is returned to its high-water mark—like the Salmon after snowmelt.

Our host for dinner and for the week is Steve Lentz, who operates Far and Away Adventures, which he founded in Sun Valley, Idaho, 28 years ago, two years after his first trip down the Middle Fork. Following that initial journey, the strapping, 53-year-old native of Bakersfield, Calif., was hooked—like a cutthroat trout at the end of an angler’s line. The fish, a member of the salmon family, is named for the distinct reddish markings on its lower jaw. Lentz’s guests catch cutthroats by the boatload during five-day, 100-mile rafting and fishing trips down the Middle Fork. (Far and Away runs the trips from early May through September.)

After establishing his company, Lentz identified what he saw as a void in wilderness travel, and so he began adding elements of luxury to his trips: hot showers, massages, gourmet meals served on fine china. “We are trying to bring a degree of civilization out here,” he says, “a high-service platform to people who want a better experience.” The logistics of bringing civilization to the Idaho wilderness are daunting. Two sweep boats—large urethane rafts carrying crews of three Far and Away staffers apiece—depart early each morning from the existing campsite and travel to the spot where the rafters will stop later that day. (One of the boats is captained by our maître d’, who, despite repeated requests, never explains where his freshly pressed white shirts come from.) The boats carry to the campsites large, chalet-style tents in which guests sleep. They also transport the massage tables, the dining tables and chairs, the equipment for the lavatories and hot showers, and the cookware and food, all of which is organic. While the crews are setting up the new campsites, the guests—16 of them on this particular trip—navigate the river in smaller craft: 14-foot-long urethane rafts or 8-foot-long inflatable kayaks.

Kenny Rudolph, one of two Idaho chefs to receive James Beard House awards, prepares all of the meals in Sun Valley before the start of the trip and then freezes them. He stores the food in the holds of the sweep boats, using the cold river water as a source of refrigeration. The meals are packed so that each is thawed and ready to be cooked at the appropriate time. The dinner in the meadow included rack of lamb marinated in port and rosemary and then grilled over mountain mahogany, a tabbouleh salad, and a dessert of fresh fruit with crème anglaise.

in 1805, just upstream from where our moose trod, Meriwether Lewis and William Clark were forced to turn back and look for another route to the Pacific. Clark wrote, “The water runs with great violence from one rock to the other on each side foaming and roreing thro [sic] rocks in every direction, so as to render the passage of anything impossible.”

In the mid-19th century, the waterway became known as the River of No Return. Boat crews would brave the rapids to transport supplies to the mining towns of western Idaho. However, when they reached their destinations, the craft were broken up and sold as lumber, because you could, with luck, descend the river, but the force of the rapids rendered a return trip impossible.

Ours also will be a one-way journey. Our flotilla of sweep boats, rafts, and kayaks will wind its way from the Boundary Creek launch site through the Frank Church River of No Return Wilderness area. (Church was the longtime Idaho senator who sponsored the 1964 Wilderness Act and 1968 Wild and Scenic Rivers Act.) Our take-out point will be just beyond the sheer, granite walls of Impassable Canyon, a spot where eagles and osprey soar overhead and otters frolic in the river’s pools. From there, we will return to Sun Valley by car.

The Middle Fork of the Salmon River has no dams, but in the 1930s, construction of large hydroelectric stations on the Snake and Columbia Rivers, into which the Salmon drains, ended the chinook salmon runs. The river now is full of cutthroat trout (Lewis and Clark both wrote about the fish), and it contains smaller numbers of steelhead trout and rainbows. A strict catch-and-release law protects all of these species. The cutthroats, which run from 6 inches to about 2½ feet in length, congregate in the calm, deep pools between rapids.

The Middle Fork will test your mending skills—your ability to control the line and fly in fast-moving water—but you actually see the trout slowly rise through the water toward dry flies on the surface; the water is so clear that the splash of green along a cutthroat’s bloodred jaw will shine brightly in the sunlight. On a good day, you can expect to catch, and release, dozens of trout.

Navigating the river can be decidedly more challenging than catching cutthroats. The Middle Fork drops 12 feet for every mile, and at Velvet Falls, a 30-yard-wide alluvial deposit of a dozen boulders, the water pours through the obstacles in glossy tongues. Like icebergs, the rocks are mostly submerged, especially in late May, when the river is high from the recent snowmelt. However, the water is as clear as glass, and the full girth of each boulder is visible.

“This is a classic hydraulic, different from a technical rapid,” explains Lentz as we approach Velvet Falls, on day four of the trip. “Water is spilling over the rocks and turns back against itself. It’s tricky when you’re in a raft, due to the current wanting to pull the craft upstream and back into the froth. This is what can capsize a boat.”

Facing downstream, Lentz wields two oars in the back of a McKenzie drift boat designed for use in the white-water rivers of the Pacific Northwest. “I use a boat constructed of an African plywood called sepelle,” he says. “It’s harder than American marine plywood and has a dark, mesmerizing pattern to the grain.” The 16-foot-long craft has a wide, flat bottom for a low draft, and a narrow bow. The design allows for the deft maneuvering that Lentz employs to get us through Velvet Falls high, if not entirely dry.

“You’re wearing half the river,” he says, after a wave nearly washes me off my perch in the front of the boat. I am cold and wet, but a hot shower and massage await at the newly erected campsite. And a glass of wine, a fine dinner, and a comfortable bed that night—and a pot of fresh coffee sitting outside the tent in the morning—will prepare all of us for another day in the wilderness.