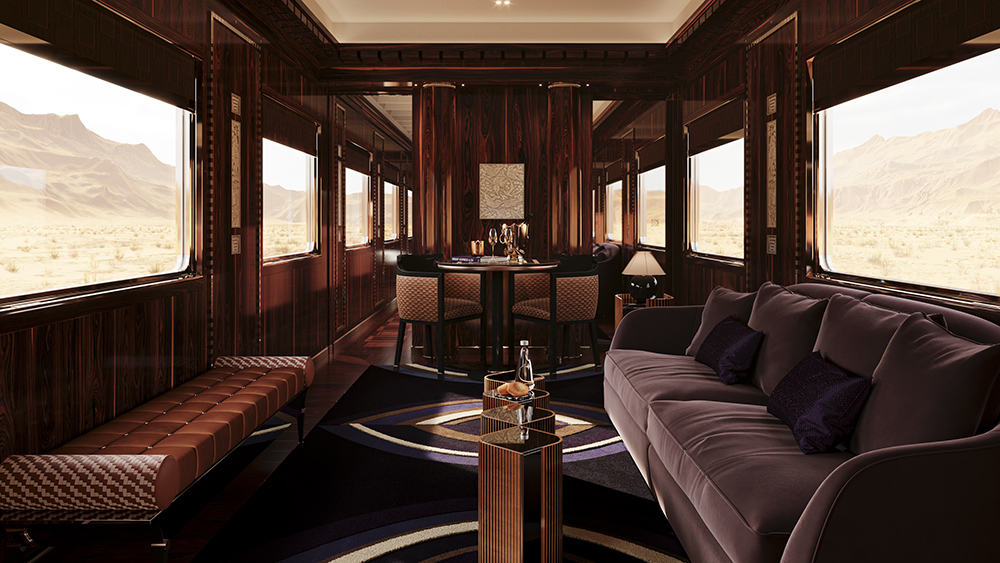 The French hospitality group just unveiled the interiors of the locomotive’s prized Presidential Suite ahead of an immersive experience at Design Miami this week. It’s a lodging that’s steeped in history, too.

For the unversed, Accor has decided to repurpose 17 historic carriages from the first Orient Express trains that Georges Nagelmackers launched in the late 1800s for the new locomotive. Orient Express 2.0, which is set to debut in 2025, has been entirely reimagined by French architect Maxime d’Angeac yet still oozes the glitz and glamor of its old-world predecessors. The newly revealed accommodation is further proof of that.

“The Orient Express Presidential Suite captures the essence of the future train,” Maxime d’Angeac said in a statement. “It is a work carved out of excess, inspired by the geniuses and pioneers of Art Deco, Jacques-Émile Ruhlmann and Armand-Albert Rateau, and by the importance of refinement and the absolute finesse of detail.”

Indeed, the top-tier suite occupies an entire car from the former Nostalgie-Istanbul Orient Express. Measuring 69 feet long by nine feet wide, it offers almost 600 square feet of living space. The carriage is anchored by four dramatic columns that feature a fireplace on one side and beautiful Lalique panels on the other. The spacious bedroom is replete with rich velvet and ornate custom furniture, while the elegant bathroom tributes Rateau with Art Deco styling.

“It is a suite where travelers can experience history, extreme luxury and ultimate comfort all at once,” the architect adds.

If that’s not enough, the Presidential Suite opens to a secondary “LX” luxury cabin from 1929. It is adorned with solid mahogany and marquetry that was found aboard the original train and meticulously restored. It also comes with two plush beds for your compadres. To top it off, the cabin opens to a secret room, known as the “Cabinet de l’Égoïste,” which is dedicated to “good vibes and epicurean festivities.”

Elsewhere on the train, the Bar Car nods to the 1920s with large domes of light inspired by the Second Empire style and a glass counter that pays homage to French jeweler René Lalique. Each table also sports a special call button just for Champagne. Not to be outdone, the Dining Car is outfitted with a striking mirrored ceiling and partitions featuring a reinterpretation of a “rail” motif that Suzanne Lalique-Haviland conceived in the 1930s.

If you’re eager to “walk” through the new train, stop by the Orient Express installation at the Design Miami fair. The VR experience, which will run from November 30 to December 4, showcases the restored locomotive in all its glory.