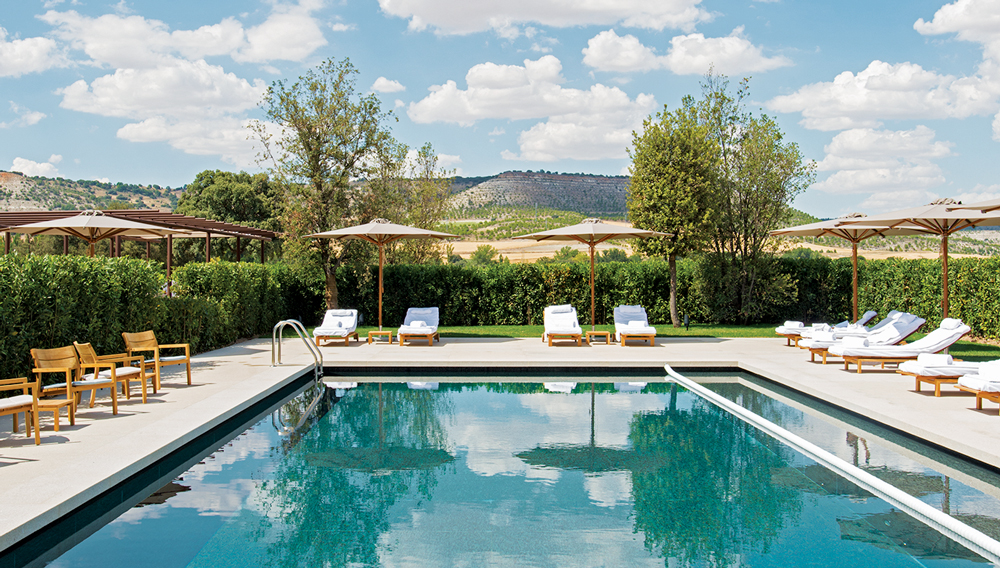 In Spanish wine country, a new spa takes cues from the vine.

It is a blazing summer afternoon in Spain’s Duero Valley as Sonal Uberoi uncorks a bottle of Abadía Retuerta Pago Valdebellón. She pours a single glass and hands it over, advising me to “see, swirl, and sniff” before sipping. I dutifully churn the Cabernet Sauvignon in its glass, admiring its deep ruby hue and commenting on its sweet yet spicy scent. Taking a sip, I note fruity and herbal flavors—and, I add hesitantly, perhaps a hint of oak? Uberoi confirms my suspicion before uncorking our next selection, Abadía Retuerta’s Selección Especial, and pouring me another glass.

Though she guides me expertly through the vintages, Uberoi is no vintner—and we are not in a tasting room or winery. Rather, I am clad in nothing but a robe and slippers, sitting in the subterranean reception room of El Santuario LeDomaine Wellness & Spa. Opened in June at the Abadía Retuerta LeDomaine hotel—where Uberoi is the wellness director—the 10,000-square-foot center brings the estate’s wines to the world of wellness with “spa sommeliers” who ­develop bespoke programs based on patrons’ preferences in pretreatment tastings. “In understanding your palate,” Uberoi explains, “we can determine your preferences for the types of treatments and ingredients that are best for you.”

Whether or not I believe my palate is a window to my wellness needs, I am happy to oblige Uberoi in her investigation. After all, Abadía Retuerta’s Tempranillo, Cabernet Sauvignon, and red blends such as the Selección Especial have been critically praised since the vineyard’s first vintage in 1992. In 2012 the winery opened Abadía Retuerta LeDomaine, a Relais & Châteaux hotel set within a 12th-century baroque Romanesque abbey overlooking the vineyards. Last year, the hotel’s restaurant, Refectorio, was awarded its first Michelin star. With the debut of El Santuario, which was constructed mostly underground to maintain the property’s historic ambience, the hotel has now added eight guest rooms, five treatment rooms, and indoor and outdoor swimming pools.

Based on my palate, which is partial to the intense flavors of the Pago Valdebellón, Uberoi suggests a personalized two-day roster of therapies, including a spirulina algae wrap; a cryotherapy treatment; and Le Grand Cru, El Santuario’s signature oenotherapy treatment comprising a foot ritual, a deep-body exfoliation, and a massage with yuzu oil. Between sessions, I exercise with Abadía Retuerta’s personal trainer, hiking and cycling through the rolling vineyards. I also pay a visit to Abadía Retuerta’s winery, where I am once again instructed to see, swirl, and sniff before sipping. By now an expert, I declare a hint of oak to the Pago Valdebellón and a big, fruity finish to the Selección Especial. All that is missing are my robe and slippers.